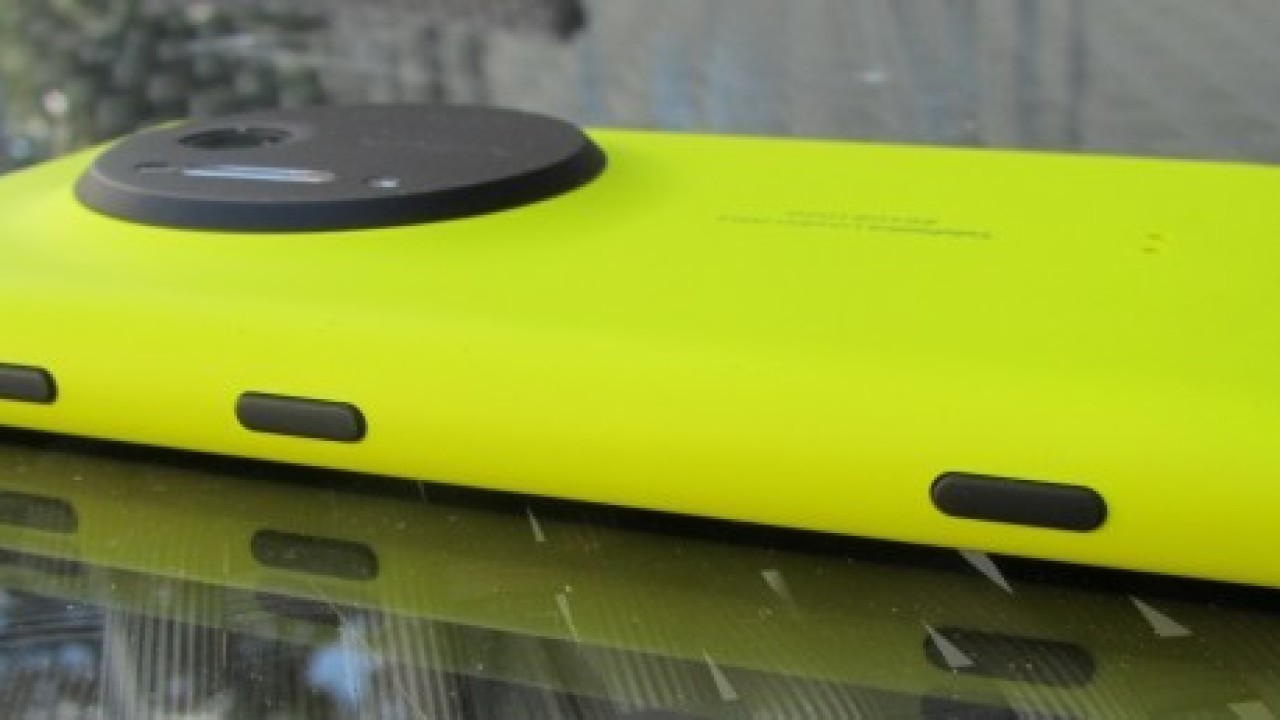 The Nokia Lumia 1020, Nokia’s newest flagship handset, makes no secret about where its intentions lie. It wants to be your only camera.

With a 41-megapixel sensor, there’s nothing much else on the market that comes close in terms of sheer megapixels, but as we all know megapixels alone do not a good photograph make. Well, not necessarily anyway.

Priced at around £550 on pay-as-you-go, let’s not forget that the primary function for the Lumia 1020 is as a phone, even if the handset itself might seem to forget that from time to time.

In the box along with the device was a set of in-ear headphones, a tool for opening the SIM slot and the usual charging cables. We were also provided with a Nokia Camera Grip accessory which clips on over the phone to make it easier to hold when taking photos – it also has an integrated battery that charges the phone as you go and the option of connecting a tripod.

Do you have it in anything other than yellow?

The model we received was canary yellow, that’s not what Nokia calls it, but it should. And so was the Camera Grip accessory that arrived alongside it. A pair of canaries, if you will.

Like other members of the Lumia range it keeps to the tried and tested look, shape and feel of the polycarbonate shells found on most other Lumias, like the 920 and 820. More so, in fact, than the former flagship handset, the Lumia 925 which sported some aluminium banding and a slimmer profile.

Official measurements pit the Lumia 1020’s dimensions as 130.4 x 71.4 x 10.4mm, making it nearly a full 2mm thicker than the 925 and nearly 3mm thicker than the iPhone 5s. Add on the Camera Grip and it becomes a whopping 27mm thick, but then, you really wouldn’t want to walk around with it in your pocket while it’s docked in the Grip.

It’s also pretty hard to ignore that the phone, thanks to that impressive camera, won’t sit flat on a table if you put it on its back, which means making the choice between resting it on its protruding lens or the 4.5″ AMOLED WXGA (1280×768 pixels) display. Neither of which feels like a good choice really.

What’s interesting though is that despite its slightly uneasy shape and not inconsiderable dimensions, it actually doesn’t weigh as much as I’d expect – officially 158 grams, but nothing that left me feeling like it was overly heavy or would weigh me down when in a pocket.

As noted already, the screen doesn’t match the full 1080p resolution of some of the other devices on the market but it does offer a 720p standard. Despite not going the whole hog and fitting a 1080p display, the Lumia 1020 doesn’t leave you feeling frustrated at fuzzy imagery or colors – it’s mostly all bright and crisp, thanks in part to the Windows OS.

And thankfully, yes, it does come in colors other than yellow – though your choices are white or black.

As with all members of the Lumia family, the 1020 runs Windows Phone (8) under the bonnet.

This means that Microsoft’s resizable Live tiles interface will greet you when you first switch on the phone after setting it up, and whether this is a good thing or not is down to personal preference really.

I find they do a good job of keeping me updated on a few little bits of information without the need for any interaction. It’s also better than a sea of static icons, and in some peoples’ opinion, better than page after page of horizontally scrolling home screens filled with widgets that do a similar (albeit more fully-featured) job as you’ll find on Android.

All the apps that you don’t want on your home screen can be found by swiping right, which reveals the full list of apps.

Overall the Windows Phone OS has come on in leaps and bounds since its first incarnation and is serving as a good platform for people making the jump from feature phones to fully fledged smartphones.

What really helps the Lumia series in particular is that it comes with Nokia-specific apps like its Here Maps and Here Drive+, both of which I find to be really quite good.  I also particularly like the fact that the back button will always step you back through the last actions you took, whatever that was. Other operating systems and handsets often use back buttons that only step back within whichever app you have open.

However, while the simplicity and ease of use is a strength (automatic uploading to SkyDrive of photos out of the box is pretty handy, particularly for the less tech savvy), it leaves people who want more out of smartphone feeling a bit wanting. There’s precious little tinkering to be done with Windows Phone OS.

Where Windows Phone truly falls down on the Lumia 1020 is the same place it does on each and every other Windows Phone handset – the app selection. It’s growing pretty quickly and there’s now a decent choice of big name apps, but more often than not if you’re swapping from another smartphone there’s a good chance the apps you use won’t be present.

More than that though, it’s a problem that will take a little more time to rectify. Sure, more and more apps are being ported across to support Windows Phone, but how many do you hear of launching first on the platform? Almost none.

As I mentioned though, Windows Phone handsets seem to appeal to people that don’t have a history with smartphones, and for these users this is less of a problem.

Clearly, the key selling point about this phone is the 41-megapixel camera. Slightly alarmingly, Nokia has deemed it necessary to warn Lumia 1020 buyers that if they hear the phone rattling, it’s actually just the “sound of blur-free photos and super-stable videos”; this is because the cameras optics are rolling on little ball bearings to make the images more stable.

It really works too. Holding the shutter button half down to focus, if you then physically shake the phone around while you take a picture, more often than not it will come out as a reasonably sharp and in-focus image which is really quite incredible and far beyond the performance of anything else I’ve seen in similar conditions on any other camera phone. And that’s obviously not how most photographs are taken.

The statement ‘better than anything I’ve seen on most other camera phones’ is one that applies to pretty much every part of the Lumia 1020’s camera capabilities.

There are three shooting modes – the standard camera, Smart Lens and Pro Mode.

The standard mode operates as you’d expect – simply point and shoot. Smart Lens, seen on a few other Lumia devices released since the 920, provides options for things like motion blur, action shots and simply choosing the best image by taking a burst mode of 10 images in quick succession.

The Pro camera mode, however, is where the fine tuning options come into play.

Shooting an image in this mode provides you with quick access to options overlaid on-screen for controlling things like shutter speed, ISO level, white balance, flash and that sort of thing.

Adjusting the sliders before taking a shot provides you with a preview of the change to the image – something that many DSLRs don’t offer.

Like many smartphones, the Lumia 1020 excels in bright weather but unlike many of its rivals, its low-light performance is also uniformly pretty outstanding in most instances.

That said, for all the options on board, I found myself using the defaults more often than not. Perhaps a more keen amateur photographer would delve into the manual mode more frequently,and the point is, if they wished to, the options are there.

What’s more handy are the post-shooting options, like the ability to reframe a photo after the fact and make other little tweaks – in some cases this requires using Nokia’s Smart Lens app to take the original picture.

The camera grip accessory, priced at around $59, provides an easier way to grab onto the smartphone when using it out snapping. In addition to making it a bit easier to hold, it also provides a slightly larger dedicated shutter button (although the handset on its own also has one) and doubles as a battery pack, charging your phone as you go.

While it’s definitely handy to have – particularly for its charging capabilities – it does make the device look and feel a bit toy-like, or a bit like an underwater camera, which is ironic really as it doesn’t sport the same waterproof credentials as some rivals, like the Sony Xperia Z1.

More than the weight or general size of the camera grip though, is docking the phone into it and removing it that concerned me. To pop it in you just slide it down into the casing, but to remove it again you have to pry at the corners of the plastic and just pull – quite hard. While it leaves you in no doubt that the phone can fall out – it’s a very snug fit indeed – it does leave you wondering if you’re about to snap your $59 accessory.

As well as playing around with the camera, I also used the phone, as…well, a phone for a while too. Call quality seemed decent (if a touch quiet) and in a wholly unscientific test, it seemed to get signal and hold it steady in some areas where my other handsets struggle. Obviously though, this can be dependent on a range of factors.

I’m still not much of a fan of the predictive text or keyboard on Windows Phone devices, and the long-press to drop the cursor somewhere specific still feels a little hit-and-miss to me. That said, again, it’s largely personal preference – there’s nothing functionally wrong with the keyboard.

The model I received also had 64GB of internal storage (exclusive to O2 in the UK) rather than the usual 16GB or 32GB options, meaning it could store twice as many images as the smaller version – around 3,000 or so.

The Lumia 1020, as has been said by many other people, is easily one of the best camera phones on the market, if not the best. Be in no doubt, if you’re buying a phone on its camera capabilities above all else – including convenience and app selection – then the Lumia 1020 will likely make you happy indeed.

However, that said, it’s not a perfect camera or a perfect phone. The word I’d use to describe the unit I received is ‘fun’. It’s bright yellow, has Live Tiles that update and spin around and has more camera features and post-edit options than you can shake a stick at – it certainly does have something fun about it.

Unfortunately, as in lots of life, fun comes at the expense of practicality and convenience (from a phone perspective, anyway) due to its chunky chassis. It’s always going to be noticeable when you have it in your pocket. While the yellow will appeal to some buyers, it left me feeling a bit like the phone felt like a toy, again, something associated with fun but not something that will appeal to people who want a more understated experience.

“They could get a black one, or a white one”, I hear you say. Well, yes, but that wouldn’t make it any more svelte – it’s not just the color that makes it feel like a less serious device than something like the HTC One or an iPhone.

I’d happily carry a Lumia 1020 with me in my bag everywhere I go, just in case I needed a decent camera – but as my day-to-day smartphone, for someone who knows what a smartphone can do, it’s just a little too restrictive, both in terms of options and apps -which is a shame because it truly is the best camera you’ll find on a phone today.