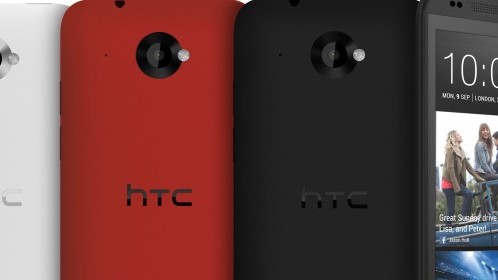 HTC has announced two new devices for its Desire range in the form of the Desire 601 and the Desire 300 and added a new blue color option for its One and One Mini handsets.

While the announcement of the Android-powered mid-range Desire 601 is less of a surprise thanks to recent leaks, the entry-level Desire 300 managed to creep up on us in an altogether more stealthy manner, and in some ways is the more interesting of the two.

Nonetheless, we managed to get some hands-on time with the HTC Desire 601 ahead of the announcement, so let’s start with that one.

The Desire 601 is a mid-range device in a mid-premium range, which goes some way towards setting expectations lower than normal for a multi-handset launch. However, on this occasion and judging from only a brief hands-on, the Desire 601 could be one to buck the trend of middling mediocrity for anything other than ‘hero’ handsets.

For starters, it has the same dual front-facing speakers (which means it should work with the freshly announced BoomBass speaker accessory) as you’ll find on the more expensive members of the One series and HTC hasn’t skimped on the rest of the hardware either.

The microSD slot is accessed by removing the rear cover of the device, and what’s particularly good is that the battery is also removable. This was a point that irked me on the Nokia Lumia 625 (a handset the 601 will likely be up against, depending on its final price); the rear cover was removable, but the battery was fixed in place. It’s a small point, but some people do appreciate having access.

Also on the rear of the device, you’ll find a 5-megapixel camera with HTC’s Zoe mode for taking short clips. Again, it’s a small inclusion, but features such as this BlinkFeed and Video Highlights do help non-hero devices stand out from the competition, providing you like that sort of thing.

Another thing that should definitely help it compete is 4G LTE capability, which along with only a few other handsets (like the Lumia 625), doesn’t tend to exist yet at this level.

One thing that does tend to get compromised upon at this level, however, is the display, and the same is true of the 601’s 4.5-inch qHD (960 x 540 pixels) affair. That said, I far preferred it to that of the Lumia, and it didn’t look anywhere near as fuzzy, helped in part by being a little bit smaller, I suspect.

HTC has a frustrating habit of giving little in the way of indicative pricing for any of its products. The 601 is described as “mid-range” and it’s a Desire, rather than a One, which suggests it isn’t quite as expensive, but that doesn’t guarantee it’ll be in any way cheap either. For now, it remains a solidly specced mid-range device that brings a touch of the high-end down a bit lower, but at a price we don’t yet know.

The phone will be available in black, white and red and will start shipping to some countries in the EMEA region “from September”, other markets are yet to be announced.

Described by HTC as an entry-level device, this is another we don’t know the price of just yet. And while we did get a ‘hands-on’ with it, the unit was a non-functioning pre-production model, so we wouldn’t really call it a hands-on.

Like the 601, the Desire 300 is aiming to bring some of the functionality of more expensive devices to a more affordable price point.

Key specs include a 4.3-inch display, Snapdragon dual-core 1GHz processor, 5-megapixel camera and 4GB of storage. If that’s not enough, you can slot in a microSD card up to 64GB.

While it doesn’t include other luxuries like 4G or camera-specific features like HTC Zoe or Video Highlights, those hardware specs are pretty impressive for an entry-level phone. It does manage to bring HTC’s BlinkFeed UI and Sense 5 to the handset, but how smoothly it all runs is unknown at this point.

Available in black or white, the Desire 300 will be available at an unknown price in “select markets” from October.

In addition to rolling out new devices and new accessories, HTC also took the opportunity to formally introduce the much-leaked blue HTC One and One Mini.

The two “Vivid Blue” devices are set to start rolling out sometime in Q4 this year.