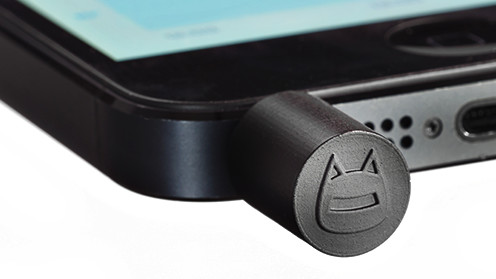 While we loved the studio’s original Thermo app from the moment we laid eyes on it, Robocat says that it got a few one-star reviews because some users expected it to actually measure indoor temperatures. The feedback got the company thinking that maybe it could create an attachment that could do just that.

Robocat has already built working prototypes of Thermodo, so it’s raising money for help with production. It has set a goal of bringing in $35,000 over the next 30 days. Early bird backers can receive a Thermodo as a reward for pledges as small as $19.

The sensor will come in black and white, though a premium anodized aluminum version will be available to backers. Keep in mind, this isn’t meant for measuring body or fluid temperatures. The range of the device is -20 °C to +50 °C (-5 ºF to 120 ºF).

Thermodo comes with a cap and a keyring and plugs in to the headphone jack on iPhones, iPads and Android devices. The device will have a custom companion app, and it will also work with Thermo and Haze. The studio plans to release an SDK for other developers looking to integrate with Thermodo.

Robocat expects to do a full production run in July and begin shipping the thermometers in August. The release of version 1.0 of the companion app and SDK are also scheduled for August.

The studio lists App Store approval, quality control and electrical testing as risks and challenges for the project. Changes to the app, for example, could result in delays due to Apple’s policies. Robocat also says any quality issues with the initial units could push back the release date. The company also notes that it’s prepared to test 1,500 units in-house before shipping, but it will

We’ve already got incredibly powerful computers in our pockets, and accessories like the Thermodo have the potential to make them even more useful. While the majority of users will probably just rely on weather services and apps, I suspect there’s enough of a market to get this accessory off the ground.