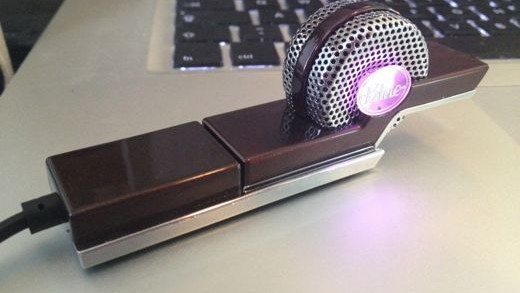 It was only a few days ago that we told you about Blue’s Tiki USB microphone finally coming to the market. After seeing the device at CES in January, it seemed as if we’d be waiting forever for it to land in our hands. But FedEx delivered our review unit today, so it’s time to dig in and see if the Tiki can live up to its claims.

First off, let’s go over what the Tiki aims to do. It’s a dual-microphone system, enclosed in what looks a lot like a USB key. So yes, it’s infinitely portable. It operates in two modes — Intelligent Speech, for Skype calls, chats and noisy environments, and Natural Recording for podcasts, quieter areas or recording instruments.

Intelligent Speech mode finds where you are in relation to the microphone, and then uses the mic in the rear to pick up ambient sounds and block them out. You’re left with clear vocal audio, but it will sound rather processed as the digital signal processing does its work to block background noise.

Now noise cancellation and portable microphones aren’t anything new. But in the past cancellation has lead to incredibly garbled sound, and portability usually leaves you with a mic that you wouldn’t want to use for anything of measure. Fortunately Blue has taken its time with the Tiki, and managed to overcome both of these problems:

As you can hear in the video, the Intelligent Speech mode does an admirable job of negating background noises, and that automatic mute function is stellar. In past microphones that I’ve reviewed with the function, it has required quite the loud sound to trigger its release from a muted state, or they’ve tended to want to mute far too easily. The Tiki exhibits neither of these issues.

When I travel, I typically do so with a Blue Snowball. It’s about the most portable microphone that gives passable audio quality. But with the Natural Recording mode on the Tiki, I’m quite happy to give it a try as my go-to travel device. While the carrying case is probably a bit large to stick into your laptop bag, it’s fine for a suitcase. But Blue’s microphones tend to be built like a tank so, while they’ll never suggest doing this, I’m telling you that you’ll likely be fine to just stick the unprotected Tiki into your bag.

As with any gadget, whether or not you’ll want to buy it depends a lot on whether you’ll use it. For me, I need the ability to do great-quality voice recording when I’m traveling. I also do a lot of Skype chats from places like airports, conference floors and the like. So it’s a no-brainer decision to spend $60 to make certain that both of these sound as good as they can.

The Tiki is available from Best Buy right now, and it’s coming to Apple Stores as well as many other outlets within the next few weeks.