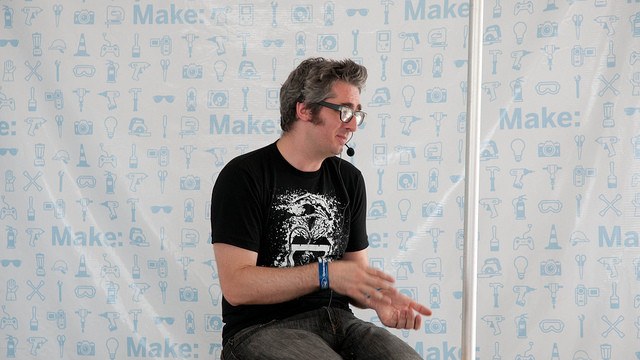 When we think of CES, we think of big companies like Sony, Microsoft, Samsung, and Google. One small company out of New York City wants to change all of that with its latest product that will debut on the CES floor tomorrow.

MakerBot, the company out of NYC led by geek and world-renowned tinkerer Bre Pettis, will be showing off a new 3D printer called “The MakerBot Replicator”. The company has been making huge waves since 2009, with the hopes of making 3D printing a mainstream occurence.

Before the company launched, Bre Pettis asked me how cool it would be if you could simply print out a set of forks if you ran out of them. No need to run to the store, just download an open-source plan and print it out on a machine. I replied “Sounds cool”, thinking we were nowhere near that day. Well we are, and the latest product from MakerBot gets the company that much closer to the dream of going mainstream.

The company announced the product on its blog today, and it is now available for pre-order:

How much will this thing set you back? The base unit costs $1,749 and aesthetically has come a long way from previous models. The items that it can now make have gone from cupcake-size in 2009, to the size of a loaf of bread in 2012.

Here’s MakerBot CEO Bre Pettis, who I can only describe as the next geneartion Mr. Wizard, discussing all of the things that can be possible with one of his 3D printing machines:

If you’re on the floor at CES, this is a demo that you simply can’t miss. Sure, it’s not a TV, but if you daydream about how cool it could be to print out forks or say, a chess set, you can see it all happen up close and personal. I believe that 3D printing has a bright future, and MakerBot has set itself up squarely in the center of the industry.

Be sure to read all of our CES coverage here.