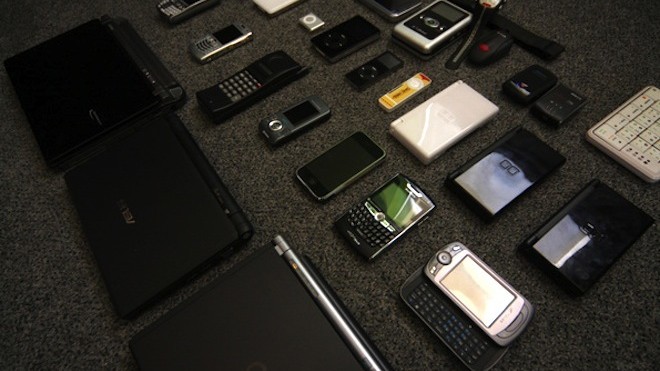 While I’m not a huge fan of the word “disruptive” when used to describe a product, but sometimes it’s the only word that’s truly fitting. When you look at things that are considered the social norm, then you flip that norm out of the way to move forward, that’s disruptive.

It’s with this in mind that I’ve gone on a bit of a memory dig to come up with the most disruptive gadgets of the past decade. These past 10 years have been some of the most formative in the entire history of gadgets, with the portability era coming full swing.

So, without further adieu, here’s my list of the game-changers of the past decade and a bit of explanation about each of them.

Oh sure, we had portable music players before 2001, but there’s a pretty good chance that you didn’t buy one. The iPod was, simply put, the first one that made file-based, portable music a reality for many of us. But it went beyond that, with the release of iTunes. The interoperability of the two, how they were tied together, made each of their success completely dependent upon the other.

If anyone else had done a move like this, they’d have been laughed at. Apple took this crazy idea and it sparked the beginning of the company’s resurgence within the industry. Further than that, however, it moved Apple away from being a computer manufacturer and made it a purveyor of lifestyle goods. Why yes, you could browse Internet content previous to commercially-available 3G, but you were probably doing so via a WAP browser or something that looked equally as terrible. To face facts, the pre-3G speed days were terrible at best.

With the launch of the first commercial networks and devices in 2002, the world of mobile broadband was about to see its true beginnings. While it could be argued that EV-DO wasn’t really viable until Revision A (which brought it to a 2-3 Mbit speed range), getting web pages in less than minutes was a marked moment in wireless history.

While GPS has been around for ages, and it’s been done by numerous companies, Amsterdam’s TomTom was the first company to really bring it around to the consumer. 2002’s release of the TomTom navigator for Windows CE PDA’s was a market-changer.

It was bundled with a car cradle and a receiver, the latter of which is not needed for more modern systems today,  TomTom didn’t release a standalone consumer product until 2004 with the TomTom Go, but it was the success of the Navigator that made Go a hit.

This will probably anger some people, but let me explain why I’m voting for the 650. Yes, there were earlier PDA phones. Some of them were even pretty good. But the Treo 650 did a few things that were very important to the overall landscape at the time.

It was the first time that you could really feel that you were able to work on a phone. Many of the ones before it were limited by storage, screen resolution or battery life. The Treo 650 didn’t seem to suffer from any of these. This was also the beginning of where we saw apps for a phone really take shape; a factor that would be immensely important to the later success of the iPhone.

Yes, we had the Game Boy. We also had the Sega Game Gear, Neo Geo Advance and Game Boy Advance. But honestly, none of these came close to the gaming experience that you could get on the Nintendo DS. Interestingly, none of the rest of Nintendo’s handheld ventures have proven to be quite as successful after the DS. But that doesn’t mean that it wasn’t a market-shaker.

If anything, it opened the door to having enjoyable games in a mobile format that actually looked good. Previous to the DS, most of the offerings were low-resolution color or even monochromatic. The DS showed the market that we really did want to play arcade-style offerings while we were on the go.

Oh, we also had the Nokia N-Gage but I’ll spare you the gory details.

Along the way we saw capacities get bigger, storage formats change slightly and more options come into play but the main thing remained the main thing – you could stick a flip cam in your pocket and shoot a reasonable-quality video in an instant. It wasn’t until the iPhone came along that the Flip-style cameras really felt any sort of competition in the market. Whether you like it today or not, there’s no denying that the iPhone was a game-changer in mobile devices. In fact, it changed much of the mobile industry as a whole. By taking on the same idea as Apple had with iTunes, it created an entire ecosystem wherein applications on a mobile phone went from being a novelty to being expected.

The iPhone was also the predominant starting point in the death of portable video cameras. While there are still many made, the desire for the devices has waned considerably since most of us can now shoot high definition video on our smartphones.

When you take a company that got its start by being a great place to buy books, then you create a new way for people to buy them, you’re probably headed toward success. While the Kindle was far from being the first e-reader on the market, it was arguably light years ahead of the competition when it was released in 2007.

Though we can look back on the device as being flawed by today’s standards, Amazon’s bundled 3G with no contract, newspaper subscriptions and ubiquity of its Kindle app platform rocketed the device to instant stardom and nobody else has really caught up just yet.

I remember watching Minority Report in 2002 and thinking that I couldn’t wait to do full gesture control of a UI and applications. 7 years later, we have the first human-as-a-controller product that is ready for prime time in Microsoft’s Kinect for the Xbox 360.

It could be said that the Wii with its Wiimote and the PlayStation Move were precursors to the Kinect, and rightly so. But neither of these worked in the same fashion and they still required you to hold things in your hand in order for your motion to be tracked. For something that’s truly disruptive to happen, we needed the Kinect.

While the games themselves are fun, they’re not the most important part. Microsoft’s willingness to open Kinect to the homebrew community is huge. Seeing what crafty people will do with the technology is one of the most exciting things I’ve witnessed in years. Apple’s third and final entry to this rundown will also close out my list. The iPad was laughed at. It was seen as a gigantic iPod touch and it was jeered by critics worldwide. And then it sold out. Then it sold out again and again and again. Come to find out, people were finding all sorts of creative uses for this tablet computer and the market has positively exploded with also rans.

The iPad was the introduction of many things, even if very few of them have yet seen their full potential. It was the first time that we’ve had viable touch computing, it shook up the e-reader market, stealing share from those who wanted to carry a device that could do more and it is now to the point where people don’t often say “tablet” or “slate” but rather they say iPad. Just like Jell-O and Kleenex, when your brand name becomes the identifier of a product, that’s huge.

So there you have it. These are the game-changers. The disruptors if you will. Everything in this list was either shaking up the industry in which it was introduced, or it was a catalyst toward where we are today. Have your own? We’d love to hear about them in the comments.