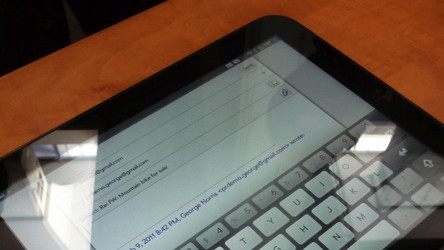 After a temporary $100 reduction in price via an in-store coupon at Staples this weekend, HP has made the price drop official by dropping the TouchPad to  $399 for the 16GB version and $499 for the 32GB version, according to a letter from HPs SVP of Personal Systems Steven DiFranco published by WebOS Roundup. This move isn’t that surprising, considering that reviews of the tablet haven’t been incredibly positive so far.

Interestingly, customers that purchased the TouchPad before this reduction will only get a $50 credit for apps in the App Catalog for their early adoption and not a full $100 credit. DiFranco also calls attention to the update for WebOS 3.0 that rolled out to TouchPad users last week. He states that this is the first of a “steady stream of improvements” to the TouchPad’s OS.

DiFranco also comments briefly on HP’s search for the next Americas Channel Chief for HP, saying “I appreciate the input many of you have provided to date and can report that we have a solid list of candidates that we’re currently exploring.  I hope to make a decision fairly soon.”

The position has been vacant since DiFranco’s promotion to Senior Vice President of Personal Systems.

The TouchPad has been met with mixed reviews, with many declaring its use of multitasking cards to switch between apps to be one of the best implementations around, but declaring the OS too slow and too limited to recommend yet. As with most tablet and mobile OS launches there is also a dearth of apps available for WebOS.