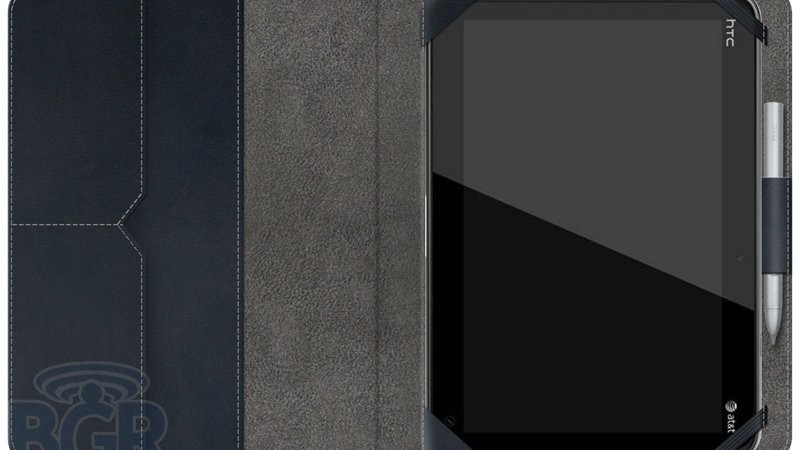 There have been rumblings of a 10-inch tablet coming from HTC for a while now, but Boy Genius has uncovered some images of the device and it actually looks pretty slick. The device is rumored to have a 1.5GHz processor and come in a 4G LTE flavor for AT&T’s network. Currently it’s known by its codename, ‘Puccini’.

The images reveal an 8MP camera and an LED flash, as well as rear-facing speakers and what appears to be a large microphone. The front features no hardware buttons and a single camera, possibly for video chat.  Interestingly, the images show a suede case of some sort which appears to be an official offering, and tucked inside the case is a stylus of all things. Lets hope the stylus is very, very optional as any tablet that requires one for any core functions is missing the point a bit.

HTC’s previous premium Android tablet, the Flyer, also features this stylus accessory and hasn’t exactly taken the market by storm.  Our own Brad McCarty had a bit of a hands-on with the 7″ HTC EVO 4G View and said that the stylus seemed to work ok, so maybe they’re on to something. It’s different anyway. The Puccini will also apparently coat its interface in the Sense UI that permeates HTC’s lineup.

I like the looks of the Puccini so far, but it’s really the performance and the execution of Sense that will set this tablet apart from competitors like the Samsung Galaxy Tab 10.1, which is coming in a 4G LTE model soon, and the Motorola Xoom. While those tablets have met with some mild success, neither has managed to break out as a runaway sales hit. Do you think that an offering from HTC with heavy Sense customizations will interest those looking for an Android tablet any more than those models?