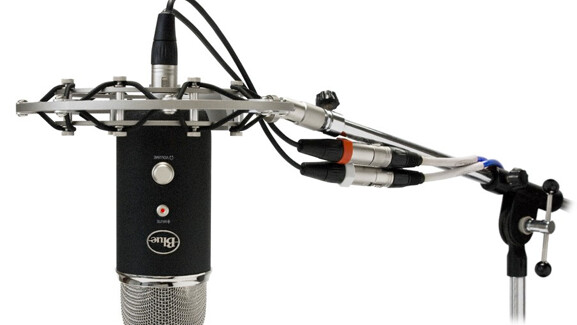 I’ve wrestled with this review for quite a while now. You see, it’s not that Blue’s Yeti Pro is anything less than stellar — it’s one of the best USB microphones I’ve ever used. The problem is more akin to whether or not you (being you in general, dear TNW reader) will actually need or want to drop the extra $100 required to buy this microphone over the original Yeti.

But let’s talk about what you’ll get for your money. After all, that’s important. The first thing that you’ll notice is that the Yeti Pro has a sexy black finish, in opposition to its silver-hewn counterpart. The second thing that you’ll find, if you tip the mic over, is that there is a 5-pin XLR connector on the bottom as well as the traditional mini-USB. That connector is special and we’ll talk about that in a minute.

Now, plugging in the Yeti Pro (Mac users, just plug it in. On Windows you’ll probably need to download some drivers from Blue), you’ll probably notice that it appears as a full USB audio device, rather than just a USB microphone. This is important. This means that you’ll now be able to monitor full playback via the headphone jack on the bottom of the mic, of course with zero latency.

The Yeti Pro is also capable of exponentially higher bitrate recordings than the original Yeti. You can crank that sample rate all the way up to 192 kHz, instead of 48 kHz like the original Yeti. If you’re not familiar with what all of these numbers mean, essentially it comes down to recording more accurate sounds, at the cost of producing huge files while doing so.

Let’s go back to that 5-pin XLR on the bottom. It’s an analog output for the stereo microphone, thus why it has 5 pins instead of 3 like a standard XLR. When you’re recording in the stereo function of the microphone, you’ll have your left and right sounds split accordingly. When recording in any other function, the same signal will be duplicated to both sides of the output.

Now here’s where things get tricky. I’d love to never have to plug and unplug cables, but that doesn’t happen very often when you go mixing the worlds of analog and digital. When the Yeti Pro is hooked up via USB, it won’t work over your analog connection. In fact, you’ll need to unplug it.

The gain control on the back of the Yeti is a digital control. That means that it won’t do anything as you hope it might when it comes to input volume. In fact, the directions for the microphone tell you to turn that knob down completely before trying to record an analog signal. It’s not a perfect solution, but it works.

The rest of the Yeti Pro works just about like the Yeti (my Blue Mic roundup, with the Yeti, is here). It’s still a 3-capsule array under that pretty silver head, it still records some of the most beautiful sound that you’ve ever heard out of a USB mic, but now it can do it more accurately. It’s still a beast of a microphone, standing a touch over 12 inches tall in its included base and it has now taken the throne from the original Yeti as the single best USB microphone I’ve ever used.

But caveat emptor. There are things that I don’t love about the Yeti Pro. Since I record voice mainly, I’m a bit annoyed by the fact that the output volume of the Yeti Pro is a fair bit lower than the original Yeti. This is intended, and by design, mind you. It’s just something that bugs me a touch. In short, the microphone is designed to record higher sound volumes, so that reduced output is in place in order to provide some overhead where you can work more effectively.

I would also really appreciate it if Blue had done a Digital/Analog selection switch. This would allow me to flip the microphone over from USB to the XLR output without having to detach/attach cables. This annoyance is likely to be a bit more widespread because, let’s face it, if you’re buying a microphone like this then you probably have a good reason to want to use both connectors.

Long story short, the Yeti Pro is a solid upgrade for you if you do more than just record some voice into a computer. If you need the versatility of a true dual-system microphone, it’s unsurpassed. For true-to-life recording, you won’t find a better USB microphone on the market. If you’re already a Yeti owner you might not need the upgrade. If you’re not, then it’s well worth a few bucks to see what having fewer limits will inspire you to do.

Oh! Blue has also just released its Radius and Ringer isolation mounts. We’ll take a look at them in the near future here on TNW Gadgets, but for the time being you can check them out (and buy them) directly via Blue’s new online store.