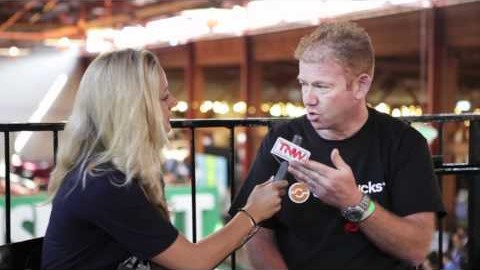 Though Flip products are still available, Cisco in its wisdom has decided that the Flip portfolio is now no longer core to its business and is shuttting the Flip arm of its company down. Flip products are still available to purchase until stock runs out (which also means there are bargains to be had) and UK customers will still receive 12 months warranty and can purchase support (for a “reasonable” cost – Cisco’s words) if the warranty expires.

Despite Cisco’s announcement, we got our hands on a Flip Action Tripod and Ultra HD. It’s a versatile camera tripod that is meant to allow for mounting Flip (or other) cameras to objects such as a bike or railings, but it also has little extending legs so it can be used as a normal tripod to sit on a flat surface.

The base or the tripod is grooved so it can fit against a tube and is attached with velcro straps that wrap around the mount and whatever it’s being attached to. That looks effective, but only fits snugly on certain sized tubes and tends to wobble if there is lot of vibration. Also, mounting the tripod and camera on the handle bars of a bike meant the camera kept falling back.

For testing, the tripod was mounted on the centre handlebar tube coming up from the frame, which ensured a reasonably stable mount. Despite this the camera tilted backwards as a result of wind resistance and it had to be pushed forward every now and again.

The tripod could do with a rubber insert in the base which would compress against the mount as the straps aren’t secure enough. It should be replaced with a plastic (or similar type) grip that can be tightened and will not slip.

The camera itself is point-and-shoot style. It has a big red button that turns on recording (the Ultra can record up to 2 hours of 720p at 50fps on its internal 8GB of memory) and the up down buttons work as a zoom in/out during recording. The left and right buttons skip whilst paused in playback or fast-forward and rewind while playing a video.

The 8GB unit holds 3 AAA batteries or a rechargable lithium battery, whilst the slightly bigger 4GB camera takes 2 AA batteries. There’s also a Flip port on the 8GB unit, which is not present on the 4GB model. There’s a play button and a delete button and of course the USB arm so that the UltraHD can be connected to a PC or Mac (the camera comes with FlipShare software in its memory, though newer versions can be download the the Flip website).

The camera produces great quality video and image stabilisation works to a degree, although it doesn’t appear to be designed to be stuck on a bicycle on busy and bumpy London roads. The USB connection allows for easy connection to any PC or Mac to transfer files. Transfers can be a slow, mainly because HD video takes up a lot of space (about 4GB per hour), so working with small clips is preferrable to very long shots.