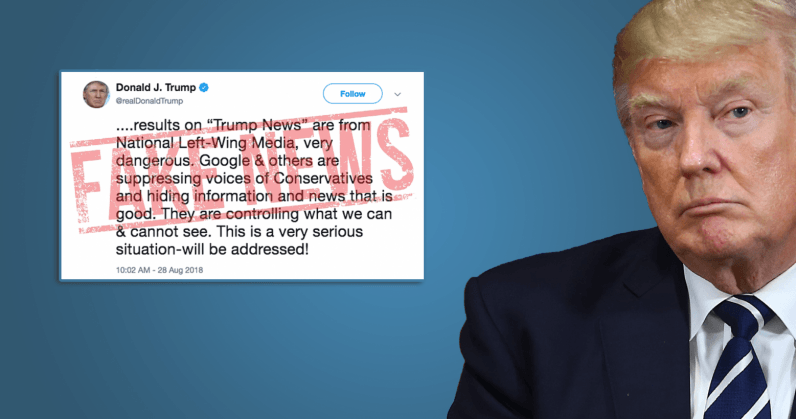 In two tweets early Tuesday morning, President Trump reignited the debate about censorship on America’s most popular tech platforms. Citing dubious research, he claimed that Google was censoring search results in an effort to smear the Trump administration.

Google, for its part, denies any culpability. A spokesperson told The Washington Post:

When users type queries into the Google Search bar, our goal is to make sure they receive the most relevant answers in a matter of seconds. Search is not used to set a political agenda and we don’t bias our reports toward any political ideology.

For a company that profits by placing ads on relevant search results, partisan bickering doesn’t offer much benefit for Google. Nor does altering its search results to silence conservative media.  It’s worth taking the company at its word on this one.

How we got here

The controversy started with Paula Bolyard, a writer at the conservative blog, PJ Media. In an exhaustive search of the top 100 stories in Google News for the keyword “Trump,” she found conservative outlets to be notably absent from the results. “National Review, The Weekly Standard, Breitbart News, The Blaze, The Daily Wire” and many others were nowhere to be found, according to Bolyard. Instead, sites leaning left, like “CNN, The Washington Post, NBC, The Altantic, Politico, and The New York Times” dominated the search results.

She started with an image originally created by conservative media personality Sharyl Attkisson.

The image itself — a simplified version of Vanessa Otero’s media bias chart — attempts to categorize popular publications based on their level of bias. The center contains the least biased outlets, while the fringes play host to those that lean furthest left or right.

Its accuracy is questionable, at best.

The New York Times, for example, appears to be a fringe left site, a publication that leans further left than InfoWars, or The Daily Caller, does right. Odd placement considering the latter’s ties to the alt-right and notable white nationalists like Jason Kessler and Peter Breimelow. The Times actually leans as far left as Breitbart does right. Breitbart, since its inception, has lost more than 2,500 advertisers due to false and inflammatory headlines, anti-semitism, sexism, hate speech, and calls for violence. To put it lightly, if The Economist is the institution by which all other right-leaning publications are measured, Breitbart is the dumpster outside.

These are the figures Trump cited in his tweets when claiming 96 percent of Google results favor left-leaning publications. It’s research that Trump undoubtedly saw when Fox personality Lou Dobbs picked up the story.

Google is biased, but not like you’d think. Any bias doesn’t come from engineers or C-level executives, but from the people who use it most often. It’s these people that train the algorithms to return relevant results, based on hundreds, perhaps thousands, of ranking signals. Things like domain age, keyword usage, social media shares, time spent on site, and user behavior after clicking a search link are what Google uses to surface relevant results, or push bad ones down in the rankings.

Relevance does not necessarily equal quality, although it typically does. This is a factor Bolyard overlooked in completing her research.

Take The New York Times. The Times has won 125 Pulitzer Prizes, the top award in journalism. This places the publication light-years above any competitor. The Washington Post, another of Trump‘s least favorite outlets, has 51. None of the conservative sites Bolyard listed come close.

None, in fact, have ever won a Pulitzer.

In fairness, Fox is perhaps the most legitimate right-leaning site Bolyard mentioned, and it deals mainly in broadcast news. In the broadcast world, the Pulitzer equivalent is the Peabody Award. Fox has never won one. CNN, by comparison, has taken home eight of them since 2010.

History matters, as do traditional journalistic values. It’s not about political leaning, it’s about quality of work: original reporting, depth, and accuracy. These are billion-plus dollar organizations with thousands of reporters covering various beats. It’s not about ideology, it’s about quality. And Google’s rankings are a natural extension of the people using it: Those who demand this level of journalistic rigor.

Of the publications on Attkisson’s chart, only a handful on either side are known for consistently breaking verifiably true stories. On the right that’s Fox News, Forbes, The Wall Street Journal, and The Economist. The left has The Washington Post, The New York Times, The Associated Press, Reuters, BBC, Bloomberg, CNN, MSNBC, and half a dozen others. It’s an arms race, and one the right is losing.

What remains, on both the right and left, is a combination of curation, hot takes, opinion, and spin. These are the outlets that break their own stories, but not as often as those listed above. Instead, they’re often breaking down complex stories from elsewhere into more easily digestible bites, packaging multiple stories into more comprehensive explainers, and providing analysis, opinion, and spin on more moderate reporting.

This is worth mentioning because timeliness matters, and those who break stories are often rewarded most by Google — especially in Google News.

Conservatives in media are a minority. A 2014 study reports only seven percent of working journalists identify as right-leaning. What we’re seeing, essentially, is a team of unqualified bloggers and makeshift journalists asking to be met on equal footing with some of the best outlets and journalists in the world. Red State isn’t in any way equal to BBC. Breitbart has no place at the same table as The Washington Post. Rather than raging against the machine, conservatives would be better served graduating more right-leaning kids from journalism school.

That’s not to say that traditional media is infallible. When playing a game of incomplete information, nobody gets it right all the time.

The truth of the matter is that Google’s inherent bias is less about political ideology, and more about placing increased trust in media institutions, rather than relative newcomers. Vox and Salon, two sites that lean left, produce quality journalism that doesn’t fare well in Google’s top news results. Neither does Mother Jones, a left-leaning outlet that’s won more awards than most of the conservative outlets in Bolyard’s list, combined.

Bolyard seeks a comparison where one doesn’t exist. This isn’t a conspiracy, it’s a case study in quality journalism.

Read next: Leak: Here's our first look at the iPhone XS and Apple Watch Series 4