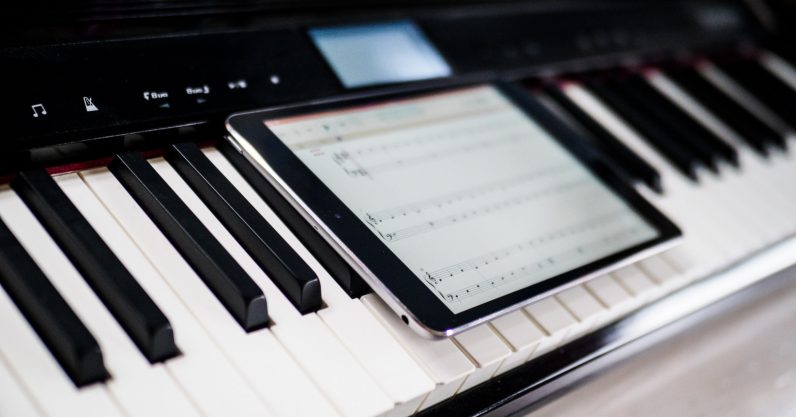 I’ve spent the past few months trying to teach myself the piano, pretty much from scratch. It’s been tough, and sometimes disheartening, but also hugely rewarding.

You might be wondering by now what an article about learning to play piano is doing on a tech blog. The answer is simple: I might not still be trying if it weren’t for technology.

Though I occasionally feel like I’m in way over my head starting out as a 27-year old, and traditional methods are still the core part of this musical journey, I’m lucky to live in a time where a wealth of resources are available to me at the click of a button.

This is intended to be the first part of a long-term series on learning the piano. It’s primarily a personal account, but I hope it might just help someone else starting out too.

This personal goal has been a long time coming. Although I have no formal background in music, I have a fair bit of informal background. Nearly half of the music I listen to is classical, and I go to live performances several times a year. I took a couple of music history courses in college, even though I couldn’t read music better than a 3rd grader, let alone play it. Everything I knew about the technical side of music until now came from occasional my Wikipedia-fueled curiousity.

To be totally honest, this technically isn’t my first go at learning the piano; I spent many an hour banging away at cheap keyboards when I was about 11. My parents bought me a second-hand beginner Casio, the kind with built-in games that teach you how to play.

Thanks to those piano games, I could play a mean Twinkle, Twinkle Little Star, and I learned about a rudimentary quarter of Fur Elise. I was very proud the latter fact because I share a birthday with Beethoven.

It wasn’t much, but I credit those cheesy MIDI tunes for sparking my initial interest in classical music. But then I stopped playing. My parents couldn’t afford a teacher, and I moved around too much for lessons to be viable anyway. In an era before smartphones, YouTube tutorials, ebooks, and modern access to information, trying to teach myself piano felt like a Herculean task I wasn’t quite up to.

16 years or so later, I decided I wanted to be more than a simple listener; I wanted actually understand the music I like so much. Perhaps even make my own.

First, I needed something to actually play on. I looked to internet communities for advice on picking a piano and starting off as a beginner; /r/piano on Reddit became a particularly valuable resource.

After an inordinate amount of research, I settled on Roland’s GO:Piano, a 61-Key instrument aimed at beginners that sells for around $329. It’s light and compact, has Bluetooth, can work with AA batteries, and the keys are the same width as a real piano. I liked Roland’s piano sounds better than anything else for its price, and the extra tones were neat too. I’m particularly fond of the Jazz Scat:

My only real annoyance is that the headphone port is on the back, which seems like an odd choice for a keyboard designed to help beginners practice.

It’s worth mentioning my choice somewhat went against the advice of many a piano forum member, who are quick to point you towards an 88-key unit with fully ‘weighted’ keys.

Most digital keyboards – including the Go:Piano – use springs to push keys up. Weighted keys try to replicalicate the complicated mechanism behind a grand piano’s keyboard action, for more responsive playing that translates better to an acoustic piano. Reddit has a great list of recommendations, but pretty much no new digital pianos below $400 have that feature.

Still, I chose the Roland for its portability and versatility, figuring I’d upgrade when necessary (more on this later). A small apartment means I needed something compact and easy to manuever. I usually stored the Go:Piano under my desk, and often played the keyboard on my lap if my desk had too many contraptions on it.

My first priority was getting something practical so I’d actually play consistently, and on that front. I think I made the right choice.

After some research on a good book, I settled on Faber’s Adult Piano Adventures.

That’s partly because because the Go:Piano came with a discount for it, but mostly because Faber was an established name that also happened to have a nifty iOS app (an Android version is reportedly in the works) and lesson videos. It was the right combination of traditional and new-fangled I was looking for.

To be clear, the bulk of my time was still spent with the book, which combines theory, technique, and lessons, but the app was a useful resource for the moments I got stuck – and all-around making the process more fun.

I connected the app to an iPad Mini via Bluetooth, although a wired connection works too. There are a few notable features:

When I was have trouble with a particular piece or passage in the book, I was able to turn to the app to help me figure out a tune and reinforce it section by section.

To supplement my piano playing, I bought an introductory book on Music Theory. There’s no particular reason I chose this book other than the fact it was one of very few I could find with an audiobook version on Audible. I do most of my reading through audiobooks nowadays, and it’s a huge time-saver to be to read something educational while doing menial activities.

Those things might seem like a small difference over sticking to a book, audio files, and a metronome, but it’s the convenience of Bluetooth and the app that helped make sure I was practicing nearly every day, and being able to switch things up kept it interesting. It’s because I can listen to an audiobook on my way to the gym that I’m learning even when I can’t pratice. I’ve been learning with an almost obsessive focus, and I’d almost certainly be a few units behind if it weren’t for the added convenience technology affords me.

But technology can be overwhelming too. In my first month or so, I tried to use every resource out there. I was watching tutorials on YouTube, reading a variety of music education sites, researching advice on forums, using learning apps and playing a few different piano “games”.

There’s an app called Synthesia, for instance, which is popular for helping you play piano in a Guitar Hero style. I realize a lot of people use it with results for learning individual songs, but I simply found it counterproductive for my more theory-oriented goals.

Which is why, as in all things, moderation is important. I eventually realized I was and am making consistent progress simply working through my two books, the Faber app, and a sightreading app; there’s no need to add superflous distractions if I’m already making progress.

If you’re interested in starting out yourself, I’d recommend you stick to a couple of established resources to not be overwhelmed by the wealth of content out there. That said, here are a few useful resources I found during my own practice beyond the ones I mention above:

Working in the tech media sometimes feels like technology is always out to make us depressed, ill, or dead. It’s good to remember that put to the right use, it can be fulfilling, too.

There are a few things I intend to do as I move forward. I’m moving on to a full-size, weighted keyboard to get my muscle memory working with something closer to a real piano. I’ll be getting an honest-to-goodness piano teacher within the next couple of months to make sure I’m developing good habits.

One of the great laments of being a post-college adult is not feeling like I’m simply learning something new. It’s great to have that feeling back. See you in a few months.