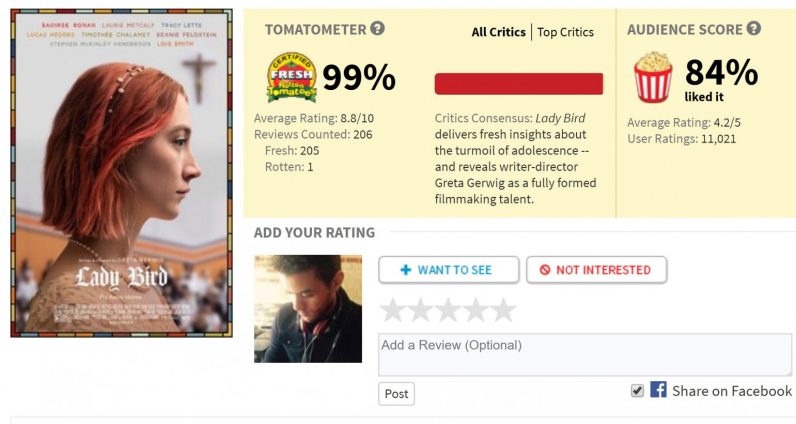 For about two weeks, ‘Lady Bird,’ a coming of age tale directed by Greta Gerwig, was the best-reviewed film ever on Rotten Tomatoes, sitting at a perfect 100 percent score after nearly 200 reviews. And then came Cole Smithey, a film critic known for his contrarian reviews, to give the movie its first ‘rotten’ score.

Let’s ignore for a moment the fact that he originally scored the movie a B-, which is a passing grade by pretty much any standard.  Let’s also ignore the fact Smithey calls himself “the smartest film critic in the world” on his website. Let’s even ignore his contrarian streak on popular, well reviewed movies. It’s fine to not agree with consensus – not everyone has to enjoy ‘Citizen Kane.’

Context is everything. I had to consider whether to cast “Lady Bird” as Fresh or Rotten in the context of a perfect score that people were using to trumpet “Lady Bird” as the all-time best reviewed movie on RT. A "B-" does not an "A+" make. @RottenTomatoes @LadyBirdMovie pic.twitter.com/fR7PJ5GfZD

That’s just not how score aggregators work, especially not Rotten Tomatoes. Let’s break down the bizarreness of the logic here:

In other words, Smithey’s rotten review doesn’t seem to be indicative of what he actually thought of the movie, but rather what he thought about the hype it was getting. He didn’t think it deserved to be the best-reviewed movie on Rotten Tomatoes, and then decided to manipulate the system to take the achievement away from the film.

As one reply tweet aptly pointed out, it’s the equivalent of scoring a movie a 1/10 on IMDB because you didn’t like its current rating, regardless of what you actually thought of the movie.

To me this just hurts the credibility of Rotten Tomatoes. That’s the equivalent of rating a movie 1/10 on IMDb because you don’t think it deserves the rating it has.

Smithey either misunderstands how Rotten Tomatoes works or is abusing his power as a critic. The ‘Tomatometer’ is not a like a test score meant to indicate how well a movie did on some arbitrary scale, it’s simply a measure of critical consensus on whether a movie is good or bad. There’s definitely a correlation, but there’s a reason Rotten Tomatoes also has an average score beneath the Tomatometer for comparison.

The way I see it, Rotten Tomatoes is simply a good measurement of whether a movie is worth your time or not. Does it mean every movie with a 90+ is going to be a life-changing experience? No, but it’s at least a solid indication I won’t feel like I wasted $15 and a few hours of my life.

That said, there is an issue with the way people blindly rely on aggregators as definitive truths, and Rotten Tomatoes is among the more misunderstood. Without knowing how it works, its score can be misleading about whether a movie is truly great, and the company could stand to make average scores more prominent for additional context.

A movie that’s universally reviewed as “pretty good” could outscore a potential masterpiece that’s simply more divisive. For example, I’d rather see a movie with a 80 percent Tomatometer that averages an 8/10 than a movie with a 95 percent that averages a 7/10. But crucially, the onus is also on the reader to understand what the score means and how to let it inform their decisions.

Smithey’s faulty logic does serve as an important reminder that aggregated scores are simply tools, and that you should be listening to the individual critics you trust more than a single number. And again, you have every right to dislike a movie, no matter what everyone else thinks. But when a troll decides to abuse a system out of a misguided sense of self-importance, he deserves to be called out.

Read next: Facebook to add pre-roll ads and other changes to videos