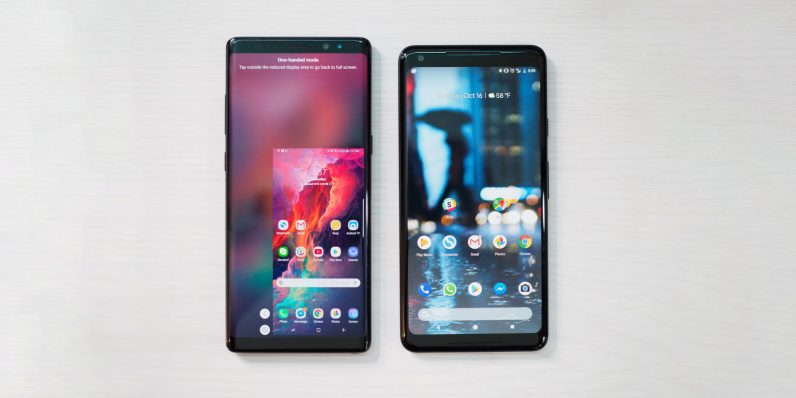 One of the most common complaints levied at Samsung’s Note 8 is that it doesn’t do enough to differentiate itself over the Galaxy S8+. But after testing the device for about six weeks, there’s one clear advantage: the Note 8 is a lot smoother than the S8 in the long run – and it even compares favorably to the Pixel 2.

Samsung has been admonished for its heavy Android skins ever since the early days of TouchWiz, and though it’s tidied up in recent years – especially with the introduction of the ‘Samsung Experience’ UI with the S8 – it had never quite nailed making a phone whose performance holds up over time. In my experience, usually all it takes is a couple of weeks and a couple dozen apps to start to feel a device slowing down significantly.

Six weeks in, that’s not the case with the Note 8.

With the disclaimer that this is just one reporter’s anecdote, the Note 8 is noticeably faster than any Samsung device I’ve used for an extended period of time – at least without micromanaging software.

When I compare it to a months-old S8, the difference is significant. My S8 isn’t bad by any means – and there’s much more to a phone than perfect smoothness – but it’s prone to hiccups and dropped frames when things get busy. Yes the Note 8 has an additional 2GB of RAM, but more RAM has rarely been an accurate indicator of smoothness on Android. The bigger difference almost certainly lies in the software.

The Note 8 is running version 8.5 of the Samsung Experience UI and Android 7.1.1, while the S8 runs 8.1 and 7.0, respectively. Though Samsung touted a redesigned camera app and better multitasking on version 8.5, it also claims to have worked to eliminate dropped frames and overall responsiveness. Manufacturers claim speed improvements all the time, but for once, it’s actually noticeable.

I’ve seen other Note 8 users make similar remarks, so I decided to do some more testing. I loaded both phones with the exact same selection of about 25 extra apps, and matched system settings as close as I could. I tried using each as my primary phone for a few days, and took both phones with me everywhere. The Note 8 was consistently smoother.

There was almost never a moment where the Note 8 dropped frames or its performance hung up significantly. Again, the S8 was still ‘good’, but it occasionally suffered from some janky scrolling, delays switching between apps, and, in a couple of instances, would be unresponsive for a few seconds. Turning off animations in developer settings made the differences even more apparent.

They’re all running a Snapdragon 835, and I still don’t think the RAM was the sole explanation, because the difference was noticeable only running a handful of apps. The only other variable I could think of was that my Note 8 was an unlocked model, and my S8 was a T-Mobile phone, although I disabled all the carrier apps. So for good measure, I compared it to a Verizon S8 as well – without all the extra apps – and found the same results.

Meanwhile, XDA has run much more scientific tests on the Note 8, and found significant improvements too.

But perhaps the biggest testament to how the Note 8 has held up over time is how favorably it compares to the Pixel 2 family, phones that represents the pinnacle of Android performance. I went into my test My Note 8 loaded with dozens of apps wasn’t quite as fast as a Pixel 2 XL fresh out the box, but it was really, really close. The Pixel 2’s fingerprint sensor is snappier and it’s overall a hair faster to load apps, but it’s close enough that I’m not sure I’d be able to tell the difference without a side-by-side comparison.

It made deciding which phone would be my daily driver much more difficult than anticipated. I ended up picking the Pixel 2 XL for a few reasons – the camera, Oreo, update speed, battery life, overall minimalism – but performance, surprisingly, wasn’t really one of them.

I sometimes find myself second-guessing my choice too. I’ve previously written that stock Android has diminishing returns on performance with each passing generation, and that I’ve generally come to value additional features over barebones Android. With the Pixel 2 XL’s display controversies and lack of a headphone jack, microSD expansion, and wireless charging, it’s certainly not a clear-cut winner.

Moreover, it’s a testament to Samsung’s newfound optimization skills that the Note 8 manages to perform this well with so many features – a themeing engine, one-handed mode, floating windows, pen support, screen recording, etc –  not available on the Pixel 2. There’s even an argument to be made that practically speaking, the Note 8 is the faster device, because its plethora of software features allow you to multitask more efficiently.

I bring this all up because as reviewers working with embargoes and deadlines, we often don’t have more than a week or two to test devices. Once reviews are done, we need to move onto the next flagship. Though performance might be excellent week one, sometimes those claims are simply not applicable in the long term. This has been particularly true of Samsung phones and other devices with heavy skins – that’s one of the reasons so many power users prefer stock Android.

Which is why it’s notable when, in four years of reviewing gadgets (and many more of fiendishly following tech news), the Note 8 is the first Samsung phone I’ve used that feels so darn buttery nearly two months later.

I went into my testing period with the preconception that the Note 8 would suffer from the same issues as its predecessors, and that it would simply be an S8+ with a pen and dual cameras. I said as much in my first impressions post. What I’ve found has been so much better. Credit where credit is due.

Of course, there’s still a chance Samsung will screw everything up with a future update to the Note 8. But for now, it’s refreshing to see Samsung is getting as good at optimizing software as it is at cramming it with features. Here’s hoping it shares some of that love with the S8 when the next big update rolls around.

Read next: 4 free tools for your startup that you can start using today