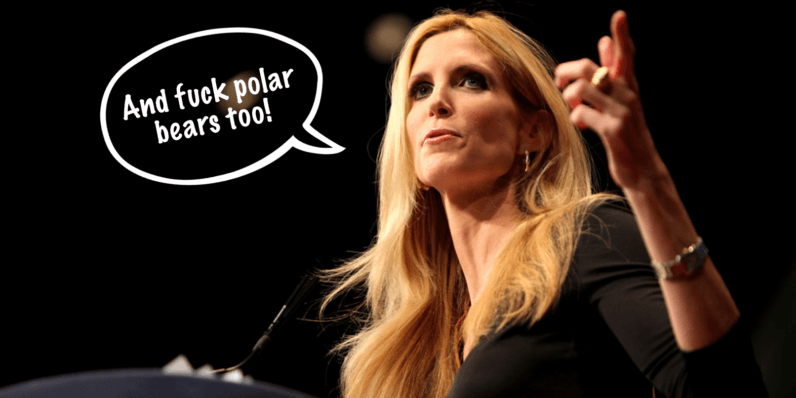 Hi Ann! Wait, can I call you Ann? Fuck it, doing it anyway.

I’m writing in regards to a tweet you sent out earlier this week. In it, you empowered a populace that’s growing to not only ignore, but actively resent science. Luckily, it’s the same group who only recently discovered their 500 minutes of free AOL were about to expire. Which is a shame, really; I was sort of hoping to show them Google.

But, I didn’t come here to insult you. I mean, I did, but I need to pace myself; we’re just getting started.

I don't believe Hurricane Harvey is God's punishment for Houston electing a lesbian mayor. But that is more credible than "climate change." https://t.co/K7d7mopY5Q

Not sure where to begin, to be honest.

The issue isn’t conservative vs liberal; it’s about intellect over whatever it is allowing weird noises to spill oh-so-effortlessly out of your mouth. Science affects each of us equally, and speaking out against it does a great disservice to us all — no matter what your political affiliation.

“The good thing about science is that it’s true whether or not you believe in it.”

I’ll never criticize people for believing in a god, nor do I care which one you believe in — or if you believe in one at all. But I have my limits when it comes to how long I’m willing to remain silent when religion starts nudging science out of the way. Replacing a theory that, by its very nature, can be proven or disproven with unwavering belief in an omnipotent being is, for me, something I just can’t wrap my head around. And although Coulter isn’t the one saying Houston’s lesbian mayor is the cause of Hurricane Harvey — nor does she seem to believe it — the belief remains.

While I can’t comprehend, for example, how educated people in 2017 believe God is pissed at Houston over who its mayor bumps genitals with, the fact remains that these people exist. Seriously, did the hurricane even stop to ask victims who they voted for?

And that’s the problem. When you take away science, human nature forces us into finding something to replace it.

Houston is under water because of climate change, plain and simple. Harvey isn’t your typical hurricane: it’s a grand example of what the future of severe weather looks like. Katrina offered the recipe, Harvey served up a big ‘ol slice of shut-the-fuck-up climate change deniers.

Worse, the tweet was in response to a legitimate news story. When we silence legitimate news, we give rise to alternative outlets positing bogus theories and facilitating the spread of 2017’s most popular buzzword: fake news. And Politico’s article, if you’d bothered to read it, is exceptional — the type of journalism we need more of.

The fact is, merely talking about news on TV — or YouTube, or Facebook Live — now means some will hold you in the same regard as Walter Cronkite. Writing books lambasting political figures and pimping them on each appearance of Fox and Friends does not make you credible — in fact, even calling you a credible source on climate change is akin to slapping a Marlboro sticker on Sean Hannity and letting him race the Daytona 500 on foot.

You’re not a scientist; you’re a writer, a lawyer, and arguably one of the worst people on the planet.

But, and I want you to hear me when I say this: your words have power. People hold dear to them as if you’d written the 11th commandment. They’re typically the same idiots who believe the New York Times or Washington Post — two of our oldest and most-respected news organizations — are peddlers of fake news, but I digress.

The point is, your words carry weight.

You’re but one of many, and unfortunately your voices are getting louder. As the chorus grows, American sentiment falls like my self-esteem when left alone with Krispy Kreme donuts. And what are you arguing for? If you win the fight, and climate change turns out to be a complete hoax, you’ve gained what exactly — polluted ground water and massive collapse of the world’s ecosystems?

And what happens if you’re wrong?

“Society grows great when old men plant trees whose shade they know they shall never sit in.”

Do you ever give pause and think about what kinds of seeds you’re planting?

Read next: Google Assistant is coming to lots more gadgets this year