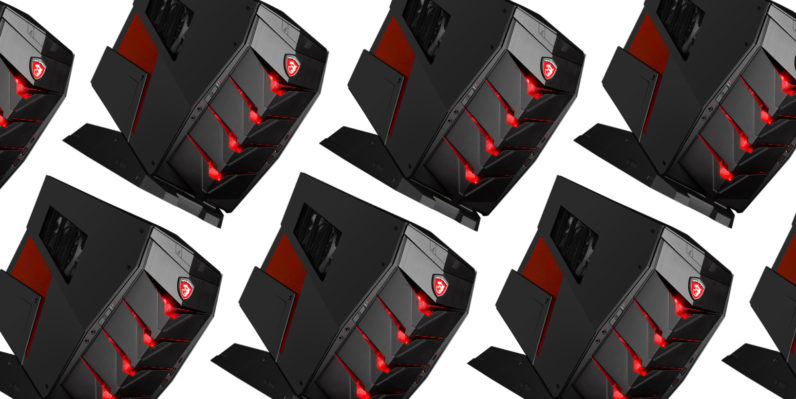 As we look back on the year, it’s easy to see 2016 hasn’t exactly been great for tech design. Yes, there were some beautiful products — just take a look at Sharp’s edgeless concept phone. But mostly everything else has been total shit.

We saw the second refresh of a tired iPhone design and laptops that all looked like MacBooks one way or another. But tech design isn’t bad when it’s boring, it’s bad when it’s bad. And oh my, I don’t know where to start.

Even though Alienware used to create the worst-looking desktops, MSI is now reaching for the crown. In its own words, the top-of-the-line Aegis is “a real weapon shield, designed from scratch and built to be the ultimate defense and attack platform.” It also looks like a computer had sex with a demon.

Why does gaming hardware always have to look like it’s ready to devour a human soul? Its Mystic Lighting Technology utilizes an app to switch between colors, and in combination with the shell-like front gives it an angry demeanor that, according to the company’s marketing, gamers seem to love.

For all the horrible design crimes MSI is trying to get away with here, my favorite is the seesaw-like construction that makes it seem like you could flip the whole thing over to the other side. I don’t know if it’s actually possible, so if anyone has a spare $349 to try it out, please let me know.

Vertu must be the world’s most pretentious phone brand. Its devices start at $8,400, look someone ripped the seat off a Ferrari and only make sense if you’re extremely rich and have zero taste (two things that often go together).

The company’s latest addition to its line-up combines “the finest English craftsmanship, cutting-edge technology and exclusive services” in the most god-awful looking smartphone on the planet. It’s available in a range of ridiculous models like Garnet Calf, Grape Lizard and Clous de Paris Alligator. All of them feature a back that’s covered in animal skin and, of course, two suicide doors hiding a SIM card and micro SD slot.

Dear reader, there are better ways to spend your money.

We’ve already talked about this, but that doesn’t mean it gets a pass. I haven’t seen any device look more hostile this year than Acer’s Predator 21X gaming laptop. From its illuminated mechanical keyboard to the curved screen, the device looks like a spawn of the devil himself.

There’s aggressive LED lighting integrated into virtually every part of the body, and complement the disgusting graphic on the front. The Predator 21X combines this with an excessively large rear end and the addition of numerous holes everywhere to keep it from instantly melting down.

If you’re looking for something to scare your design-conscious friend to death this Christmas, Acer has you covered.

Unlike other products on this list, headphones are something you actually have to put on top of your head for them to work. So when you’re buying them, you better make sure they looks good.

Unfortunately their design isn’t always as sophisticated as, for example, Bose’s QC35. There are a ton of horrendous gaming headphones like the Qisan G3100, but in a lot of ways it’s not as bad as this one.

The Zik tries really hard to look fancy and luxurious, but fails miserably. Its leather earcups just scream “Please call me pretty!” but holy shit they look ridiculous. The faux-leather pattern is so badly done, that it almost drowns out the logo imprinted on one of the shells. It’s still visible, however, and ‘Parrot’ isn’t something I would want others to see on my right ear all the time.

This might not be ugly in a traditional sense, as it’s the standard white Apple cable fare. But it’s still included because, damn, this isn’t how your start a wireless revolution. The outside might look fine, but its reason for existence is as ugly as anything in this list.

Read next: Learn what it takes to become a well-paid data center manager