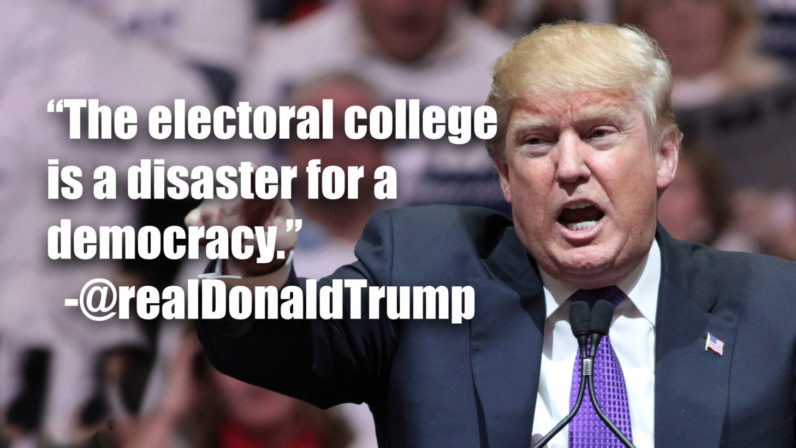 Donald Trump is going to be the next US president. But according to his own Twitter logic, he shouldn’t be.

The night of the 2012 election, in a fury over Obama’s imminent victory, Trump tweeted his disdain for the Electoral College:

The electoral college is a disaster for a democracy.

At the time, it seemed like Obama would win the electoral college, but Romney would win the popular vote. That did not end up up happening, with Obama winning by nearly 5 million votes and almost 4 percentage points.

As fate would have it, it turns out the Electoral College is the only reason Trump is the president-elect (if you’re not from the US, I recommend you check out a primer or two). According to Google’s latest election numbers (sourced from the Associated Press), with 99 percent of votes counted, Hillary Clinton continues to lead by approximately 300,000 votes:


Of course, that’s a tiny margin out of about 120 million votes cast – less than a single percentage point – but a margin nonetheless (and current projections expect it to continue or widen). It’s also a margin that is highly misrepresented by the current electoral college count of 279 to 228 in favor of Trump.

In almost any other democracy, Clinton would’ve been president. The Electoral College has now led to four candidates who have lost the popular vote becoming President of the United States. As YouTuber CGPGrey points out, that’s 7 percent of all US elections – a pretty huge margin of error for a decisions of such import.

After months of complaining about how the system is rigged against him, it seems a part of the system actually worked tremendously in his favor. After repeatedly implying he would deny the election results if he didn’t win and decrying the electoral college, Trump seems to have no problem with it now that he is about to become the most powerful man in the world.

Of course, it’s not like I think Clinton would behave any differently if the situation were flipped (which with the slim margins, it easily could have been). And though a 2013 Gallup poll showed 63 percent of Americans believe the Electoral college should be abolished – that’s certainly my own view –  there are reasonable arguments to defend the system to prevent some of the most populous states from bullying smaller ones. At the end of the day, we live in a representative democratic republic, not a direct democracy.

But thanks to being possibly the most tweet-happy politician of all time, we know what Trump’s opinion on the Electoral College is, at least when it doesn’t directly affect him. As they say, the internet always remembers.

Read next: Canada confirms panicked US citizens were behind immigration site crash