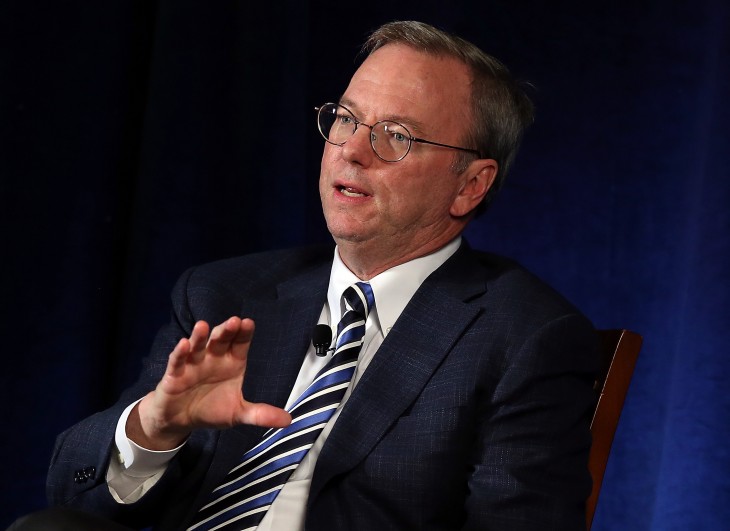 Given that the AlphaGo algorithm had less than one year’s experience and was only believed to be at a 3 dan level, compared with the 20 years it took Sedol to get to the top 9 dan status, the match looked like it should have gone to man over machine.

But, now that AlphaGo has already won three out of five matches, with just one more to go, it’s clear that we were underestimating the speed at which this technology is developing. The fact that it had made 3 dan status so quickly should have been a dead giveaway.

Someone who wasn’t underestimating the power of AI though, was Google, now Alphabet chief exec, Eric Schmidt, and this is no doubt the innovation that will keep the company intelligently serving our every need for some years to come.

Speaking to The Telegraph at the Go competition in South Korea, Schmidt said:

I can’t quantify our investment into AI, but it will eventually be embedded in everything… It started small, with hundreds of people and now we have thousands. It’s a very significant investment… They’re not in cul de sacs, they’re building things that will touch millions and millions of people.

Yes, if it’s not already, as with something like Google Translate, AI will be improving your every interaction with Google, making it an increasingly compelling part of our lives. As if it wasn’t already.

There’s no question that as [AI] becomes more pervasive, people doing routine, repetitive tasks will be at risk… I understand the economic arguments, but this technology benefits everyone on the planet, from the rich to the poor, the educated to uneducated, high IQ to low IQ, every conceivable human being. It genuinely makes us all smarter, so this is a natural next step.

Although Google hasn’t really been in the frame as a job killing company – compared to something like Amazon, which has maimed the publishing industry – its efforts in AI make it clear that it’s heading that way.

DeepMind, creators of the AlphaGo algorithm, and now owned by Google, is already working on healthcare projects that could see AI working alongside scientists to solve some of the world’s greatest challenges.

But, what will be left of more “routine” jobs now we know that its algorithm can beat a human at one of the world’s most intuitive games, and what we plan to do about that as a global digital society, is a hanging question.

Demis Hassabis, founder of DeepMind, has been a leading voice in AI safety talks and signed an open letter pledging that the technology would not be used for military purposes.

But that’s only one scary future scenario that AI presents: if it’s a future with less work for a lot of people, then citizens, governments and companies have to work together to understand how we plan to reshape our economy knowing that fact.

Schmidt says he knows the “economic arguments” around the risk to jobs that AI presents, surely soon, he’ll have to engage with them?

Read next: Chrome on Android will finally let you pause and cancel downloads