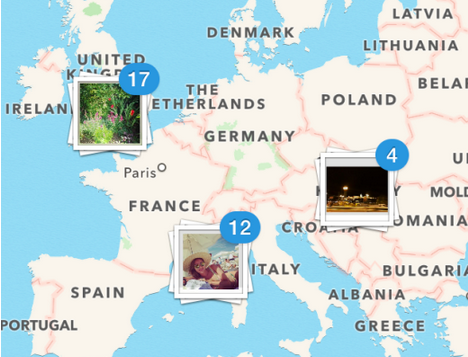 I turned on the news this morning to see that well-known British Formula One driver Jenson Button and his wife Jessica Michibata had been robbed in St Tropez as the rented holiday villa they were staying in was broken into.

Notably, the thieves got away with Michibata’s $388,000 (£250,000) engagement ring. Sky News showed an Instagram snap of her wearing it that she posted six days ago.

Feeling curious, I picked up my phone and opened the photo sharing app to check out the model’s page. Checking out the picture shown on the news channel, I noticed it was also pinned to Michibata’s photomap, along with several other images posted from the couple’s villa during their holiday.

Now I have no idea how this terrible ordeal went down and as someone who has had their home robbed, I do feel for them. But it did hit me that it seems crazy and careless for someone of such obvious wealth to be freely giving away their exact location.

I’m not saying don’t post holiday snaps, I’m just saying don’t put yourself at risk by pinning them to your location. Notably, Jenson Button has no photos pinned to his photomap.

A lot of people aren’t aware that even if you’re not opting for the ‘Name this Location’ option when you upload to Instagram, it’s still possible that the app has added your snaps to the stalkers dream that is the photomap.

But don’t worry, you can protect your privacy even if you’ve had it turned on until now by following Instagram’s steps below:

It’s a scary thought that if you proudly post a photo of your DIY skills at home, someone could potentially track down your exact address in a few clicks.

Read next: No one wants to protect your privacy

Read next: 5 things you need to know before launching your mobile app in Indonesia