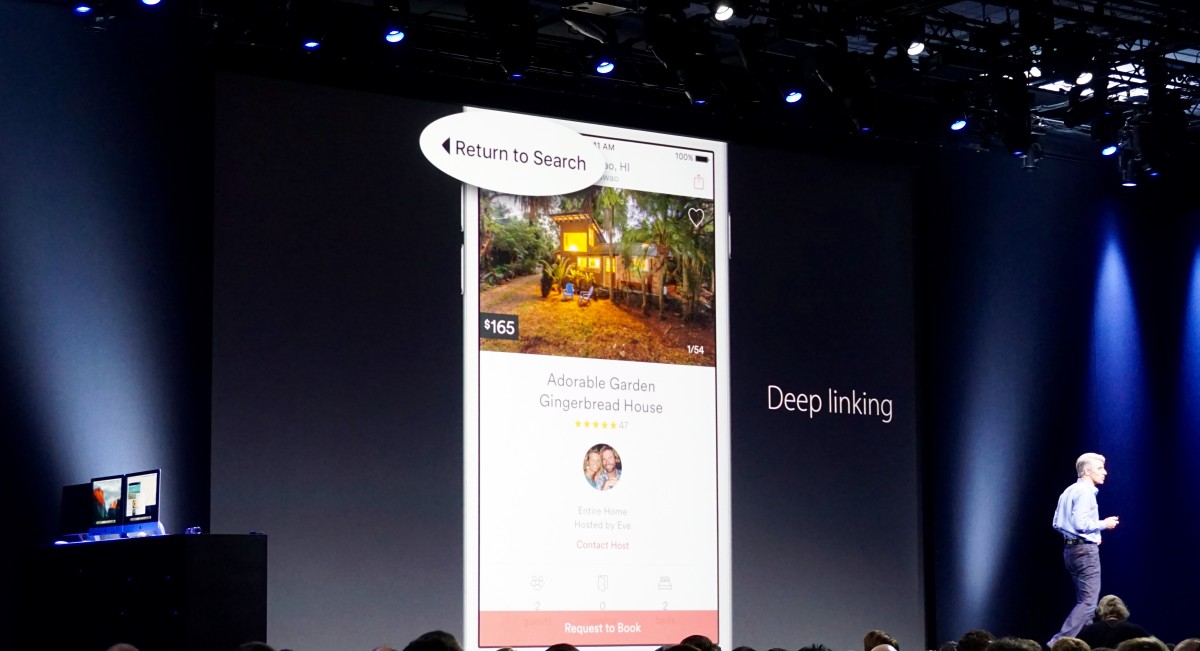 The App Store and Google Play have a problem, and both Apple and Google are hoping app indexing will solve it.

Google Play and the App Store have terrible search functionality. We’ve all run into scenarios where you’re searching for an app — by name — and it’s somehow tenth on the list an app portal returns.

The simple way to explain app indexing is that it’s a way for developers to let Google and Apple peek into apps and see what kind of content lies within, and which content users are accessing. This bypasses blind search keywords like “cooking” or “recipes” and dives right into what recipes an app may have.

Rather than search for a recipe app in the App Store and hope for the best, you’ll soon be able to search for the exact type of recipe you’re looking for right on your phone or tablet. If Apple or Google have an indexed app that meets your search criteria, you’ll know.

A link to the appropriate content will display, which might redirect you to a download for an app if you don’t have it installed. If you do, search will take you directly to the content within the app. Should a developer have an accompanying website for the native mobile app, you may be able to navigate there instead.

App indexing will soon be in use on both Android and  iOS, but Apple and Google are executing it differently. While Google wants developers to let it index app information wholly, Apple is cautioning developers against that.

With Google’s indexing, the company is content to gobble up all app data and let its powerful search algorithm sort it out.

Apple is tackling app indexing with the same tools developers use for Handoff. One of Apple’s main indexing tools, NSUserActivity, now has “new methods and properties that help you index activities and app states to make them available in search results.”

Google and Apple have methods for denying private content from becoming discoverable, but get there differently. Google makes Android app content discoverable unless a developer tags it with a noindex.xml tag (and links that to a seperate XML file), while Apple forces developers to make content public by adding an eligibleForPublicIndexing variable.

We didn’t want to create some kind of an ad hoc, one-size-fits-all indexing scheme that goes inside of your app and grabs whatever it can and stuffs it into Spotlight. That sort of approach for indexing worked well for the web, because that was uniform, but is the completely wrong approach for doing app search.

Apple’s documentation on app indexing underscores that commentary. A special note asks that developers “be sure to avoid over-indexing your app content or adding unrelated keywords and attributes in an attempt to improve the ranking of your results. Because iOS measures the level of user engagement with search results, items that users don’t find useful are quickly identified and can eventually stop showing up in results.”

App indexing is voluntary — neither Google or Apple are requiring it from developers. The apps and content that are best left out of search can remain that way.

Will app indexing fix app search? Yes, but it will take time before we know to what extent; as apps index, search will become more powerful. Google will have a quick one-up on Apple — app indexing is easy to implement, and feeds right back to the widely used Google Search.

Apple may prove itself in the long run, though. Forcing developers to make content discoverable might be a touch more tedious, but could make for a better experience.

If nothing else, it will be interesting to see which method works best for users.

Read next: How to name your startup