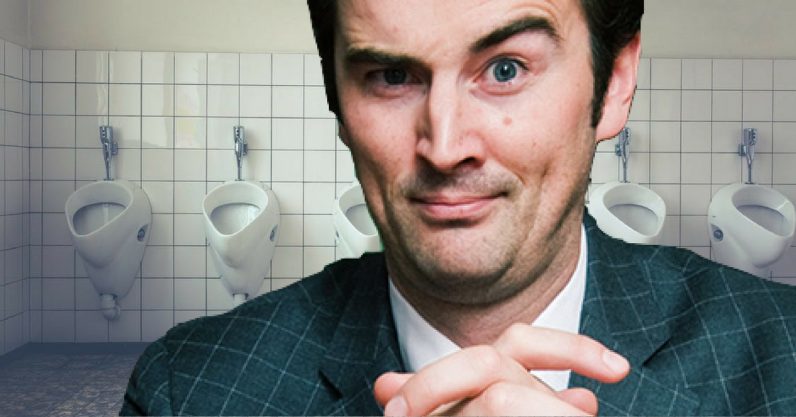 A couple of years ago I attended a conference in New York organized around Twitter. There were popular Twitter users and app developers and around 300 attendees. I wasn’t a speaker at the event, but I knew the organization and Chris Sacca, an early Twitter investor who had spoken at one of our earlier conferences in Amsterdam.

I was about to walk into the men’s room when two guys ran out saying something like “I can’t believe that just happened!”

I curiously walked in but there was nothing going on, except a guy going about his business in a stall. I did my own thing and started to wash my hands. The guy next to me was also washing his hands and nodded. I said hello and asked him if he was having a good conference. He said he was having a great time and was about to go on stage. I asked him if he was an app developer and he said he wasn’t.

Then he asked me how to get backstage, so I offered to walk him there. We were chatting a bit as we walked there until I bumped into Chris Sacca. I figured it would be nice to introduce them to each other so I said: “Sorry, I didn’t catch your name, but this is Chris Sacca.” They both looked at me with a bemused look on their faces until Chris said: “Uhm Boris, this is will.i.am”

Suddenly it all made sense to me and I felt totally embarrassed. Will.i.am was incredibly nice about it and gave me a hug and a handshake and told me not to worry.

And that’s how I met will.i.am in the men’s room in New York.

The reason I’m telling you this story — besides for it just being a cool story — is that the one and only will.i.am is attending TNW2018 as a judge for the Chivas Venture Global Final. For a chance to see him, in a men’s room or elsewhere, reserve your ticket now.

What we’ve been talking about this week:

😮 Drones will soon decide who to kill.

🤓 Reddit nerds are competing to prove their country is the most Bitcoin-friendly.

😬 Facebook says it wants to give you control over your data. It won’t.

What I’ve been thinking about:

Concerns regarding internet privacy have recently stretched beyond the tech industry and have pervaded global conversations about our future. People seem to be more aware of their threatened privacy than ever before, yet the number of people on social media users continues to increase. It’s crucial that we know how to protect our privacy online. VPNs, for example, can stop ISPs from seeing all of our internet activity and traffic. One of the best is StrongVPN, a fast and easy solution for navigating a truly open internet. Learn more about them here.