Zynga has just announced the global launch of CityVille 2, the sequel to its popular CityVille game. This is the social gaming company’s first game since it announced earlier this month that it would be shuttering TheVille along with 13 other games, resulting in layoffs.

During Facebook’s third quarter earnings call, CEO Mark Zuckerberg said that social gaming wasn’t performing as well as he had hoped. He pointed out some disappointment with Zynga along with other companies on its platform so people were wondering what lay ahead for the company. Sean Ryan, the social network’s head of gaming partnerships, said that he believed that while Zynga had a difficult quarter, it wasn’t out of it yet — “they will come back“, he said. CityVille 2 might be the spark that ignites that revitalization.

Creating The Next 100 Million User Game

Designed by Brian Reynolds, the creative guy behind Frontierville, CityVille 2 is the next evolution of the two-year old game that has attracted and captivated the minds of millions people (at its peak 100 million monthly average users). The focus was that Zynga wanted to find a way to really re-engage players while also preserving what made the original CityVille cool. The team wanted to think about the city beyond just a game, but also as a toybox allowing players’ minds to go wild. 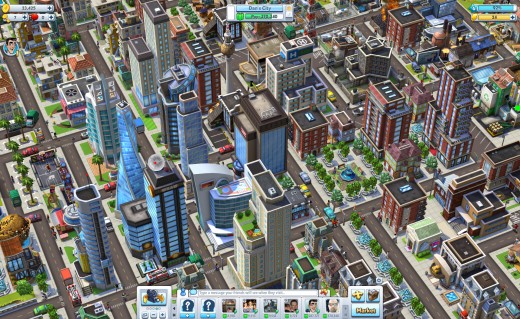 The game allows players to create their own 3-D metropolis, almost like you would expect with Sim City or Civilization (although it doesn’t consider itself to be a replacement to either game) with different activities and events taking place during the day and at night. The game involves all the typical features you might expect from a Zynga game with a  “build-it-yourself” mentality, while also having a narrative feature to it — one of the main stories players will come across is what happens when a mansion mysteriously burns to the ground. It is then your choice to live out that scenario in CityVille 2 and, along the way, meet up with a cast of characters to find out who did it, very similar to how you would solve the mystery on Clue. And that’s just the first act!

Other interactive features include having a “do-rameter” that will help guide users through all the activities in the game in order to be rewarded while also helping to keep them caught in the moment. Players also can compete against one another to see who can build the most impressive city and who can become the District VIP — the more you check into a district and visit, the better your chances of getting more bonuses and prizes.

A leaderboard will be featured in the game that will show the players with the biggest and most impressive city. A timed version is also included so you can find out how you’re doing in the past week, month, etc. In-game chatting/messaging is included so players can talk trash one another or offer support to their friends.

If that wasn’t enough, CityVille 2 comes with new features like allowing players to create their own districts (or neighborhoods) like what you would encounter in cities like New York, San Francisco, Tokyo, London, etc. If you’d like to create Chinatown or the French Quarter in your city, go right ahead — as you build it, more features will be available to you.

The game has smart gaming enabled, meaning that what you add into specific areas will open up a host of options that are available only under that circumstance. So if you have a park you want to add to a district, options like a merry-go-round, would become available and can be placed only in that park. Then, the surrounding areas would have events you could engage with that would appear at that time. Another example is if you place two streets parallel to each other, the game will convert it to street parking. Smart, right?

Players will find that CityVille 2 has a slightly different feel that what they have come to expect with the original CityVille. The core essence of CityVille has been preserved, but visuals have been updated with more kinetic game play. Zynga’s goal was to try and make every click matter and offer you feedback for everything you do. It has placed more emphasis on storytelling while also having a bit more of a snarky and adult theme to it.

Both CityVille and CityVille 2 will continue to remain online for players to interact with. Zynga has found that with these popular genres, players are interested in engaging with both because they appear different enough.

CityVille 2 is available today and will be available on Facebook. Zynga says that it will soon have the game on its site in the future. It’s available in 15 languages, including English, Danish, Dutch, German, Japanese, Korean, Norwegian, Swedish, Thai, Turkish, French, Italian, Portuguese, Spanish, and traditional Chinese. This is Zynga’s second full 3-D game (FarmVille 2 was the first) and its third built on Adobe Flash Player 11.