This article was published on September 11, 2020

The Arc GT is a fun little dry herb vaporizer from Zeus, a relative newcomer to the scene. It’s a quality vape on its own merits but the star of the show here is an accessory called the Iceborn (sold separately) that turns this little pocket-sized oven into an ice bong.

But before we get to the potatoes, let’s talk about the meat. The Arc GT costs $229.99 putting it squarely at the mid-high end of the market where it bumps up against the likes of the Davinci IQ and the Pax 3.

In the looks department, I would normally pan the fact that it only comes in black because I think the tech world is saturated in melancholy darkness. But in this case, the more understated my pocket vape is the more I like it.

I like the gold lettering on the GT stamp, which it turns out is indicative of the difference between the regular Arc and this model. Both are German engineered but the GT has a gold flow chamber that’s supposed to help create more vapor at lower temperatures. There’s a $30 difference in price between the two models – unfortunately I can’t speak to how well the base model works as I’ve only tested the GT.

What I can say is that the GT makes thick, tasty clouds when packed and hit right. Unlike a few other dry herb vapes I use, the GT requires a firmly (but not too firmly!) packed bowl to produce the optimum amount of vapor. In my experience, this meant using a bit more flower. But the return here is that you get a bit more vapor in each rip.

The design, while nothing out of the ordinary aesthetically, appears well-implemented here. The device is comfortable to hold and operate one-handed and a few smart choices under the hood makes it easy to load, clean, and empty.

It includes a “multi-tool” (read: pokey thing) that magnetically attaches to the bottom of the device. This inclusion feels a little forced at first, but upon realizing that it covers the USB port (which always seems to get crusty with flower bits on dry herb vapes of every model) it feels smart.

Ease-of-use is a high point for the Arc GT. The silicon top is easy to remove and the device is a cinch to load with herb. It only has a single button which operates the power and temperature. To turn the Arc GT on you hold it for two seconds while three LED lights turn blue in succession. It takes about 45 seconds to heat up, which is indicated by pulsing blue lights. Once the lights turn green the device vibrates and it’s ready to use.

The mouthpiece is a simple slot type, but it works well and draws smoothly. By itself, the Arc GT produces large clouds and, in my opinion, retains more flavor than most other dry herb vapes on the market. There’s still no substitute for a volcano, but for vapes on the go I’m hard-pressed to think of anything that does a better job.

I highly recommend the GT. It has a small form factor and a subdued aesthetic that make it perfect for professionals and adults who want to look like adults when they vape. But most importantly, it’s a no muss, no fuss vape. You don’t need a degree in vapeology or a 20-page manual to figure this thing out and use it. As long as you grind your flower and pack it correctly, you’ll blow clouds.

And, if you use the separately-purchased Iceborn add-on, you can blow frosty clouds.

Zeus sent me an Iceborn add-on to review alongside the Arc GT. Normally, I scoff at silly sideshow products like this but a cooling system for a cannabis vape is an excellent idea. 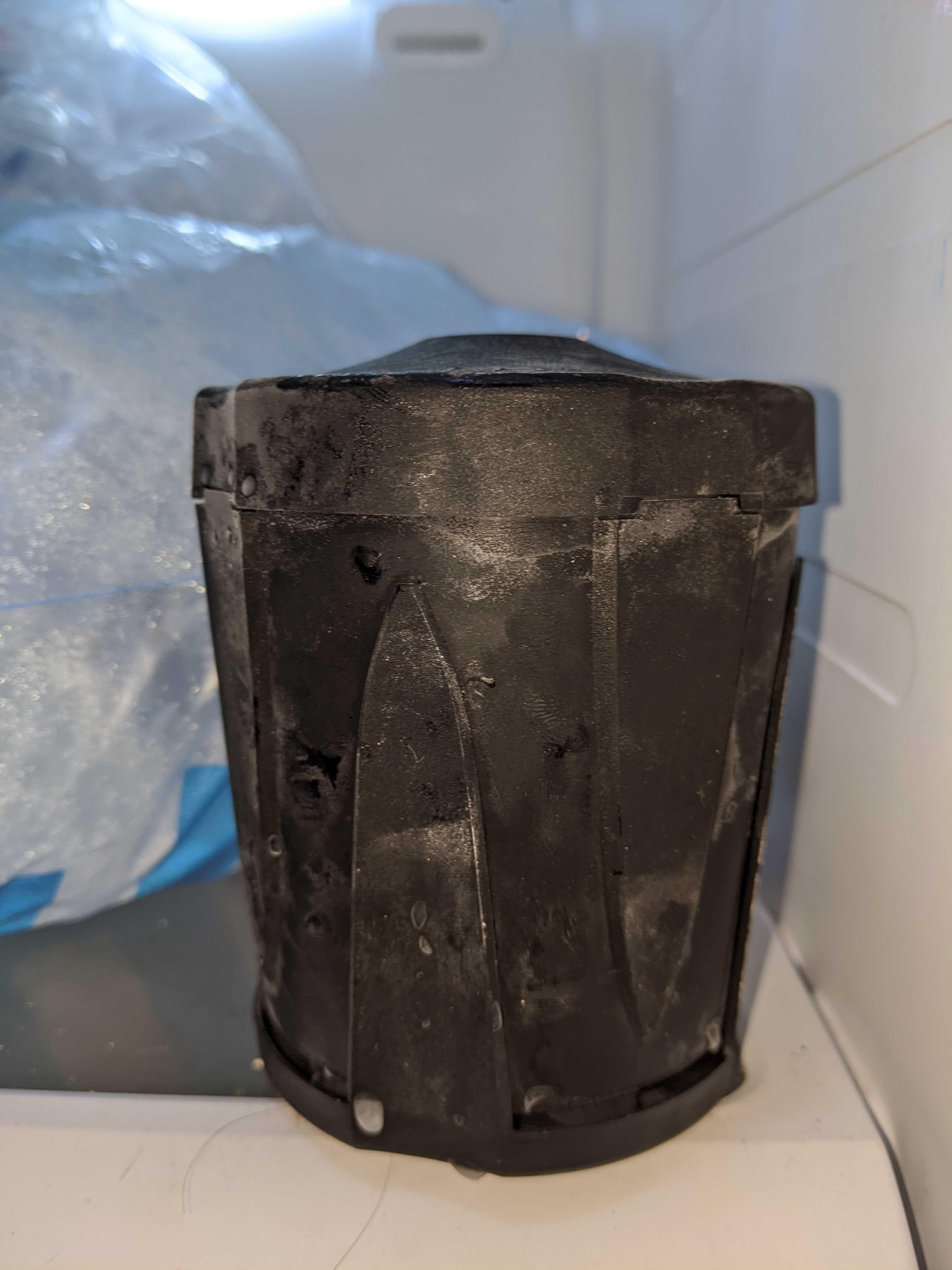 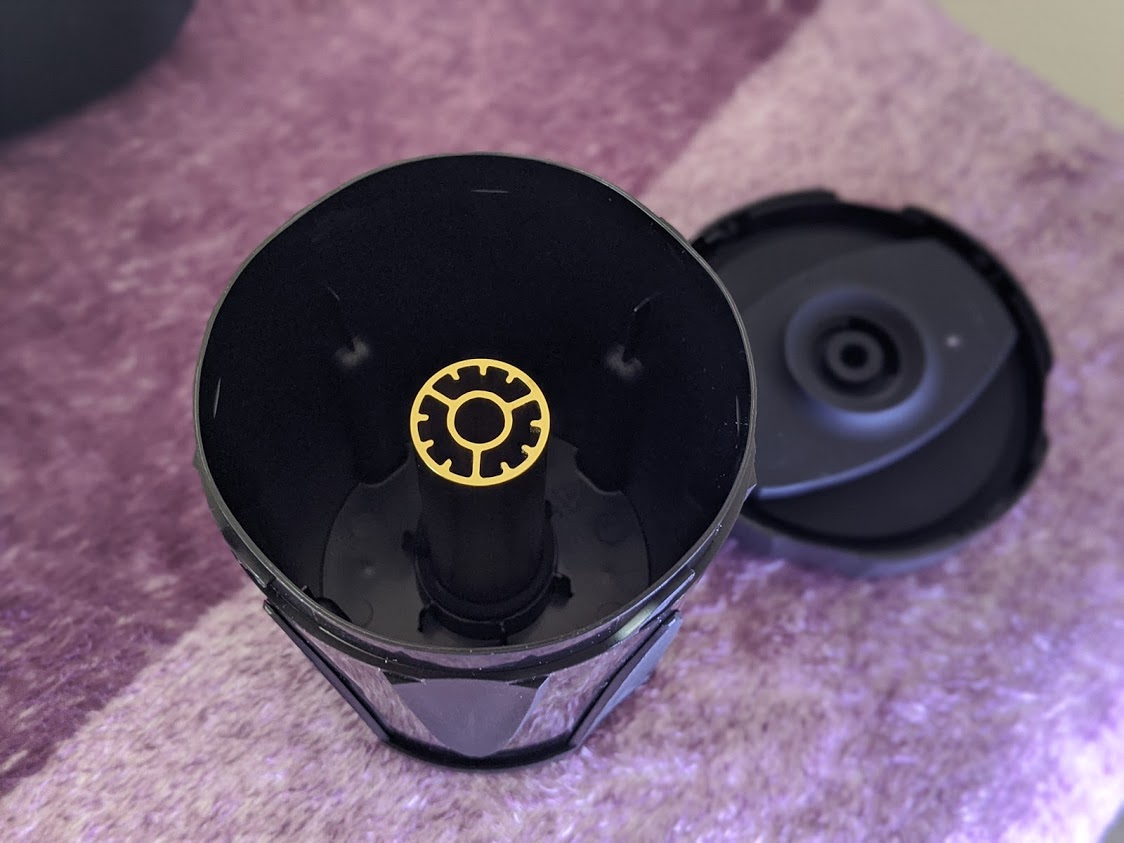 I’m happy to report the Iceborn isn’t a gimmick. It’s not perfect, don’t get me wrong. But it works. It’s basically a cup with a shaft of metal running through the middle. You fill it with water, freeze it overnight, and then slap a tube on one end that goes to your vape and one on the other that goes to your mouthpiece.

You suck the vapor through the Iceborn, which draws it from the vape. It’s quite simple and delightfully effective. I’d assumed I’d get worse draws through all the convoluted tubing than from just putting the Arc GT to my lips as usual. I was wrong.

Pulling through the Iceborn actually makes it easier to draw bigger clouds. And, thankfully, those bigger clouds are a lot less harsh when they’re cool. It might feel a little gimmicky at first, but it’s the only way I want to vape dry herb now.

There are, however, a few kinks. The tubes don’t fit snug so any jostling causes them to pop off the Iceborn mouthpiece attachment on the vape. Another problem is that you need some space to use the vape and Iceborn. I had to set them both on a table and carefully use the whip and mouthpiece so as not to cause the Arc GT to fall over. It’s too small to really serve as a table-top oven for the Iceborn.

Another problem with this setup is that the Arc GT shuts off if you don’t touch it for 30 seconds. Since the vapor is cooler, you’ll be taking longer hits with the Iceborn and that means you’ll be forced to grab the vape twice a minute so it doesn’t start cooling your herb while you’re hitting it. That got pretty annoying.

Other than those caveats using the Iceborn – which I still recommend using over just the Arc GT by itself – this is a fantastic vape. The price might be a tad bit high for a vape that doesn’t have an option for e-liquid products, but I don’t use anything that isn’t flower so that’s not much of a consideration for me.

The Iceborn attachment is sold separately from the Arc GT for $39.99, however it can work as a sort of standalone ice chamber for any source. The included tubing should fit typical glassware — meaning you could use it with a regular bong. And, if you’ve smoking apparatuses that you can somehow get the tube to draw from, anything can be an ice bong with the Iceborn attachment and a little ingenuity.

Back to the Arc GT itself, battery power is great. You’ll get about 7 or 8 full 10-minute sessions between charges on the first level of heating. I didn’t spend much time with higher levels because my well-ground flower vaped at low temps in this device like it’s supposed to.

At the end of the day, this is a surprisingly high-quality product that lives up to its own hype. The Iceborn add-on is more than just a fun way to impress your tech-nerd friends, it actually cools the vapor enough to make it more palatable to those who still prefer combustion.

You can pick yours up here on the Zeus website, here for European readers.

So you’re interested in TNW? Then join our online event, TNW2020, where you’ll hear how artificial intelligence is transforming industries and businesses.