Before you rush on it, it’s worth mentioning that you need at least one channel or playlist for the feature to work properly:

Here are the steps to follow to create a Slam:

In the example below, you can see the results with my personal selection of Faireset videos (in French):

As you can see, a Slam is actually a video “battle”, where you can vote for your favorite video. The feature itself isn’t entirely new, and YouTube had been experimenting this idea for a few months. However, what’s interesting is that you can now manage the game yourself, by handpicking the videos that will be included.

Once you’re done curating your game, you can play it solo and earn points by predicting the crowd favorites. Yet, it will probably be funnier to share the link with your friends or play together in a Google+ Hangout, as YouTube suggests. 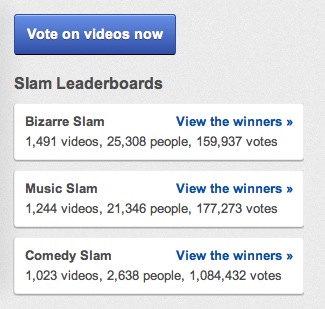 If you are uninspired, you can also decide to subscribe to pre-selected Slam leaderboards, which can help you find the cutest or the weirdest videos, among other categories.

From Google’s perspective, Slams are also a good way to unveil and promote the most popular videos on its platform.