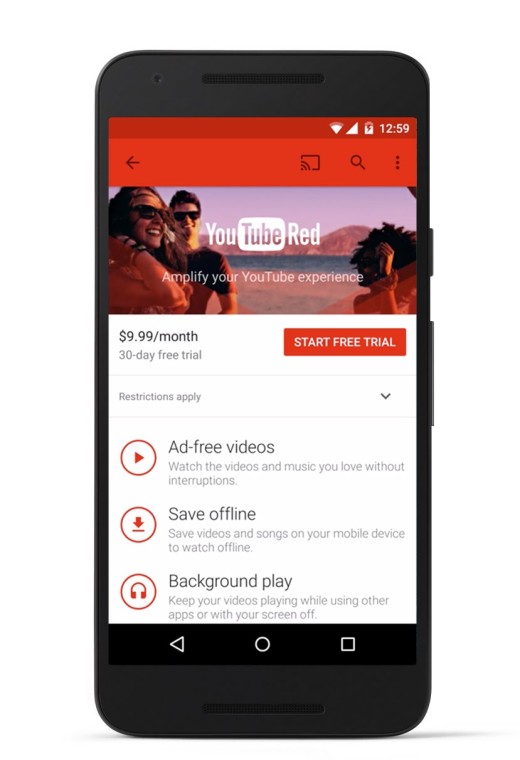 As previously rumored, the paid service will offer ad-free videos alongside original video content. They movies and series will feature YouTube “creators,” i.e. bloggers and actors who’ve made a name for themselves through their YouTube channels.

Get your mind out of the gutters. YouTube Red has nothing to do with that, ahem, other video service with Tube and Red in the name.

Some of the original content feature the following titles:

You get the idea. Some of the content definitely skews meta.

The service will be available on Android, desktop and mobile Web for $9.99 per month – a buck cheaper than Netflix HD. iOS users will have to fork over $12.99, however.

YouTube Music will offer personalized content suggestions and allow users to discover trending videos. The more you add to your Favorites tab (or dislike them), the more the app will be able to recommend music stations you might enjoy.

You’ll also be able to opt for more or less variety in the recommendations setting to get content that you’re specifically looking for.

YouTube initially tried its hand at paid content back in 2014 with Music Key, a $7.99 monthly service for free music streaming. It never made its way out of beta.

YouTube Red will work with Google Play Music so as long as you have a subscription to one, you’ll receive access for both services. For $10 a month, getting its own unique combination of Spotify and Netflix seems like quite the deal.

YouTube Red officially launches on October 28 in the US. Members can try the service free for one month. The company says it plans to expand to other markets in 2016.