According to the Syrian Center for Media and Freedom of Expression (SCM), Syrian blogger and activist Razan Ghazzawi was arrested by police at the Syrian-Jordanian border yesterday. 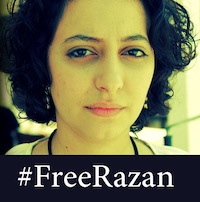 The US-born Syrian blogger, one of the few in the country who blogs under her real name, was on her way to attend a conference about the freedom of press, entitled ‘Defenders and Media Freedom in the Arab World,’ taking place in Amman. Upon reaching the border, she was detained.

Since the beginning of the uprising in March in Syria, her blog has been used to document arrests in the country, and the last blog post she made before her arrest was to announce the release of fellow Syrian blogger Hussein Ghrer. Blogging since 2009, Razan works as a media officer at the SCM.

A site collating all the available information on Razan’s arrest reads:

Prominent Syrian blogger and activist Razan Ghazzawi was arrested today (December 4th, 2011) at the Syrian-Jordanian border while on her way to attend a workshop for advocates of press freedoms in the Arab world.

A Facebook page has been created calling for Razan’s release and already has over 3,000 likes.

Syria, and its neighbours, have proven to be an intolerant ground for bloggers. Syrian developer Anas Maarawi was arrested in July in Damascus, released almost 2 months later. Bloggers and activists in Saudi Arabia, Morocco, Egypt and beyond, continue to find themselves the target of authoritarian regimes. A watchful eye on statements made on social networking sites like Facebook and Twitter has also led to yet more arrests in the region this year.

For tips on what you can do to help, take a look at this list.