For most marketing teams, inbound is no longer a foreign term – three out four marketers around the world now prioritize an inbound approach. The key to making this strategy work for your brand? Focus on earning your consumer’s attention via engaging content rather than buying it.

For marketers, this means you’ve got to become storytellers, offering high-value, low-branded content to enhance a consumer’s online experience while also staying in the forefront of their minds. This can be an overwhelming task, particularly because effectiveness relies on developing a long-term strategy versus throwing something together off the cuff. A great solution that will help you streamline this process is developing a content calendar.

Editorial calendars allow you to plan out months of quality content ahead of time while also helping you determine the optimal time for promotion. Wouldn’t it be great, though, if you knew the perfect time and the best asset to produce that would optimize social shares?

To better understand what generates the most social traction each month, the team at Alexa used BuzzSumo to pull a year’s worth of content – published between December 2014 and December 2015 – and then compared how event dates impacted social reach using their own competitive intelligence tool.

Whether you have an existing outline or are starting from scratch, a content calendar is the framework for the ongoing story of your brand, so you’ll want to make sure it reflects the latest social trends. Here I’ll walk you through three key insights to keep in mind when planning – or updating – your next few months of content.

1. If your goal is general awareness, consider producing a video

It’s one of the highest shared content types for nearly every event.

There’s no denying that people love video – on digital devices alone, we’re averaging more than 20 minutes a day – and the data revealed that it was one of the most shared content types last year. Some key takeaways about video to keep in mind during your next production include the following:

Although it’s not much of a surprise considering the site boasts more than one billion users, YouTube was listed as one of the top 10 sites that earned the most social shares for each event; in other words, you’ll want to be sure you host your video on the high-traffic site if you want to maximizes shares.

Out of the 17 events analyzed, more than 70 percent listed video as one of the top three content formats that earned the highest average shares – specifically the Super Bowl, the Academy Awards, the Grammys, Valentine’s Day, March Madness, Mother’s Day, Father’s Day, back to school, Thanksgiving, Black Friday/Cyber Monday, Christmas, and New Year’s Eve.

The medium was very popular on Twitter although in different forms, particularly Vines.

Another interesting insight? A majority of the most shared videos were either some sort of parody or a simple how-to, which is something to keep in mind when generating ideas.

A great example is BuzzFeed’s, “If Black Friday Were A Movie.”

2. Prepare for live events as much as possible

This type of content can earn your brand nearly 170 percent more shares than scheduled holidays.

Although you can’t anticipate everything that will happen, you’ll at least have dates for events like the Super Bowl and the Academy Awards – this will give you ample time for newsjacking and real-time publication (think Oreo’s “Dunk in the Dark”).

These types of events are a great way to increase overall awareness of your brand – and each post averaged more than 2,000 shares. Take a look at some additional insights below:

Publishers within the entertainment vertical tended to earn the most shares, including Billboard, Rolling Stone, and the Hollywood Reporter.

A majority of the most shared content types were either videos, lists, and why posts.

A bonus live event in 2016 you’ll want to start planning for within the next few months? The Summer Olympics – August 5 to August 21.

3. If you’re tight on time and resources, optimize your efforts for the end of the year

If you still haven’t outlined your content calendar for the year, you’re in luck: The average number of social shares per event went through the roof in Q4. The culprits? Holidays, specifically Halloween, Thanksgiving, and Christmas.

Here’s a breakdown of just how engaging festive posts can be to your target audience:

Listicles and ‘why’ posts were the most popular content formats for all three holidays.

The publishers that earned the most shares for the final quarter include BuzzFeed, the Huffington Post, and YouTube.

Other popular events to focus on during Q4 include the weekend of Black Friday/Cyber Monday and New Year’s Eve – each event averaged more than 1,200 shares per post.

So when should you start curating this content? Thanksgiving and Christmas production should begin around September while Halloween can start as early as July if you want to capitalize on the high social traction of videos. 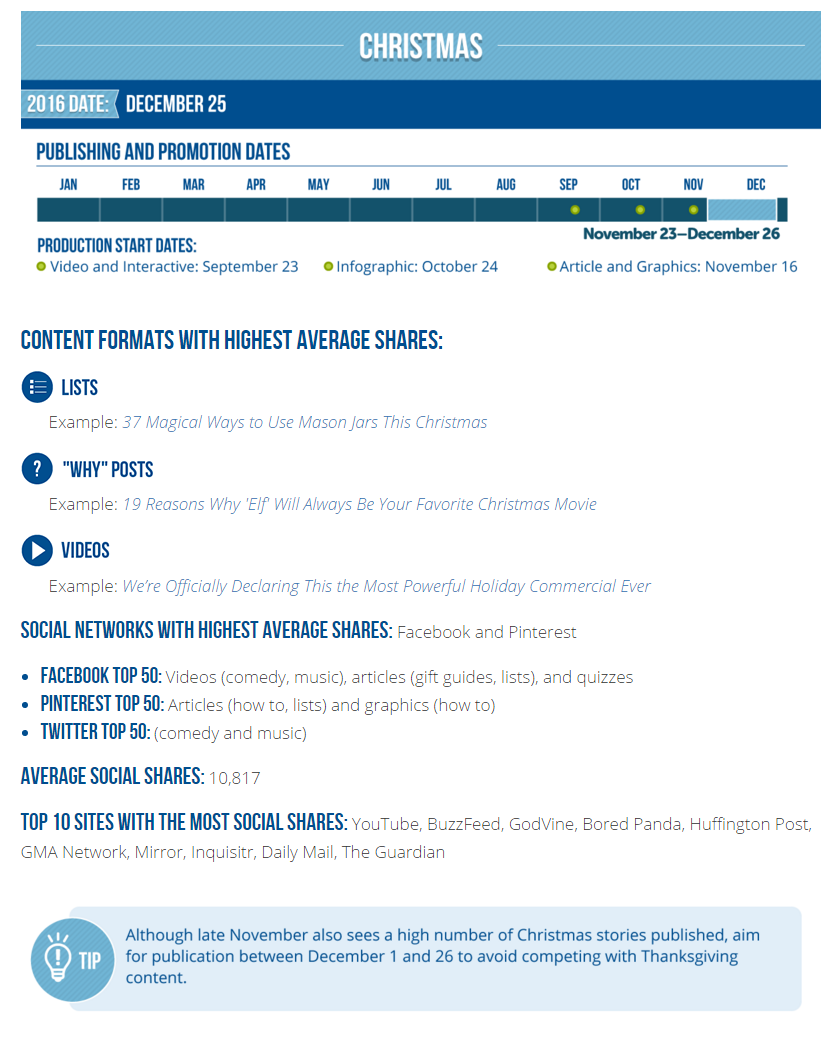 You can learn a lot from a year’s worth of highly shared content – and it’s particularly useful not only when you’re deciding what type of asset to produce but when outlining your outreach strategy, too.

Don’t know where to start? Download this content calendar that includes a list of timely marketing ideas – it’ll make it a lot easier for you to plan, implement, and iterate an effective strategy.