It’s no secret that Google is developing Android in part to promote many of its core services such as Gmail, Google Maps and YouTube. Yandex, often referred to as the “Google of Russia”, is now trying to break that influence with some free Android firmware that comes with its rival apps pre-installed.

Called Yandex.Kit, it offers an exclusive launcher based on Yandex.Shell and some of the company’s most prolific Android offerings, including Yandex.Maps, Yandex.Search and Yandex.Store – a marketplace with over 100,000 apps that’s designed to compete with the Google Play store. 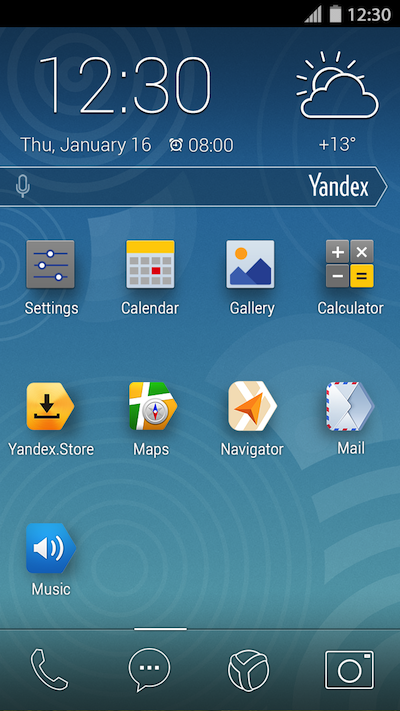 Huawei and Explay have thrown their support behind Yandex.Kit, agreeing to launch a handset each (Huawei Honor 3 Yandex and Explay Flame) with the firmware in Russia next month. Yandex is offering it on a “fee-free” basis, so there’s little risk for either OEM at this stage.

While Yandex appears to be focused on Russia for now, it hasn’t discounted interest from smartphone makers and carriers active in international markets. Companies targeting other regions will be offered a restricted version of Yandex.Kit, which includes the Yandex.Shell user interface, Yandex.Browser and Yandex.Store for now.

The idea is simple enough. If smartphones come with Yandex apps pre-installed, people are more likely to use them and forgo any third-party alternatives, including those developed by Google. For domestic carriers and OEMs, it’s a chance to differentiate with a software experience that customers in Russia will hopefully recognize and trust.