Yahoo Maktoob, the Middle Eastern arm of Yahoo, has acquired a license to use the technology behind the Arabic transliteration tool, Yamli.

Co-founded by Habib Haddad, the brains behind YallaStartup and currently CEO of Middle Eastern entrepreneurial platform Wamda, Yamli launched in 2007. It was the first online service of its kind, allowing Arabic speakers to interact in their native tongue, without the need for an Arabic keyboard. Users type Arabic words in Latin letters, and Yamli instantly transforms the text into the Arabic equivalent.

With the integration of Yamli into its existing services – Mail, Messenger, its forums and more, Yahoo is extending its reach: “Yahoo is in the space of digital content, and one of the biggest things for them is user generated content and engagement so by offering that technology to their users they’re going to unlock a new untapped pool of users who will be able to write in Arabic, versus in English letters,” Haddad says.

Not only does this bode well for Yahoo’s users, making it easier to use these products in Arabic, it of course bodes well for Yahoo itself. Haddad explains, “This means their end result will be real Arabic words, which means it’s more standardized. It’s better for many different things including discoverability, searchability and readability.”

The licensing acquisition means that Yahoo has paid for all of Yamli’s technologies, and its backend, which will be integrated into its properties. As for Yamli, Haddad tells us that users should not expect any changes, and the service will continue to operate as is.

Integration into Yahoo’s existing products will be seen in the coming months, but the very first use of Yamli’s technology can be seen in its new standalone product, ‘3arrebni‘ – which literally means ‘Arabize me’, serving a similar function as Yamli itself. 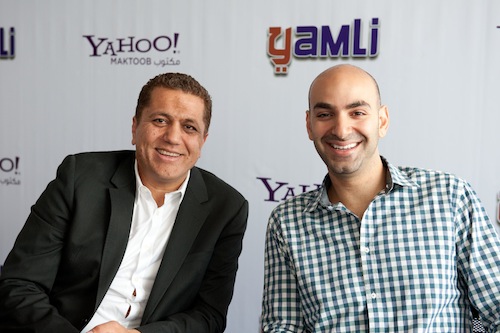 Yahoo has been one of the few foreign companies that has had its eye on the Middle East, starting with its 2009 acquisition of Maktoob. It is also one of a few parties focused on increasing the amount of Arabic content online, having most recently teamed up with BBC Arabic for its latest initiative. In that light, the interest in Yamli seems like the most natural of positions for Yahoo to take.

A pivot in Yamli’s business model

“After we launched, transliteration has gone, more or less mainstream,” Haddad says. “Google launched after us, Microsoft launched after them, so we proved that the market demand for this is huge.”

Yamli currently processes about 150 million words per month, for a total of 3.5 billion words. He puts the figures in context for us: “That’s equivalent to 12 million Wikipedia articles, or about 70,000 books.”

In addition to converting English text into Arabic, Yamli also has a built-in search engine, and the service makes it incredibly easy to keep up with all of your Arabic needs on the go, with its iOS app. A public API has also seen to it that Yamli has been integrated into a variety of Arabic websites.

As a company, however, Yamli is undergoing a significant shift, with the Yahoo deal representing the first milestone in the startup’s pivot

Yamli is now hard at work brokering deals with software and private companies. Haddad gives us an example, “Arabic names can be spelled in so many different variations, so if someone wants to search for that in an internal database, like blacklists for banks, unless you spell it exactly the same way, you can’t find it.” Companies can also use the service to optimize for SEO, and improve discoverability of their content online.

That’s where Yamli comes in. With its knowledge of all of the different variations, the technology makes it easy to find exactly what you’re looking for, thanks in large part to its  large, and dedicated, userbase. “Our users have been feeding the algorithm data,” Habib says, “It doesn’t rely only on math.”

While there have been few notable exits in the region since Maktoob’s, with the exception of LivingSocial’s acquisition of GoNabit, the Middle East’s potential as a relatively untapped market is not to be dismissed.

Haddad says, “I hope that this will create a domino effect by encouraging other private sector companies, like Yahoo, to start doing more deals with startups, to start trusting more startups, and doing it in a tangible way. It doesn’t have to be foreign companies, but also the local private sector companies. Yamli started with two co-founders, and we’ve been able to build this whole company. The more we see of these deals, the more we’ll be in a better situation in terms of the ecosystem flourishing.”

Yamli has only gone through one investment round in which it raised $125,000. “It was built completely from the bottom up,” Haddad says. Figures of the Yahoo licensing acquisition have not been disclosed.