WunWun, the startup that puts on-demand helpers at your service in New York City, has opened to the public and announced significant changes to its business model with the introduction of free delivery from any store in Manhattan. 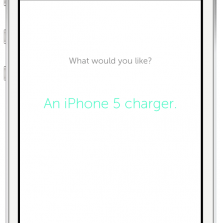 Customers request items through the iPhone app with a minimum purchase of $10 and WunWun will dispatch one of its helpers to get the items and bring them to you. Pickup and delivery requests that don’t involve a store will now cost $20. The WunWun app also has a new “Pick for me” feature that lets users defer the choice of store to the helper.

WunWun’s new pricing scheme is a bold one. Assuming it works, it’ll move the burden of cost onto vendors. The firm started building out its B2B relationships with merchants earlier this year through its Power program. With today’s news, the startup is also removing services like dog-walking, which used to be offered for $2 per 5 minutes of the helper’s time.

By going free, WunWun is moving its core business downstream from wealthy consumers toward the masses. Users with money to burn can still pay the extra fee for bespoke requests, while those on a budget can still enjoy the service’s convenience. Meanwhile, businesses gain the benefits of offering an on-demand service without having to invest in the logistics and infrastructure.

“We had to make a decision whether to be a rich person’s app or an app that can be part of every person’s life every single day. We took the every day part,” CEO Lee Hnetinka said.

Speaking of logistics, WunWun is going to have its hands full managing its helpers now that it’s offering free delivery. The firm has drastically ramped up the number of helpers it employs in preparation for the increase in order volume.

“We’re ready to see how this system works,” Hnetinka said, adding that building the infrastructure up over the past few months has definitely been a nightmare. “It will definitely be an interesting couple months.”

My only complaint is that it’s limited to New York at the moment (I want it now!). WunWun says it is working on coming to other cities, and, for the rest of us, it can’t arrive too soon.