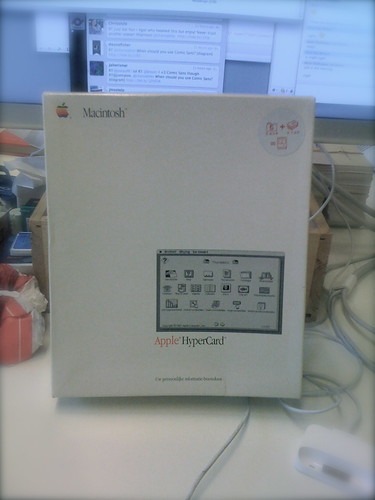 In 1990 I bought my first Apple computer: the Macintosh Plus ED. People at school thought I was crazy for buying a computer with that much memory. The Macs at school had 1mb memory, mine had 2,5mb.

Within a few weeks I started working with HyperCard and got completely addicted to it. HyperCard was basically the World Wide Web without the “World Wide” part. You could build ‘Stacks’ with ‘Cards’ that could link to each other by linking images and text. The language running all of this was HyperText and developing stuff was as simple as typing “go to card 3”.

People used HyperCard to build inventory systems, libraries and all sorts of applications that were shared using floppies. I used it at first to make animations and later I programmed my first applications that made semi-random drawings.

This morning, on my way to work, I noticed a bunch of books next to a trashcan. One of the books was the Apple HyperCard handbook. I just couldn’t leave it there.

Looking back I realize that HyperCard had a huge influence on the rest of my career. It gently introduced me to developing and the inner workings of applications and, later, websites.

If HyperCard would have stayed around a little bit longer I wonder how it would have affected the World Wide Web. It seems like such a logical step to make it Internet based, in hindsight.

So, what was the first language you started developing in?
Did you use HyperCard and HyperText too?
What did you built?

Let me know in the comments….