While for a moment Tumblr gave WordPress a run for its money, WordPress now powers nearly 73 million blogs (Tumblr has 51 million), and continues to expand its massive reach. But aside from new blogs popping up all over the place, a closer look at Technorati’s top 100 list reveals how WordPress is putting other platforms to shame in the pro space.

Three years ago, WordPress held the #1 spot, running 32% of the top 100 blogs. This year, the dominance is even greater, as the open source giant now provides (hosted & self-hosted) 49% of blogs on Technorati’s list, according to Royal Pingdom.

As a result, TypePad has decreased dramatically, from 16 to only 2 blogs on the top list. The proprietary Expression Engine and Bricolage also completely fell off the list, and Moveable type lost 5 sites. You can view all of the results in the chart below: 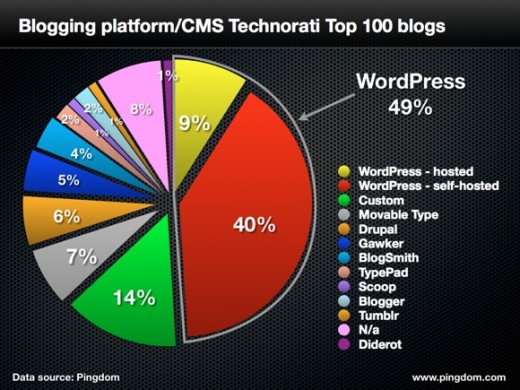 According to founding developer of WordPress Matt Mullenweg, much more growth is expected over the coming years:

The last few years we’ve really focused on both the usability and flexibility of WordPress, which has resulted in accelerating growth in both big and small sites. I expect even higher adoption among the largest sites and blogs over the next year.

For more, check out Royal Pingdom’s study via the link below: