I don’t know about you, but I can count the number of times I pick up a pen each week on, maybe, 3 fingers.

Birthday cards, signatures and perhaps the odd calendar reminder on the front of my fridge – that’s it. Everything else is keyboard-based. Handwriting is a dying art, which is where Lettrs hopes to carve a niche for itself.

It was back in December when it officially launched its new “cloud letter platform” – one that promises to revive and reinvent the concept of personal, handwritten letters by making them, well, social. And today it has launched its first foray into mobile via a native iOS app.

In the nuttiest of nutshells, the Web-based incarnation of Lettrs serves up a virtual writing desk to write your letter, with a slew of handwriting-esque fonts and paper-types to choose from. When you’re done, you can choose to deliver it digitally – email, Twitter, Facebook, or send as a physical letter.

Physical letters are dispatched from Lettrs’ base in the US, so it costs slightly more for non-US users. But, you can also print it out yourself and send if you’re so inclined.

The one thing you’ll notice thus far is that, well, this isn’t really handwriting. It’s just the illusion of pen and paper. If you can ignore that one glaring, obvious downside for now, then the essence of Lettrs is actually pretty sweet. And there is an additional ‘Preserve a Letter’ feature that lets you upload and save handwritten personal letters, in what it calls – somewhat metaphorically – a ‘shoebox’.

You can also display letters publicly via a user’s virtual ‘fridge’ (there’s those metaphors again), and explore thousands of personal and noteworthy letters – including historical writings from celebrities and public figures, and share them across the social sphere. Plus, you can even use the platform to ‘pen’ open public letters or petitions for supporting causes.

You can view the full promo video for yourself here.

Now, Lettrs is taking its cloud-based writing platform to mobile, and is promising to transform your iPhone into a personal writing desk and post office.

Costing a cool $2.99 or your local currency equivalent, Lettrs for iOS mimics much of the functionality of the Web-based version, letting you create and deliver personal letters anywhere in the world. It also has a built-in spell-check feature that corrects your spelling as you go-along.

In terms of costs, well, it will be between $2 and $6 depending on the specifics of the letter, while digitally delivered letters shall remain free

Users can also tap their iPhone camera to upload a handwritten letter and deliver it via the lettrs system, though you will need to ensure this is done in clear lighting sans shadows.

Indeed, the iPhone app doesn’t just mimic the Web-based version. The mobile incarnation also has a 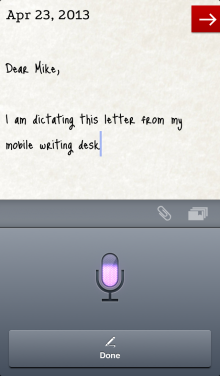 microphone feature, letting users dictate directly into the app which is then converted to text – this feature is only enabled on iPhone 4S and iPhone 5.

Fittingly, the new Lettrs app was unveiled earlier today at Postal Vision 2020/3.0, in Washington, DC, an event focusing on reinventing the US postal system. At the conference, lettrs co-founder and CEO Drew Bartkiewicz presented the lettrs iPhone app, before moderating a panel of students in a discussion on the future of communications.

“The introduction of the lettrs mobile app is another major step toward our goal of making letter-writing relevant and easily accessible for anyone anywhere, at any time,” says Bartkiewicz.

“In an age when most social media missives are quick hits without a great deal of thought behind them, I feel very strongly that people are hungry for more meaningful and deliberate communication in their lives. The lettrs mobile app is all about making the process of letter writing much more convenient, purposeful and lasting.”

From now through to Mother’s Day (in the US) on May 12, Lettrs is offering users five free physical-format letters anywhere in the world, so get in quick if you want to try this out for yourself.

There are other similar apps out there – Inkly lets you buy and send handwritten greetings cards directly from your iPhone. But Lettrs takes things to a whole new level.

While Lettrs is optimized for the smaller-screen form factors of the iPhone and iPod touch, an iPad incarnation is on the way. And Android users, you will be catered for too.

Lettrs is available to download for iPhone and iPod touch now, costing $2.99.