There are times when we see a team and we know that the product that they’re crafting is going to be great. When startup vets Bill Lee and Mike Belshe are behind a project, it would be one of those times. Their latest invention is an app called Twist for iOS, and it’s looking to solve the pain point of having to wait on someone, or making someone wait on you.

Twist is a little bit like Glympse, in that it allows you to tell someone where you are. But instead of just showing them a location on a map, Twist will figure out exactly how long it’s going to take for them to get to the intended destination, whether that be via car, on foot, on bike or what have you. There’s a certain level of genius going on behind the scenes, and I have to say that it’s got me hooked on the app already.

For a walkthrough, it works like this – I can create a Twist, and set it to begin when I leave my current location, ending when I meet my wife for dinner. She’ll get a notification of my departure, via SMS, email or the Twist app, and Twist has gone to work calculating via GPS and traffic exactly how long it will take for me to reach our date.

The beauty of the system is something that I glossed over a moment ago – It only starts when you leave, and it ends automatically when you’re within 1 minute of your destination. So really, once you’ve taken a moment to plot your goal, the rest requires zero input from you. Twist will even update as traffic flow changes, because the entire goal is to make sure that you’re never going to keep someone waiting.

Lee tells me that the app was really something that he wanted to create to solve a pain point. As an entrepreneur, a guy with a few exits under his belt and an investor, he spends a load of time in meetings. But the annoyance is that he spends unnecessary time waiting for meetings. With Twist, it’s possible for this to never be a hassle again.

Now let’s take things a step deeper. Twist is meant to integrate fully with your phone. That means that you can use Calendar locations as Twist destinations, you can use location sharing to keep track of friends and loved ones, it gives you a private social experience (akin to Path) with pictures and chats and it does all this while merely sipping battery.

I spent some time talking to Lee about the app, and what it means to him. First off, the big question – What if Facebook or Google does it? Because for both companies, it seems like something that’s definitely in the middle of their wheelhouse.

” Twist is inherently private. It’s designed to only be shared specifically. I don’t use Facebook because I feel like there are too many gaps for privacy.”

Lee also sees Twist as being in the forefront of the next major move for apps. Instead of the Social/Mobile/Local dance that everyone seems to be doing lately, he posits that Twist is about “when”, and it’s the first app to really focus on that.

Now, back to the team. Lee’s CV reads like the stuff of Silicon Valley legend. He’s lead companies like RemarQ, Kelkea and Social Concepts to big acquisitions. He’s an active investor with money in Tesla Motors, Posterous, SpaceX, TweetDeck and Yammer and he’s gathered 12 stars to work along with him. 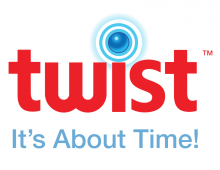 Lee’s co-founder and CTO Mike Belshe is a guy who focuses on making things faster. He was a member of Google’s Chrome team, the founder of the SPDY project and has over 15 years of engineering management experience behind him at companies like Microsoft, Critical Path and Netscape.

Twist is launching version 1.0 of its app today with a $6 million Series A and it’s a round with some impressive names behind it. eBay co-founder Jeff Skoll is leading it, with Lee himself chipping in and Bridgescale Partners rounding out the participants.

Every single one of us has dealt with the frustration of someone running late, or making someone wait for us. With Twist, we finally have a better option than a simple tweet, text or Facebook update of “be there in 10”. It’s iOS only for now, as Lee tells me that the team wants to make sure that they’ve got the app nailed down on one platform before moving to another. Oh, and it’s free, so there’s nothing stopping you from clicking the link below to grab a copy for yourself.

➤ Twist, via the App Store