According to Drippler’s CTO Ronen Yacobi, detecting which Android model and version you are using is quite a challenge from a technical perspective, especially in such a fragmented environment. Yet, this is exactly what Drippler has to do.

Also available on the Web, Drippler uses its free Android apps to provide mobile users with personalized news (‘Drips’) about their device, including tips, software updates, app recommendations and support.

As for the news themselves, they come from different sources, which Dripplr aggregates to create a personalized dashboard, email — and app interface. Here’s what it looks like:

Drippler is also a good example of what makes the force of Israel as a “startup nation.” Its two co-founders Matan Talmi and Dotan Galron and Yacobi himself “all served together in an IDF’s elite technological unit, and later held various positions at hi-tech companies,” Drippler’s CTO tells us. 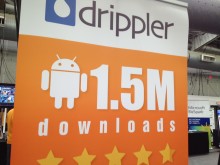 As for the product itself, Drippler’s ambition is to help users make the most of their devices, and it seems the message hit home. As we mentioned earlier, it led 1.5m people to download the app, which currently has a five-star rating on Google Play.