Mobile messaging is the hot topic of this year — thanks to a few big acquisitions — but what can help a contender from standing out from the rest of the field? How about a privacy button that permanently removes all traces of a conversation with a single click?

That’s the formula behind Wiper, a new messaging app for iOS and Android that takes the simple aesthetics of WhatsApp and Telegram and adds a button that, quite literally, wipes messages from the sender’s phone, recipient’s phone and the company’s own servers in seconds.

“Whether it’s WhatsApp, SMS, Facebook, Google or email providers, we’ve found that the more we look at communications companies, they really obscure privacy policies about our data, such as what is done with information, and how long it is held. It is also impossible to control what the recipient of messages is doing too,” says Wiper CEO and co-founder Manlio Carrelli.

In addition to messaging, Wiper also offers encrypted HD voice calling, and will tell you when the other person takes a screenshot of your conversation. Photo sharing is supported inside conversations, images can be forwarded to others, though the sender is informed when that happens, and is told how many people their image was shared with.

This combination of notifications and wiping is aimed at giving users “transparency around what people are doing with your information so that you can make decisions about who you talk to,” Carrelli explains.

The app is quite basic at this point, but Carrelli says there are plans to add new features — including group chat and a web-based service — soon. He also teases that the Wiper team has “something the industry hasn’t seen yet” — which is quite the statement given that messaging apps are pretty much the same these days in terms of features.

Wiper has just raised a $2 million round from sole investor Michael Choupak, who founded cloud-based email startup Intermedia and sold it for $120 million in 2011. Choupak also provided a $500,000 seed round to get Wiper off the ground in February.

The app has been live on Google Play and the App Store for a couple of weeks and Carrelli, who was formerly CMO and head of product strategy at Intermedia, says it has drawn particular attention from the college demographic which appreciates its simplicity and the ease in which data is wiped. 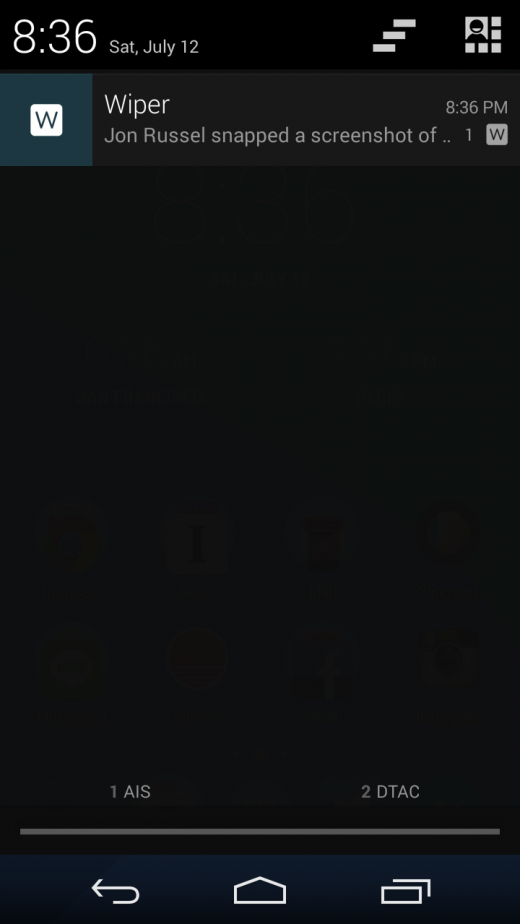 A good friend and I downloaded the app and road tested it this past weekend, using it instead of our to-go app — which happens to be Line.

The wiper feature (and its windscreen wiping animation) is neat, and I think that there is great value in an app that boasts strong privacy and is easy to use. However, a slight delay in the loading of messages is noticeable (although not critical to usage), coupled with a lack of video calling, group messaging and a basic user interface isn’t the experience we are used to in a messaging app.

Wiper is a good effort, I’ll admit that, but getting my network to switch over to yet another messaging app just isn’t going to happen at this point. For example, even Telegram, which has got more than 50 million downloads to date is barely used by a handful of people I know.

It’s good that Wiper has plans to add more features and release a web app soon, both of which are much needed in my opinion. While it won’t be joining my list of go-to apps just yet, Wiper is interesting enough that I’ll keep my eyes on its progress.

➤ Wiper for iOS and Android

Image via Vitaly Maksimchuk via Shutterstock