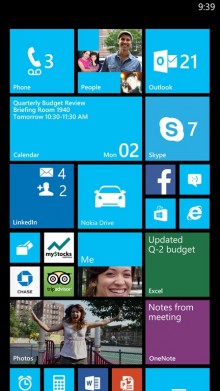 The platform will now support “jumbo-sized” Start screens and show up to six Live Tiles on each row, rather than the four that’s currently available. Microsoft also scaled some of its pre-installed apps such as email, Photos, People, Music and Videos to take advantage of the space.

GDR3, or General Distribution Release 3, also supports Qualcomm’s beefy 8794 quad-core processor, as well as a new software feature called Driving Mode; when connected with a Bluetooth device, this limits the number of notifications on the lock screen – texts calls, status alerts and the like – while you’re out on the road.

The third update also brings over Mobile Accessibility, which is a catalog of apps designed to help blind and visually impaired users carry out everyday tasks on their handset. It also includes a new rotation lock feature, which will keep the screen in-check while you’re lying sideways in bed or on the sofa.

The software update will be available on existing Windows Phone 8 handsets “over the next several months,” according to Microsoft.