Strangely, at the press conference, press wasn’t allowed to video Zuck, although photos and audio were allowed so I recorded his answer in the video below.

He said he had been too busy with their recent changes to think about this, to which I replied ‘I’ll only take 10%.’ 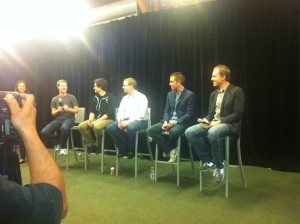 Was it just a crazy question? Robert Scoble who makes a living from sharing thoughts and opinion on social networks, says most of the engagement comes on building audiences on platforms like Twitter, Facebook and Google + and not from the destination site.

As you can see in the video below Robert agrees with me that potentially we could be paid to Facebook. I don’t think this would be a good feature for everyone (some people just like to stay in touch with their friends) but for many people who are sharing more of their interestes and passions it will be a great incentive for content creators to use the Facebook platform instead of YouTube or others to create and monetize their content.