With Google’s acquisition of Nest now complete, your home could be getting a whole lot smarter over the next five years. Until then, however, you’ll probably have to settle for the simpler things in life, such as controlling your home appliances remotely.

Indeed, former The Apprentice contestant Leon Doyle has come a long way since his appearance on the hit BBC entrepreneur show back in 2011. He’s now CEO of his own startup called WiFi Plug, a company specializing in devices that let you control your home electrical devices remotely via the gift of mobile apps.

Sure, the notion is nothing new – Belkin already caters for this market with the WeMo Switch, as do others. But Doyle’s setting out to iterate on the premise with a new take on what’s possible with the technology.

The WiFi Plug actually launched last year, but the previous incarnation was more complex to install. The guys working behind the scenes have released an update to make things easier to set-up – so we grabbed one of the units to see what it can and can’t do.

Out of the box you get a single WiFi Plug and mini instruction booklet (which isn’t that helpful, but more on that later). Now, given this is a UK-based company, it’s configured for UK electrical outlets – but the company does ship globally. For UK consumers, the WiFi Plug will set you back £39.99, which is roughly $67 (USD) or €49 (EUR).

However, obviously a UK-configured WiFi Plug will be no good if you’re in Macedonia or Missouri, which is why you can pay an extra £7 ($12/€9) to have the plug face converted for your market. Or you could just buy an adapter on eBay for a buck. The choice is yours.

You’ll then need to download the Android or iOS app, which lets you configure the plug for your device. Be careful that the apps you install are indeed the ones linked here – for some bizarre reason, the WiFi Plug website doesn’t include links to the apps in any obvious location (though they are on there somewhere), so you’ll have to manually search for them. That in itself is no disaster, but it has two older apps still live on Google Play and the App Store too, which basically won’t work with the latest version of the device.

Now, the initial set-up process is slightly different between iOS and Android. For both, however, you will have to press the button in the middle of the WiFi Plug for around ten seconds – until the blue LED flashes quickly. This is it emitting its WiFi signal that enables you to hook it up to the network.

Now, if you’re using an iPhone, iPad or iPod touch, you will have to log-in to the app first (on your home network). Then, head to settings on your device (not within the app) and connect to the network that says ‘PTS-WiFi’, and return to the app. You’ll need to enter your router’s password, hit ‘Configuration’ and give it a name, such as ‘Lamp’ or ‘Heater’, depending on what appliance you intend to use it with. You can easily edit this name later.

On Android, the process is similar – except you don’t have to log-in to the ‘PTS-WiFi’ network. Android devices automatically sync with the plug, though you will still have to enter your router password and hit ‘Configuration’.

*Important point – On Android, ensure you disable 3G/4G when you’re setting the WiFi Plug up for the first time. If you don’t, the app may be prevented from connecting to the plug’s WiFi signal. This is what happened with myself, though I’m told it shouldn’t make a difference. At any rate, once it’s installed, that should be the last time you have to worry about this.

I also found the bundled instructions weren’t detailed enough, and I actually had to fiddle quite a bit with the settings and configuration to get this to actually work. I would often get error messages and connection timeouts – but I finally managed to get it to work.

Though you can only ‘bind’ one plug to one device (i.e. iPad, iPhone or Android), you can log-in with your same credentials on up to ten different devices without having to do anything beyond installing the app and signing in with your username and password.

Now, with an appliance (kettle, heater, mobile phone – whatever) in your WiFi Plug, you can turn it on or off remotely, over 3G, 4G or WiFi. You can also configure multiple timers, so that a heater, for example, turns on/off at set times throughout a day, with a ‘repeat’ function enabling you to arrange this for the same days every week.

Of course, if you only have one WiFi Plug you can only control one home appliance at a time, so you would need to buy multiple WiFi Plugs to control multiple appliances. 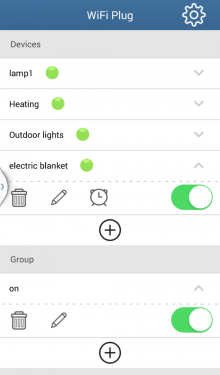 It could get pretty expensive, but if you need to control your electrical outlets from afar, well, it’s not the worst idea. If you do go down this route, your account could end up looking like this.

As noted already, while the setting up process for the WiFi Plug in theory is very simple, the accompanying instructions aren’t great. We’re told that future shipments will include a clearer manual.

However, there are many things to be positive about once you get things up and running. For example, the WiFi Plug is only 6cm wide, which means you can plug into a double wall-socket and not encroach on the second socket. The Belkin WeMo Switch is a bit thicker and may hinder access to a plug next to it.

Moreover, given that you can control the WiFi Plug from multiple mobile devices (using the same log-in details), this gives you more control over how you manage your plugs. You could configure things from your iPad on WiFi at work, and then from your Android phone at the train station using 3G.

Company founder Doyle says that they have some pretty interesting developments on the horizon, including allowing users to automatically switch their plugs on as soon as they get within a set range of their home, using geo-fencing technology.

The WiFi Plug is a good piece of kit, and has a lot of potential, though be prepared for some teething problems when you’re first setting up.