On April 30, Kate Jackson had the enterprise high.

At The Next Women European Pitch event in central London, Kate was one of several female entrepreneurs pitching her startup to a board of investors. Dressed in jeans and Converse, Kate’s was the evening’s final pitch. But everything about it-the crisp delivery, no-nonsense business plan, and energy that kept her walking on air-let us all know who’d won before the scores came back.

“We signed a partnership deal with Time Out London just before this,” Kate said halfway through. “So forgive me if I’m still jumping up and down.”

“We” is TableCrowd-a “meet and eat” startup launched in 2011 that has developed a swift presence in London’s Tech City. It connects strangers over a tried-and-true pastime-eating. New users log in via their Facebook, Twitter, LinkedIn or email accounts, then make a profile and browse tables that other users have already established. Created in house using Ruby on Rails, Mongo DB, redis and elasticsearch, TableCrowd’s technology invites relevant diners from its database and automatically updates each booking size based on who joins each table.

Users can invite you to join their tables, and vice versa. Diners can also join “crowds” ranging from “Escape the City” (a group for lawyers, bankers and such seeking new careers) to “Hungry Romantics” (described as an “alternative to online dating, speed dating events or hitting the bars and clubs in the quest to meet new people”).

Is it a “find friends” site for adults? A dating site disguised as the former? Kate says TableCrowd’s whatever diners make of it, and that they determine how TableCrowd can best fulfill their social needs on personal or professional levels.

1. Increase in career changes; a job for life is now a thing of the past (the average worker now has 10 jobs in a lifetime).

2. Increase in romantic relationships; a partner for life is a thing of the past (marriages are down, divorces are up).

3. Increase in population mobility for work or personal choice.”

This, Kate says, is where TableCrowd fills a market gap. It’s a platform that turns online connections into real life relationships. In this globalized era of more divorces, transnational careers, and personal mobility, many adults-especially in urban areas-don’t settle for traditional social scenes anymore.

“Networking has done a full circle,” says Kate. “Pre-2004 (before MySpace and Facebook), the world was predominantly offline. Today, around 32 million people in the UK now have an online profile. The trend we’re seeing now is online communities moving towards offline activities for their members.”

These members are willing to meet new people, but don’t have time to meet potential new dates or friends with no shared interests or connection. The chance to wine and dine over shared passions in groups erases pressure to perform one-on-one, and gives more room to spark a genuine platonic or romantic connection. 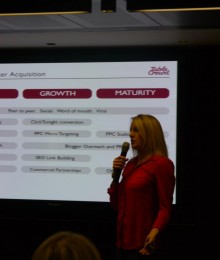 “When meeting new people, it’s good to have a focus and some ice breakers to put people at ease,” explains Kate. “Dining out does just that. You have the combination of the food, restaurant and ambiance as the first level of conversation, which allows people to become comfortable with each other before the conversation goes deeper.”

TableCrowd diners-myself included-can vouch that the camaraderie created by food, plus dining with those who share similar interests, fosters new connections. One diner, Mindy, joined her first table on a colleague’s recommendation. New to London, she’s found TableCrowd to be a powerful tool for knowing who to meet and where to dine throughout the UK Capital.

“To be honest, the one thing I took away from the event was this: [the ability] to network with people who had the same goal as me –to network and talk about our passions,” says Young. “There wasn’t anybody at the event that I did not want to speak to; there were journalists, PRs, founders, bloggers. I’ve taken some valuable contacts away from that event and reconnected with someone who I had worked with for LLB. I also secured an opportunity for one of my clients; without [TableCrowd], that potentially might not have happened.”

Even beyond dating sites, TableCrowd’s not the first network to take social offline. Post-911, New Yorker Scott Heiferman had his ideas about social shaken. Previously convinced that knowing his neighbors was unimportant in the online age, he spoke with so many following the Twin Tower collapse that he asked himself a question: “Could we use the internet to get off the internet — and grow local communities?”

His idea evolved into Meetup-a global facilitator of social groups based on shared interests that’s now 10 million strong. From new moms to urban-dwelling hikers, users select personal interests, then receive emails from Meetup with local suggestions for groups they might enjoy. They meet like-minded strangers online, then connect in person.

Like Heiferman, Kate eschews the idea that the Internet creates false intimacy, or that those who go online can’t turn passive connections into personal relationships.

“Last week, I was speaking to a top level executive who acknowledged that he hadn’t met a high percentage of his 500+ Linkedin connections and [that] doing so would probably unlock many opportunities,” she explains. “He was planning to put some money behind the bar and invite them all for a drink!

“With online social networking, you can’t be passive or you simply have no presence! Cut to the chase and use a site like TableCrowd to get offline quickly!”

“I believe that [social networks] provide an expansive set of opportunities that people previously didn’t have,” adds Stephen Jackson, TableCrowd co-founder and brother of Kate. “They facilitate networking and relationships where geography was previously a boundary, regardless of whether this is internationally or merely when someone may not be able to escape their home or work.

“Opening or maintaining these relationships then leads to strengthening through face-to-face meeting, whether for friendship, dating, business or any combination. TableCrowd makes those next steps easier.”

The Time Out partnership will take TableCrowd to new heights in London, as will their recent website re-launch using responsive design. Their technology’s enabled in 3,000 UK restaurants, and Kate told me exclusively that a Cape Town company’s keen to take the concept there. But she and Stephen aim to perfect their formula locally before taking the idea abroad-although some issues can’t be avoided.

“[At one dinner], one of the diners felt another was holding too much of the conversation and made his thoughts known in no uncertain terms,” Stephen laughs. “There have been a few others who didn’t really want to go home and failed to turn up for work the next morning, but generally it’s all good fun.

“We’d also love to help bill splitting get slicker-but even with close friends, there are sometimes issues here!”