There are still a few hours left to contribute to the BLEduino Kickstarter campaign, but the operation is already a tremendous success. Not only did it reach its funding goal in fifty-two hours, but it has now exceeded its initial target by more than 430 percent.

This is even more impressive when you take into account that this was the first hardware crowdfunding campaign to ever come out of Puerto Rico. It is the brainchild of Caguas-based startup Kytelabs, whose three co-founders are on a mission to turn their island into a great home for hackers and makers.

When Jonathan Gonzalez, Ramon Gonzalez and Angel Viera decided to create an Arduino-compatible board that would support Bluetooth 4.0, they were essentially scratching their own itch. While working on a smart umbrella prototype earlier this year, they realized how handy it would be to rely on ready-to-use boards.

Although they soon discovered some Bluetooth-enabled boards in the market, they also noticed that these had several flaws. As a matter of fact, the model they stumbled upon was so small that its capacities and compatibility were limited. In addition, it was still quite hard for the average person to make it work.

This helped them define specs for their own project: BLEduino would have to be small enough for all sorts of projects, but still compatible with larger Arduino shields. It would also have to be affordable and easy to connect, even for newbies.

Kytelabs’ solution to size issues is actually a separate component that its founders call the “Shield-Shield.” The team sounds quite proud of this small piece of hardware, which they say offer the wide Arduino compatibility that their competitors promise but often lack. Here’s the explanation they posted on Kickstarter: 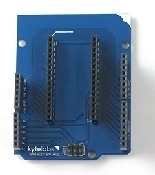 “For a board to be fully compatible, you would need it to support both the old Arduino UNO pin layout and the new Arduino Leonardo pin layout. Not only that, the boards would have to support 5V logic (which we do). The layout problem is solved by our Shield-Shield by allowing you to switch between the old and new pin layout by just flipping a switch. In other words, the same Shield-Shield is basically backwards and forwards compatible, allowing it to work with nearly all Arduino shields.”

The Shield-Shield is also quite cheap, and Kickstarter backers will get one for free if they opt for the $49 pledge (vs. $35 for the BLEduino-only reward).

One of the reasons why BLEduino is easy to connect is that it uses BLE, a subset of Bluetooth 4.0, which has many advantages over Bluetooth 2.0. For instance, pairing is only a one-off operation, and the fact that it is low-energy makes it great for passive uses. Compared to wi-fi, using Bluetooth also means that no router is necessary.

As usual with hardware components, BLEduino can have so many applications that it would be pointless to list them all. Still, Kytelabs’ Kickstarter video does a good job at showing potential hacks, from connected LEDs and LCDs to teleguided robots.

Since hardware can be quite intimidating for beginners, Kytelabs’ team has used its software developing skills to create an iPhone app with pre-set modes. While Android doesn’t have official support for Bluetooth 4.0, Kytelabs has already promised that it will also launch its app on Google Play as soon as it does.

This app-based approach is likely one of the key elements of BLEduino’s appeal and accessibility. It is worth noting that the app is open source, and Kytelabs will release its code in August once design details are finalized.

To broaden BLEduino’s reach, the team is also hopeful that the product will one day be distributed in the Arduino Store, which will depend on official approval and the payment of a licensing fee.

In the meantime, the first clients to put their hands on the BLEduinos will be its Kickstarter backers, to whom they should start shipping in November after Kytelabs completes quality assurance and packaging. Since the startup is familiar with the pain of international shipping costs, it decided to offer a flat shipping rate to all non-US clients, even if it may have a negative impact on its margin.

“The main reason we did Kickstarter was to motivate Puerto Ricans to do their own thing in hardware,”Jonathan Gonzalez tells TNW. While the team doesn’t expect to make profits from its campaign, it has also been keeping expenses impressively low. It has only spent $1,500 over the last six months, despite the fact that it needed to buy tools and import components.

This was only possible thanks to engineering company EngiWorks, which gave Kytelabs the free office space it needed to design and assemble its prototypes. For instance, the soldering work is done on-site by Angel, who is in charge of most of the startup’s hardware tasks.

EngiWorks is not the only Puerto Rican entity to support BLEduino, and Kytelabs’ founders were surprised to see how many of their Kickstarter backers come from Puerto Rico – around 25 percent. This share was even bigger at the beginning of the campaign, although most of these early backers made donations rather than try to pre-buy a BLEduino board.

“We were very surprised by the local support we got, because we never saw demand for [hardware] here,” Jonathan says. He still wonders how much of this goodwill has to do with the content of Kytelabs’ work: “Some people even wanted to send money orders after hearing about us, because they didn’t trust the Internet for payments,” he laughs.

Conversely, he and his co-founders were quite thrilled by the international support the campaign has received. According to Kytelabs, it has attracted contributions from open hardware fans from over 50 countries – which means quite a lot in terms of putting Puerto Rico on the map.

Puerto Rico, a place for hackers and makers?

Working on BLEduino from Puerto Rico had its pros and cons. While it helped the team keep many expenses low, the lack of an active hardware community also meant that all components had to be imported. Still, Kytelabs’ initiative is helping many hardware and startup aficionados come out of the woodwork.

“The Facebook community for hardware in Puerto Rico has grown a lot, and we get many emails these days. Even our friends take what we do more seriously, and it is having an impact on the image of entrepreneurship in general,” Jonathan explains.

Hardware knowledge is not uncommon among Puerto Rican techies. All three Kytelabs founders studied at the University of Puerto Rico, Managuez, where they say 70 percent of the Computer Engineering degree focuses on hardware. Ironically, they also report that Arduino has been outlawed for student work, as professors deemed that it made things “too easy.”

Because of this ambivalence, Angel, Jonathan and Ramon disagree on whether their education is directly responsible for their achievements. On one hand, Ramon notes that it was during their studies that they respectively developed custom design projects such as the Pyrobot and the rotary SWORD display. On the other hand, he and his co-founders explain that they learned a lot by themselves.

Jonathan points out that fellow students who didn’t do extra work and didn’t show personal interest in hardware projects would be unprepared to join startups like Kytelabs, whose team has the specificity to be able to combine hardware and software.

As we noted in a previous post on Puerto Rico’s nascent tech ecosystem, launching startups after or before graduating is still new on the island, where computer science graduates often take job offers from large corporations in the continental U.S.

However, Kytelabs’ story shows that things have changed. According to Ramphis Castro from Startups of Puerto Rico, it was the first team that attempted to create a startup straight out of school, and it won’t be the last. “The community has enabled this to now be a real option for students on the island,” Ramphis predicts, in reference to the many initiatives that have blossomed in Puerto Rico.

This is why Kytelabs’ example is so important for the local economy; by becoming role models, its founders can inspire others to follow the same path. They have already contacted their former professors to offer some of their time and will soon start giving presentations on lean startups, customer development and crowdfunding to computer engineering students, while becoming mentors to high school students.

Beyond startups and entrepreneurship, Kytelabs’ ambition is to round up all hackers and makers. “There are tons of makers in Puerto Rico; they just don’t know it yet, or they don’t know there are others like them,” Jonathan says.

To acknowledge this talent, the team is planning to add new events to Puerto Rico’s increasingly busy schedule, such as a MakerFaire and a BLEduino-focused hackathon. It is also hoping to get public support for these initiatives, as Puerto Rico’s government is showing a keen interest in the local tech scene.

This preoccupation was made clear last June during the first edition of Puerto Rico Tech Summit, which discussed how governments can embrace technologies. The event also included a dedicated hackathon, which Kytelabs’ team won thanks to Digidoc, an e-signature solution for government agencies.

Turning this prototype into a product may well be the next item on the startup’s roadmap. However, it will have to wait until the team is done shipping BLEduinos and other rewards to its many Kickstarter backers all over the world.