When it first launched, one of Fancy’s main aims was to create an online database of… well everything. The visual cataloguing service has gone much further than its original vision, and has evolved into an e-commerce platform in its own right.

Fancy hasn’t been able to avoid the obvious comparisons to Pinterest, but looking at the actual statistics, while Pinterest is doing an impressive job of driving traffic, it would appear that Fancy’s users are far more engaged.

While Pinterest’s 11 million users have generated over 32 million posts, Fancy with just 250,000 registered users has managed to generate 16.7 million posts. Fancy users are generating 22 times more content than Pinterest users. Breaking it down, on average, every Fancy user is creating 66 posts, while on Pinterest the number drops drastically to 3.

Volume isn’t the only advantage Fancy has over Pinterest. Not only is the purchasing process more streamlined on Fancy, the site is also doing a pretty good job of generating investments for its users. Jake Frey, a student studying industrial design can attest to that fact. 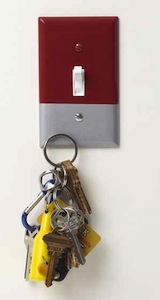 Jake shared his combo magnetic light switch/key holder cover on Fancy and in a matter of days had received hundreds of purchases. Within one week, an angel investor offered Jake $250,000 to begin mass production.

Speaking about the experience, Jake said, “With sites like Pinterest or Tumblr, stuff gets a lot of attention, but nothing really comes of it. With Fancy, it went from an image to a real business.”

Fancy would prefer to think of itself as a competitor to Amazon rather than Pinterest. While users can ‘collect’ and share products and services, just like on Pinterest, Fancy is a marketplace unto itself, enabling the purchase of just about anything from clothes and tickets, to booking hotel rooms.

Merchants who claim their products on Fancy have a fully functional e-commerce platform waiting for them. They can manage inventory, calculate shipping, print shipping labels and more, right from within Fancy.

Special deals are also being offered through the site, and to date, Fancy users have unlocked over 250,000 brand discounts.

Fancy is also innovating its own e-commerce model to boot. The site offers a reverse group-buying feature, where customers create the demand for an item, and then retailers can decide whether or not they want to offer a group discount.

Of course Fancy has a long way to go before it can get up to speed with the e-commerce giant that is Amazon, but it has one distinct advantage – its social edge.

The site brings a little bit of that impulse buying that we all do at the cash register into the online world. Fancy’s users are engaged – they’re sharing and discovering content, driving sales in a way that we haven’t seen on Amazon, and even generating investments –  that could be what truly sets it apart.

What do you think? Is Fancy’s e-commerce platform the next big thing? Let us know in the comments.