In short, it set the stage for federal regulation of healthcare apps, suggesting that some apps — particularly those that diagnose and treat medical conditions — should be subject to rules and regulation akin to those that preface the release of medical devices. While those that treat wellness, such as eating habits and exercise regimens, would largely avoid restriction, their more technical counterparts would be subject to costly and extensive oversight.

Unsurprisingly, this particular sector of the technology market is on an upward swing. According to Health IT Now, a coalition dedicated to the spread of healthcare IT,  the App Store saw a 250% increase in available healthcare apps between 2010 and 2011. More significantly, by 2015, 500 million smartphone users are expected to have such apps on their phones. This is due, naturally, to the liberty harvested by the current technology landscape.

For the development community, which strives within a highly competitive and innovative market, strict regulation is both daunting and discouraging. To date, bringing a medical product to market through the FDA requires an additional 72 months at an average cost of $75 million — approximately 77% of the cost. As Joel White, executive director of Health IT Now explained, “Just for context, a 2010 report prepared by Stanford University indicated that the time elapsed from first communication with FDA to final clearance was 31 months; apps have several life cycles in that time.”

That’s not, White explained, to say the debate going forward will revolve around whether or not medical apps should be regulated. As the FDA agrees, medical apps like spreadsheets or information management software, along with those that address general wellness issues, should not be subject to regulation, as they do not directly dictate the well-being of their users. On the other hand, there are those, White said, that “interact with human physiology. When devices touch the skin a considerable variable is introduced into the equation and there is a risk that the unpredictable differences from one person’s body to another may cause an application to no longer produce results reliably; that’s a patient safety concern that the FDA should be involved in regulating.” 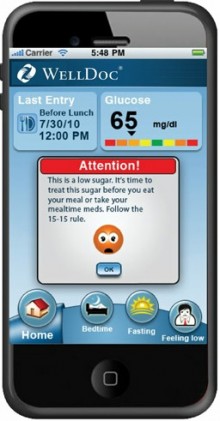 These apps may span from those that allow doctors to remotely access patient health readings to those that take blood pressure readings and monitor pulses. Some such manufacturers, like WellDoc, which developed DiabetesManager, a mobile for real-time feedback and clinical decision in type 2 diabetes, expect such regulation and take the necessary steps to seek approval on standards of medical devices.

“Although this process may extend product development timelines as compared to common health and wellness apps, WellDoc believes that this is critical in ensuring consistent efficacy, safety and over product quality,” said Demir Bingol, vice president of WellDoc. Others, like producers of imaging scan readers for devices, were entirely caught off guard by the regulations.

The push, then, is for the dialogue surrounding the regulation. To start, the Draft Guidance is crippled with ambiguities, with concerns stretching from the general — the pace of technological advancement and the FDA’s ability to adjust its regulation — to the specific: the distinction between what’s a mobile medical app and what’s a web-based app; cross-app integration and the security issues that could arise; whether the FDA should regulate intended use, user risks, or a combination of the two. This isn’t to mention the rapid updates that would take place within apps — would those changes, too, be subject to repeated regulatory procedures? And would the FDA always be the agency responsible? Even the Institute of Medicine, an arm of the National Academy of Sciences, said the FDA may be the right agency at some times and not other times.

“There are a lot of agencies that have at least some regulatory jurisdiction here: FDA, FCC, FTC, CMS, ONC all have a little piece of the pie,” White explained. For example, the Office of the National Coordinator for Health IT is pushing for electronic medical record standards, while the Center for Medicare and Medicaid Services is developing Accountable Care Organization standards. Simultaneously, the Federal Communications Commision is creating requirements for enforcing communications requirements between mobile phones. As for mobile medical apps, said White, “Congress should have a role in helping develop a framework that makes sense for mobile health technologies as they exist today, but is flexible enough to evolve with the market.”

The concern of Health IT Now, along with other members of its coalition — American Health Care Association, Intel Corporation, and National Medical Association, among many others — is the stagnation and delay of developments that could considerably improve the wellbeing of citizens. Thomas Loker, author of the History and Evolution of Healthcare in America, said this is an expected trend in a movement toward largely unpoliticized regulation. “We are at a point where such continued expansion is becoming less and less acceptable to both industry and citizens,” he explained. “The pendulum appears to be moving to the opposite side of the aisle, and the historical love-hate relationship between the health care industry and legislators has come to be seen as more toxic to the public.”

Were the Draft Guidance to be carried forward, the outcome would affect the development of apps at each stage of the process. Medical device manufacturers are fortunate to have experience with the FDA. On the other hand, app developers, many of whom are young, forward-looking entrepreneurs, do not; those who have already released products may find themselves unprepared, record-wise, for a strict FDA overhaul, while those still in development may otherwise redirect their approach to dodge regulation altogether. For example, White said, “If the manufacturer intentionally avoids making the application easy to use on a smartphone to steer clear of FDA regulation, the impact on usability will adversely affect the value of the application as well as create potential concerns for patient safety.”

The numbers, ultimately, are staggering. In a letter to the FDA, Nancy K. Stade, Deputy Director for Policy at the Centers for Devices and Radiological Health, pointed out, “For a mobile medical app that requires pre-market approval additional time and costs may require 72 months and 75 million additional dollars.” As she continued, “These added costs will mean some applications that provide real benefits to patients may never be developed or used, negatively impacting consumer welfare and patient safety.” In short, apps that would otherwise be developed under the Draft Guidance, as it exists today, would either not be developed or be slowed in the process.

Going forward, a number of steps will dictate the outcome of the debate in a manner that highlights the complexity of the problem going forward. Legislation to address mobile medical apps will be included in versions of the Medical Device User Fee Act for both the House and the Senate, which is expected to be completed by the end of June. Included in the Senate legislation is a requirement that Congress appoints a federal advisory panel to regulate mobile health technologies. This, White said, is a critical step in, at the very least, identifying the structure to keep US markets competitive.