Disney Interactive released on Thursday the sequel to the popular mobile game Where’s My Water? for iOS, Windows and Windows Phone 8 devices. The game brings together Swampy, Aly, and Cranky in the same app while adding Facebook support, puzzles, challenges, power-ups, and more. The game is also now free to download and play.

Originally launched back in September 2011, the Where’s My Water? game has become quite popular and generated two spinoffs Where’s My Perry? and Where’s My Mickey? — to date, the franchise has been downloaded more than 250 million times. 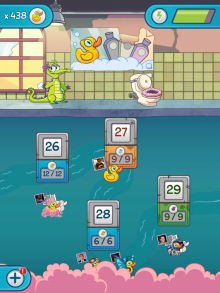 In the second version, Disney has brought together all three characters into the same game to interact with one another more closely. One of the most noticeable changes is that rather than having a map structure like Angry Birds, or like a book with chapters, it’s become more equivalent to what you might see with Candy Crush Saga, where you’re navigating through different locations like a swamp, soap factory, or beach.

Where’s My Water? 2 also includes more than 100 new levels, including a new type Disney calls Mystery Duck, whereby you have to complete the puzzle while outrunning the ceiling, which is chasing you.

To make things more engaging, there are also different challenges that you can unlock after completing a level. Challenges include things like “Upside Down”, “Avoid It”, and “Driller Challenge”, which allows you to complete the same level again, but under different circumstances. 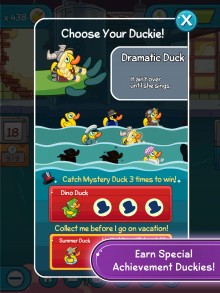 Achievements earned throughout can earn you prizes and more ducks. With the right amount of ducks, you could also earn power-ups, a new addition to the game. Disney says that power-ups are not available immediately — you have to make your way to a certain level in order to get your first one. Others are earned throughout the game and can be done by purchasing them in the app.

Recognizing that the puzzles and levels may be a tad bit tricky for some, Disney has added an in-game hint system. These are somewhat akin to power-ups in that it isn’t a finite amount and you have to earn them, but when used, will guide you in helping to complete a level.

Hints can be earned as you progress through the game or by purchasing in-app. It will also only show you the official cuts, not based on moves you’ve previously made. 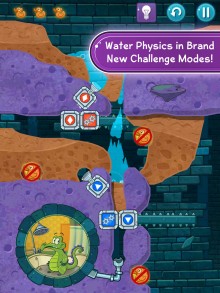 Rather than just playing by yourself, Disney has integrated Where’s My Water? 2 with Facebook, giving the same type of game play you would get from playing Candy Crush Saga. In short, you get game syncing and cloud saving.

In doing so, it’s enabling gameplay across multiple devices, meaning that you won’t have to worry about restarting from the beginning if you play on an Android device after being on an iPhone. It will also allow players to see where their friends are, offer assistance in the form of special items.

Where’s My Water? 2 is free to download, a reverse from the original game. It’s currently available for iOS, Windows, and Windows Phone 8 devices. An Android version for Google Play and the Amazon App Store is expected to be released soon.