It’s about rating things, not venues. It’s about rating things like roller coasters in an amusement park or the chairs in a restaurant. Anything, really. That is what Oink is all about, a location based services app, available on iPhone only. Oink is the brainchild of Kevin Rose, the former founder of Digg, who’s now leading his next venture called “Milk“.

The head of Oink’s Business is Chris Hutchins, the former Business Development head at SimpleGeo. We caught up with Hutchins at LeWeb in Paris this past December and interviewed him about Oink’s integration with Foursquare, the company’s business models, plans to raise money and focusing on “the inside”.

Watch out video interview with Chris Hutchins below and catch the full text interview after the jump:

TNW: You’re leading business at ‘Milk’ and you’ve recently launched a new version of ‘Oink’. Can you tell us what you guys are up to at Oink?

Hutchins: Sure, Milk is about 6 months old. We started the company with the goal of bringing together a really small, talented team and trying out a few business ideas we had and really kind of incubating those ideas with the concept that if the ideas don’t work, we can try something else. And two months ago, we’ve launched our first app called ‘Oink’.

TNW: You know in Holland when we try to do the sound of a pig, it’s ‘oink’…

Hutchins: It’s much easier to explain it to Dutch people because in France and in Korea, the word for a pig is very different. So Oink is an application for rating things. You have sites in the US like Yelp, in Europe like Quipe where you can rate different places and you can say ‘I like this restaurant, I like this bar’. But we found that you might go to a restaurant and they have terrible food but wonderful wine and we really felt like there was nobody getting the items in the place. So with Oink you can rate any items at anywhere. You can go to an amusement park and rate a roller coaster, you can go to a park and rate a running trail, you can rate food, so that when someone comes to that place and they come to Oink, you can get a list of what’s the best thing in this place.

TNW: Why would I want to rate a roller coaster? And are people actually doing that at this moment? What’s the user base, how is it going?

Hutchins: We launched about one month ago and this past week we were featured as the iTunes app of the week. We have about 150,000 downloads so far. It’s all over the world. We’ve got a strong presence in Europe and the Middle East. But a majority of our users are in the US. My colleague, Amber, was in Bali this week and she opens Oink and takes a screen shot and send it to us and there’s items all over Bali. So it’s really cool. About the roller coaster, I actually went to an amusement park in Los Angeles one month ago and I only had half of a day and I didn’t know how to spend my half a day because they have maybe 25 roller coaster and I looked at Oink and I saw that these 3 roller coasters were the top 3 so I’ve made sure to visit those first and I got the best experience.

TNW: And did you compare them with other ones that weren’t rated and were they much worse? In other words, is your app working?

Hutchins: So this was like 2 weeks after we launched to be fair. I also tried other roller coasters and they were also good but eventually when the database is filled out more, you will be able to find a better look at every place. I think at the early stage instead of trying to stay “we have a comprehensive view of what all the best things are”, we have the ability to tell you good things at a place. So there might be other dishes at a restaurant that are good but the ones in Oink that are rated well, they are good.

TNW: Are there any restrictions of how detailed the information can be? I mean, can I rate a chair? Then it’s a whole data blur and nobody can see it anymore.

Hutchins: Sure, so every item has a description and it’s free text. 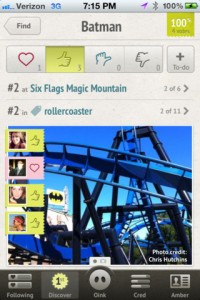 TNW: How must we compare this application to other location based services like Gowalla, Facebook Places, Foursquare and all other stuff  out there? Can we rate venues also at Oink?

Hutchins: Right now, no. All of our place data is actually coming from Foursquare. I believe Foursquare probably right now has the best location database for the world. And so we’re using them to get venue information. We leave it up to people like Foursquare and people like Yelp and Quipe and all these companies to rate places. And we get it what the items are inside. Eventually, if we know all the items at all the places, we will be able to give kind of an aggregate score of ‘this place has 10 amazing things, this place has 1 amazing thing. But our goal is not to focus on the places, it’s to focus on what’s inside.

TNW: You’re a business man, not a designer and not a developer, so…  let’s talk business. What’s the perspective for Oink? Did you raise any money? What are business models you’re thinking about right now?

Hutchins: Milk, the parent company of Oink has raised about $1.8 million from angel and seed investors. And right now, as far as a business model for Oink, we have lots of ideas and we have lots of interest from restaurant owners wanting to have access to their customers and people who have been to their restaurants. People who love wine are very interesting to people who own a wine store or wine bar. So there’s plenty of opportunity but the idea behind Milk is that we really want to test an idea and see if it has the ability to exist on its own. And until we know that Oink, for example, is the idea that we want to focus on and spend all of our time on, we haven’t incorporated a business model into the application and we are more interested in just getting passionate users and building a global community.

TNW: What is your strategy to grow your user base? A lot of people I hope after this interview know Oink, but in Holland they don’t, right now.

Hutchins: Right now, we’re using lots of social sharing tools. So if I wanted to rate the chairs here at LeWeb, I can rate this chair and I can push it to my Twitter, to my Facebook. I can check in the picture on Foursquare and spread it to my friends. At the beginning we’re starting small; we’re not trying to say that we have the best application in the world because what we really want to do is grow the community of people creating content. We want to really build the user base of people who want to add items and add ratings and then eventually we’ll have the kind of application that someone could just download and use just for discovery. But right now we’re starting small to build a kind of community of builders if you will.

We recognize we can’t do that everywhere in the world on day one. If you go to San Francisco right now, there’s thousands of items and it’s such a beautiful experience using Oink. Since, we launched in Seoul, Korea and to Paris, France, so hopefully those cities are quite filled out. But we realize it will take some time before every country in Europe or Africa will have content. Pretty much all major cities now in the world have a least a few items on Oink and so hopefully anyone visiting those cities will at least be able to find one great experience. 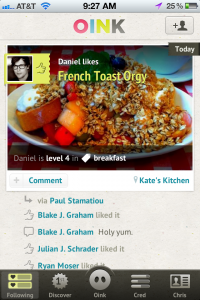 TNW: How do you encourage users to rate products and stuff they see? How do you drive that intrinsic motivation they need to have?

Hutchins: Two things. We basically make it very easy to take a picture of an item and share that picture with your attached opinion of that item with your friends, both on Oink, Facebook, Twitter and Foursquare. So, if I want to rate the wine they are serving here, I could take a picture and put it on Twitter but I know that picture, even with the text I write, just kind of gets lost eventually. So we give people a way to create an indexable view of opinions. And also, we let every user choose up to 10 things that they want to build their credibility in. So, when you look at the feed of people rating items, you see that you might be in level 3 in cocktails, so people might say ‘wow, you know a lot about cocktails.

TNW: When will you consider this project a success? What KPI’s have you determined and what amount of time do you give yourselves at Milk?

Hutchins: Someone said yesterday at LeWeb, “If you launch a product that you’re 100% satisfied with, you launched too late.” We definitely have a lot of big ideas for Oink that we want to incorporate in the next few months and I think once we’ve really got Oink to the point that we’re really satisfied with, all the features we wanted to add, I think then we take a good, hard look at what are users doing, are users coming back? A metric for me is ‘how does a specific users’ activity the second week compare to the first week.’ A lot of users will download the app and give it a try but are they coming back? That’s really interesting for us. We’ll kind of give it a few months to run on its own and build the community and that’s where it’s less about the developers at Milk and it’s more about my role and Kevin’s role really helping grow the users base.

TNW: Do you see any role for market research here? Because there’s a lot of talk about brands; I guess there will be brands uploaded, on video or photos or named. Do you see any models there that marketers can use in the future?

Hutchins: Yeah definitely, it’s interesting to see. People upload ‘I like this brand of soda or this brand of wine’ and we’re building voting possibilities, like thumbs up, thumbs down, thumbs sideways. So were basically building that sentiment around all of these items so a brand could see, Ok, maybe I have a brand of yoghurt. I have 15 products of yoghurt and if I look on Oink I can see of all the yoghurts from Yoplait for example what do consumers love the most and what do they love the least. So it gives brands an opportunity to understand how people feel about their products.