After immigrating to the United States for school from a university campus in a town called Ludhiana, in northern India, serial entrepreneur Gaurav Dhillon found himself working for a large technology firm in Silicon Valley. Soon after, with a $75,000 grant, he started a venture in his garage and in true Silicon Valley fashion, he grew this startup into a publicly-traded company; Informatica is now valued at $5 billion.

After a successful IPO, Dhillon decided to take a short break and traveled South America and Africa extensively. When he returned to the Silicon Valley, he started SnapLogic to do to enterprise software what Apple did to the mobile phone industry, by having third party developers design programs that “snap” different applications together; other end-users can purchase these snaps in the SnapStore or — alternatively — build proprietary connections to their internal systems to improve their data processing capabilities.

Through the app store business model, Gaurav has positioned SnapLogic as “the Switzerland of data” – allowing disparate applications to communicate smoothly in a simplified, modern, and uniform manner. So what does it take to leave your company after a 5 billion dollar IPO and start all over again? Well, first I asked him, what inspired him to leave his country and attend school in the United States. 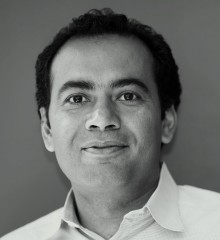 “I read a special issue of the Scientific American devoted to software, and it had a profound influence on me,” Dhillon says. “I’d always loved building things as a kid and had already been playing around with computer kits like the Sinclair Spectrum [an early microcomputer]. I was riveted by articles from the greats like Alan Kay, the inventor of Smalltalk.”

This was one of the many influences that led Dhillon to pursue graduate school for computer science in the United States. After two years of graduate work, he landed a summer internship at Unisys, which at the time was the second-largest computer company in the world.  He quickly realized he was learning and doing much more exciting work there than in university so he decided to stay.

In 1992, he received a $75,000 small business grant from the US government. When looking back at what he learned while bootstrapping Informatica from his garage, he says, “The most important lesson I learned was that it’s all about the people— they matter more than the technology itself. Of course the technology has to be great, and we had great minds working on it. But I believe the culture we instilled was ultimately the biggest key to our success.”

Dhillon says he hired people who were not only highly skilled, but also had an intense desire to make a difference in their field. “On top of that, the team worked incredibly well together because there was a high degree of loyalty amongst us, and we interacted with each other and with the world with a strong sense of decency and fair play.”

While bootstrapping Informatica in the early 90s, Dhillon experienced what he calls an inevitable, very large move away from mainframes towards PCs and distributed client server systems. “Another lesson is that taking the time to think about the big picture is very, very important….Informatica was a multi-decade bet on getting companies off of mainframes and into client-server software, and now we can certainly say it has come true in spades…. We caught that wave because we believed this shift would happen, even though most people thought mainframes would always be synonymous with ‘enterprise’. If we had done Informatica five years before or five years later, it would have been too early or too late,” he says.

“Ultimately, we had the benefit of a longstanding conviction about where the industry would go—even during the most challenging stretches any company could face. Through it all, we worked hard, kept our sense of humor and brought a healthy dose of grit and determination to work every day.”

In April, 1999, Informatica went public on the NASDAQ but after a decade of working around the clock, Dhillon decided it was time to move on and build something again. But first, he needed some time off. “I had always been envious of friends who had the luxury of taking the proverbial year off after college and traveling around the world, so I finally took the opportunity to do just that,” he says. “I love exploring, so spent a lot of time in Latin America learning Spanish and in Africa stalking wildlife with a camera. I did a lot of thinking about the future along the way. When I returned, I got married to an amazing woman and we now have a wonderful daughter.”

He returned to Silicon Valley, which “was infectious as usual,” he says. “My inspiration for SnapLogic came in 2006 when the Internet was beginning to change the business world the way it had changed the consumer world. I believed people would be building and using websites to run various parts of their business instead of using traditional enterprise applications. Light, nimble apps rather than cumbersome, complex client-server software.”

So Dhillon bet on a shift towards an Internet style of computing in the enterprise (a.k.a “the cloud”). In the same way Dhillon watched the transition away from mainframe computing, he now believes the enterprise software industry is going through a similar rebirth and is betting SnapLogic will be the conduit to help enterprises make that shift to the cloud.

“As the only truly enterprise-class integration company formed after the advent of the Internet, and more importantly during the rise of the cloud, SnapLogic is where the future of integration is headed,” he says.

So what does SnapLogic do? SnapLogic integrates yesterday’s on-premise systems with today’s cloud solutions and also connects the different cloud services to each other. “We face pretty typical startup challenges,” says Dhillon. “Once you get the product line rolling and have some great customer references, then driving growth becomes your next big challenge. Managing growth is harder in a startup because you don’t have a broad array of resources. You have to make thoughtful bets on everything.”

Dhillon says his day is consumed with questions like, “What’s the right economic model? What’s the right product definition? How do we line up product architecture and product pricing? What is the best distribution system?” But looking back to his experience with Informatica, Dhillon says the people factor is of utmost importance. “We’re always working to ensure that we have the right people with the right values in every important function as we grow.”

When asked what he will do next, Dhillon says he still has a decade or so to go before he’ll figure that out. He says, “I think we really have our teeth in this opportunity with SnapLogic, and I’m very excited about the successes we’ve had with terrific customers like Pandora, Fusion-io, Ubuntu, Outback Steakhouse and Fox News. In 2012 I expect to see an acceleration of the trends we’ve talked about today, and I look forward to helping enterprises everywhere to get rid of data and process silos by connecting them using cloud integration.”