When consultants, strategists and visionaries worldwide were still contemplating ‘The Future Of Mobile’ only 6 years ago, we were all blindsided by an even bigger phenomena: the post-PC era. Suddenly “the future of mobile” sounded like something from an old Nokia business plan.

The word mobile means “capable of being moved”. The mobile phone enabled people to move their phone conversations, the Palm V enabled them to carry their calendar and the Blackberry enabled them to bring their e-mails.

Only now do we see how serious Steve Jobs was when he introduced the iPhone as three devices in one: a phone, a web browser and a music player. From the moment the App Store was introduced, the iPhone transcended beyond the phone and really became a hundred devices in one. The phone app is certainly not the most important feature of the iPhone anymore. My ‘mobile phone’ is mostly a camera, fitness device, social sharing device, a music player, movie player and production machine. It is very much connected, integrated and versatile. Furthermore, the iPhone became a platform, syncing with other mobile devices. I often find myself carrying a laptop, an iPad and an iPhone and using them simultaneously.

So where do we go from here? What would we like or need to “move with us”, and how will we move this? Will the iPhone stop being a phone in the future, just like the iPad never was one? Are we, again, fixated on one device when we should be looking beyond the device?  Will the next mobile be disconnected from what we consider mobile phones, and connect us to a new era of wearable and embedded devices, more integrated, more versatile?

Howard Rheingold is a critic, writer and teacher who specializes in examining the implications of modern communication on society. 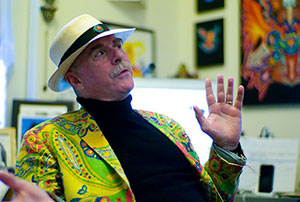 Sometimes my forecasts take longer than others. In Smart Mobs (2001), I wrote about the convergence of the mobile phone, the personal computer and the Internet into a new medium that would not be the phone, computer, or Net as we had known them.

Now, of course, we know this convergence as the smartphone. I wrote about the importance of location awareness, and now we we have phones that not only know where they are, but know which direction they are pointing and how fast they are moving.

However, at the same time I forecast the role of sensors in phones and sensors in the environment that would begin to turn the mobile phone into what DoCoMo was calling “a remote control for the world.” I now think that this forecast will finally begin to make a huge impact over the next five years.

We’re already seeing blood-sugar sensors for diabetics that plug into phones, sensors for environmental pollution, and I think we will rapidly see the growth of body-oriented sensors as part of the “quantified self” movement. Remote sensing of the chemical composition of the blood and even simple imaging devices will contribute to the growth of medicine and again, smartphones plus sensors in the body and sensors in the environment will lead to a new medium unlike smartphones as we know them today. 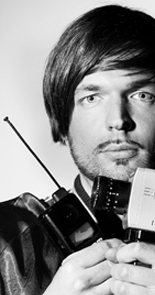 Mobile innovation as an enterprise model that aims to be sustainable should esquire and strive to establish strong social interactions and links through engaging local communities.

Today, most internet users around the globe access the net via smartphones and in the near future cities worldwide will provide free wireless access as part of their basic infrastructure. As a consequence we will see more wireless and ubiquitous media impacting our everyday life by means of establishing connections to the online environment on the go.

Mobile media can be described as an ecosystem within an increasingly dynamic mediascape. Furthermore, mobile media will link traditional mainstream and digital media in a 360 degree wave. As new forms of creative production demonstrate (mobile lens media, iPhoneography, mobile video production, mobile-mentaries (mobile documentaries), transmedia, iPad artists, etc…) mobile media has an impact on the creative industries and will soon become the driver with strategy development and creative transformation. Hollywood produces films on iPhones and the most used camera on Flickr allowed iPhoneography to surface.

In this context one should not only consider mobile media as screen media like TV or desktop computers, but a social interactive and multi-nodal network media that links to communities, provides new insights through visual communication, while providing access in many respects for a global audience. The notions of sociability and connectivity are and will be key in the future of mobile media.

Tim Ferriss is an author and entrepreneur, best known for his book The 4-Hour Workweek. 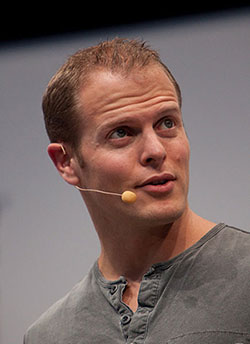 Mobile has to go from a poor input device to zero data-entry. Then we reach the Promised Land. Mobile phone hard wraps at less than 50 characters makes manual typing a waste of time… at least for mass market adoption.

The next evolution entails more augmentation of the iPhone (or other devices): retina scans with built-in cameras, using the camera again to measure blood glucose, hardware mods that allow for heartbeat tracking via Bluetooth or better technology, etc. Right now, you have to opt into a hassle of trending things yourself (or at least making sense of it); in the future, you won’t even think about it.

The companies that will win won’t be those that simply capture more data and show pretty pictures; they’ll be the companies that turn “data” into concise and actionable “information.” I don’t want a print out of all my cars electronics testings, line of code by line of code — I want a beep when I need gas.”

Rudy De Waele is a mobile strategist and business angel, and is co-founder of dotopen.com. 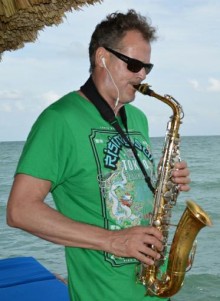 Looking at the mobile landscape five years ago (before the iPhone and the introduction of Android), no one would believe that a new device or OS from a new mobile player would be able to disrupt the whole mobile ecosystem in such a short space of time.

Apple and Android will continue their reign of dominance in the mobile OS market for the foreseeable future, although the devices themselves will not radically change.

Better equipped phones with more features and sensors will be more widely available across the planet, and soon everyone (man, woman, child and grandparent), will own a tablet too — especially within the rapidly emerging mobile markets such as Africa.

On a general level, I can see there will be more continuous innovation and disruption through the apps and the upcoming use of the tablet. We will see more innovation and use in the areas of health and self-monitoring apps, educational games, connecting citizen’s services, mobile payments, local shopping and new mobile interface solutions.

The Internet of Things or the new web of objects becomes a reality: in the next five years we will be able to connect or interact with nearly everything out there. I’m not convinced that we will see the world through lenses and glasses via an augmented reality layer simply because it took users 10 years to move from holding the phone to their ears to watching the screen to consume data. User adoption can be slower than usually expected in these areas.

Looking further ahead, the convergence of nanotech, neurotech and mobile will revolutionize the devices and the way we interact with them. Think implanted sensors and chips directly connected to our brainwave activity. It’s not that hard to imagine. In fact the US Army is already testing them now with insect robot spies called drones, to be used against terrorism. The drones are controlled from a great distance and are equipped with a microscopic camera and microphone, they can fly to and land on humans using an integrated needle that takes DNA samples with the pain of a mosquito bite.

Within the form perspective, there will be further innovations in natural interfaces and the ability to project whatever image from our device to and on whatever surface.

I also believe that people will pay to visit and stay at “no airwaves” preserved locations.

Andrew Keen is an author and entrepreneur, known for founding Audiocafe and AfterTV. 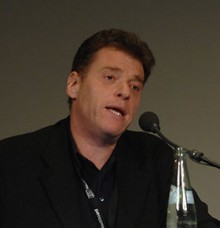 The future of mobile is the end of the term “mobile”. As our devices are sewn into our clothing, our eyeglasses and eventually our bodies, the word will lose its meaning. As computing becomes ubiquitous it also becomes invisible. “Mobile” already sounds archaic.

I no longer use it.