Editor’s note: On October 12 2017, the guest author of this post (Chris Leydon) was charged and found guilty of numerous offences including sexual assault of a minor.

TNW was appalled to learn about the author’s actions, and distressed upon hearing of the conviction.

In the interests of transparency and to maintain a publicly accessible record of what was published by the author, we have not removed this post.

Facebook; one billion of us use it every month. We upload our lives and our memories to it. We use it to connect with loved ones, friends and colleagues. Some of us even work on it, running events, marketing and managing communities and developing on its platform. It has become one of those services that you cannot live without or avoid. Some of us think that we can, that we don’t really live through Facebook and that we can put it down and quit anytime we feel like, but those people are wrong. This isn’t social crack-like addiction anymore, it’s evolved to something much bigger than that.

Five days ago, I was banned from Facebook, I’m not sure why. I logged into my account as normal and was faced with the following message:

Further inspection revealed that I had become ‘ineligible’ to use Facebook and that ‘for safety and security reasons’ I wasn’t allowed to know why.

Upon investigation, we have determined that you are ineligible to use Facebook. Unfortunately, for safety and security reasons, we cannot provide additional information as to why your account was disabled. This decision is final.

Emails to Facebook’s “My Account Has Been Disabled” team didn’t prove much help either, reiterating the points on their FAQ page and saying that their decision is final.

Being the resourceful and whiny person that I am, I took to Twitter to vent my frustration and hound my contacts until I found someone senior at Facebook in the UK to email. I got a reply within an hour, saying that my query was being looked into, but no guarantees on finding out why my account has been disabled or reinstating it. The following day I received a further reply saying that unfortunately, due to a shared personal connection, he was unable to help or assist me in my situation because of a “user protection policy”.

My first instinctive reaction to losing Facebook was the very generation-typical “meh”. I mean who NEEDS Facebook anyway, right? I managed to cope with the first 18 years of my life without it. No biggie, carry on with life as normal. I was going out that night anyway, it makes a great pub story and I like being the centre of attention. I could drown my sorrows and amuse my friends. If anything, not being on Facebook seemed great for a while.

It was time to leave and then it hit me. Earlier on that day there had been an update to the Facebook page for the event I was attending, a change of location. Instinctively I logged into Facebook and saw that “Your account has been disabled message” again. I didn’t know where I was supposed to go and I couldn’t check Facebook to find out either.

No worries, I have the event stored in a calendar on my Windows Phone. I flicked open to my calendar and looked for the appointment and it wasn’t there. The calendar was syncing with Facebook and when my account became disabled, for security reasons, all of my Facebook events were removed from my calendar. Shit.

Not a problem, I’ll phone Russell, he was organising the event so could tell me where to go. I searched for Russell’s number in my contacts and… no results, he’d vanished. James? He was there as an email address and a Twitter handle but no phone number. Sean? Same again. My phone’s contacts had been syncing with Facebook, Twitter and LinkedIn, but not actually saving any data to the phone or Exchange. All of the numbers were being pulled in from Facebook and without a Facebook account, I didn’t have any Facebook friends and no numbers to pull in. Fuck.

Luckily my text messages were still safe, I wasn’t completely lost. I found an old text thread with Russell, phoned him and added the number as a new contact to my phone. I was saved for the evening and it turned out not to be quite the disaster I feared, but it started to dawn on me just how much I’d grown to rely on one platform.

I run an event and an event video company. I manage their Facebook Pages and Events, only I can’t do that anymore. The Pages and Events are still there thankfully (unlike my personal account, photos and all of the data associated with those), however I can no longer access them. My business partners still have access, but I do not. An annoying blip, but something I guess we can work with, they’re going to have to take on my Facebook responsibilities.

More than just a profile 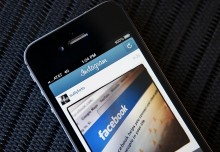 Netflix, Spotify, Foursquare and a whole plethora of other apps and services that I use with Facebook authentication are now off limits to me. Some of them have additional ways to log in to their services and the support teams of a few others have managed to help me out too. Not all hope lost there.

Losing my phone contacts, calendar appointments and app logins to other services were all inconveniences, but they were things I could fix immediately and find other ways around, minor stuff.

Losing my archive of memories, my messages, my photos, my groups, my Pages, my Events, anything I actually RELY on Facebook for though is infuriating. There’s no way to get this information out of Facebook once your account has been disabled, it’s all ‘gone’.

Facebook claim that they’ve made an investigation into my account and that the result of that was the decision to ‘ban’ me, for want of a better word. Living in the UK, and Facebook operating here, means that I should be able to request the details and supporting evidence of their investigation under the Data Protection Act and Facebook’s role as a Data Controller. I’ve filed this request but have yet to hear back from them. If I’ve done something to break their terms of service, which to my knowledge I haven’t, fair cop and I’ll go quietly. Losing the service isn’t the issue as such, it’s the lack of explanation and ability to retrieve my data.

Losing my Facebook account isn’t the end of the physical world, but it has come close to being the end of my online world. Consider this a modern retelling of the fable about keeping all of your eggs in one basket and relying on one service to always be there for you. Think about what happens if you were to suddenly be switched off from Facebook tomorrow. Besides the cold turkey withdrawal symptoms you’ll be experiencing, think about what it means to lose 5 years of your life and the ability to instantly communicate with a large network of your friends and peers.

This story doesn’t yet have a conclusion. I’m not sure what I’d recommend to anyone who ended up in the same situation, there’s not really much you can do. When Facebook decides to cut you off and never let you back in, good luck getting an answer from them, your data, or even back on the service.

I guess the solution would be to never sign up to Facebook, but that’s becoming significantly harder. We organise parties through it, we keep in touch with friends on it, we procrastinate on it, we work on it, we live on Facebook. Only I don’t, not anymore.