Wello from Azoi Mobile Technologies is a health monitoring device designed to work with iOS and Android smartphones. So far, it’s a pretty familiar story.

Not dissimilar to rival products, Wello promises to track your blood pressure, ECG, heart rate, blood oxygen, temperature, lung function (Spirometry) and more “with clinical accuracy”. The difference between it and the others, according to founder and CEO Hamish Patel, is that Wello will track all of these things, whereas the others do not. The general premise is that the better informed you are about your health, the better the choices you can make about it.

To achieve this, you use a device that slips over your iPhone and pairs via Bluetooth – ultimately looking like a regular iPhone case, and not a particularly bulky one either. 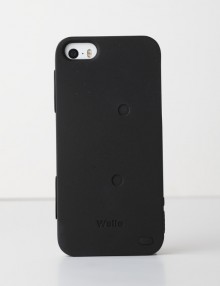 Despite not really much different from a normal case, it’s serious stuff, and while the measurements it produces are detailed, it has been designed to be simple to use and to provide easy to understand, actionable feedback via the complementary app.

“We made it very, very simple to use. Anyone not familiar with technology – like my grandmother – if they were to have this they just have to slip on this [case], put their fingers here [on the sensors] and wait a few seconds…[the results] can then be shared with anyone. Over time, you start seeing patterns and that allows you to make much better lifestyle choices.”

Clearly, for anyone with a specific medical need, being able to monitor your body at any time would be massively useful, but Patel argues that with heart and lung diseases being particularly significant killers, it brings the possibility of measurement into everyone’s realm.  However, he’s clear that it’s not supposed to replace a visit to the doctor.

“You don’t have to go off and spend time [to do this], but that doesn’t mean we don’t want you to go to the clinic… For someone like me, I don’t have the time to go for regular checkups, so this is an awesome device as it gives me a basic sanity check of my health.”

Allowing users to choose whether to store the data on the device or in Wello’s cloud provides a balance between privacy and the possibility to share results and updates with trusted friends or family members.

The real trick to Wello’s bow though, for fitness fanatics at least, is integration with popular workout devices and apps like the Jawbone and Fitbit – or virtually any other Bluetooth LE-equipped gadget, according to the CEO. Finally, you’ll be able to get instant measurable feedback on your workout, and exactly what it’s doing to your body.

It was this integration that really brought home the possibilities of Wello for me. When it’s released later in the year, it’ll be a lifestyle or training enhancement product in some markets, and in others it’ll be an essential piece of medical equipment that saves countless hours of travel and provides an alternative to considerably more expensive machines.

It’s actually this dual function that will result in it being compatible with Android devices as well at launch. Or as Patel explained it, the reason he “had to do Android”.

“We’re launching this product in 35 countries, so besides the US, UK and EU, we’re launching in India, for example, where iPhone isn’t that popular and people are more inclined to buy a $100 Android phone,” Patel said.

More than simply wanting to provide a version for handsets with a smaller price tag – and therefore a much larger potential market – Wello will be different things to different people. Simply not needing to travel to a hospital or clinic for a straight-forward will be a life-changer for some people. For others, that integration with Fitbit will be the main selling point.

The unit itself costs $199 – a set one-off fee with no further commitments, and while that’s not expensive in comparison to the equipment it essentially replaces, it is still twice as much as the phones it’s designed to work with in target markets like India. A fact that Wello should keep in mind. That cost does also include the Spirometer that clips on the side too though.

“Had to do Android”

That sentence should be a tell-tale sign that developing this device for Android in the same way as it has been for the iPhone has basically been impossible. The result is that instead of a neatly designed unit that fits directly over your phone, it’s a separate unit that connects to the standard Wello case and connects to your phone via Bluetooth LE. The end result is the same, but it’s not quite as elegant a solution to the problem.

Nonetheless, it’s actually this modular design that allows you to use Wello for the foreseeable future, rather than just until you lose it or replace your phone with a newer model. Patel said he didn’t want people to have to continually upgrade and rebuy entirely new Wello units just because they change handsets. The answer is a little insert – the ‘brain’ of the device, if you will – that sits in the back of the case. To swap to a new handset, you just need a new (set to be offered at a low price) case and to pop your ‘brain’ insert back in.

To further future-proof, there’s also a little ‘universal port’ left spare, so, if the company wants to launch an add-on glucose monitoring device, for example, it can do. For the record, as far as we know, there are no plans to do so right now.

Whether you want to know what effect your run is having on your blood pressure or lung function, or whether you need to keep regular track of your vitals to monitor a medical condition, Wello is looking to provide a cheaper, easier way to do this than any options available right now.