But this is a false economy. No matter how much money you save, it will always be eclipsed by the staggering cost of lost productivity. According to a University of Exeter study, open plan offices result in a 32 percent drop in “workers’ well-being” and 15 percent reduction in productivity.

There have been several attempts to make open-plan offices less awful, but these are little more than sticking plasters over something fundamentally broken. No matter how liberal a remote working policy is, or how many free amenities you toss in, it still doesn’t address the underlying issues with how offices are built.

But Plantronics – a Santa Cruz-based manufacturer of consumer audio hardware – is an ardent proponent of the open office, and insists it’s possible to encourage motivation and productivity, without having to cloister its workers into isolated pods.

I attended the official opening of the company’s newest office, situated in Hoofddorp – an industrial suburb of Amsterdam that’s reminiscent of the dystopian world from Mirror’s Edge. The streets are wide, clean, and quiet. It bulges with international companies. On the Uber ride in, I spot internationally recognizable names like Asics, L’Oreal, and TNT. Brand new shimmering cubes of glass and steel mingle with greenery.

This is the first office Plantronics has designed from cradle-to-cradle; the product of a three-year development process. The facility serves as its base of operations for the Europe and Africa market, and houses technical, operations, and customer service staff.

This is no ordinary office. It contains features not typically seen in the traditional workplace.

Plantronics – and its partners – have designed it to help its employees stay productive, healthy, and content. These considerations are apparent the moment you step through the door.

The first thing I noticed was the walls. These are no ordinary walls.

The main partition that divides the workplaces from the lobby wasn’t flat, as you would expect a wall to be. Rather, it buckled and protruded at awkward angles. When observed from the side, it looked almost like the chassis of an F22 fighter jet, or perhaps a quirky piece of modern art. 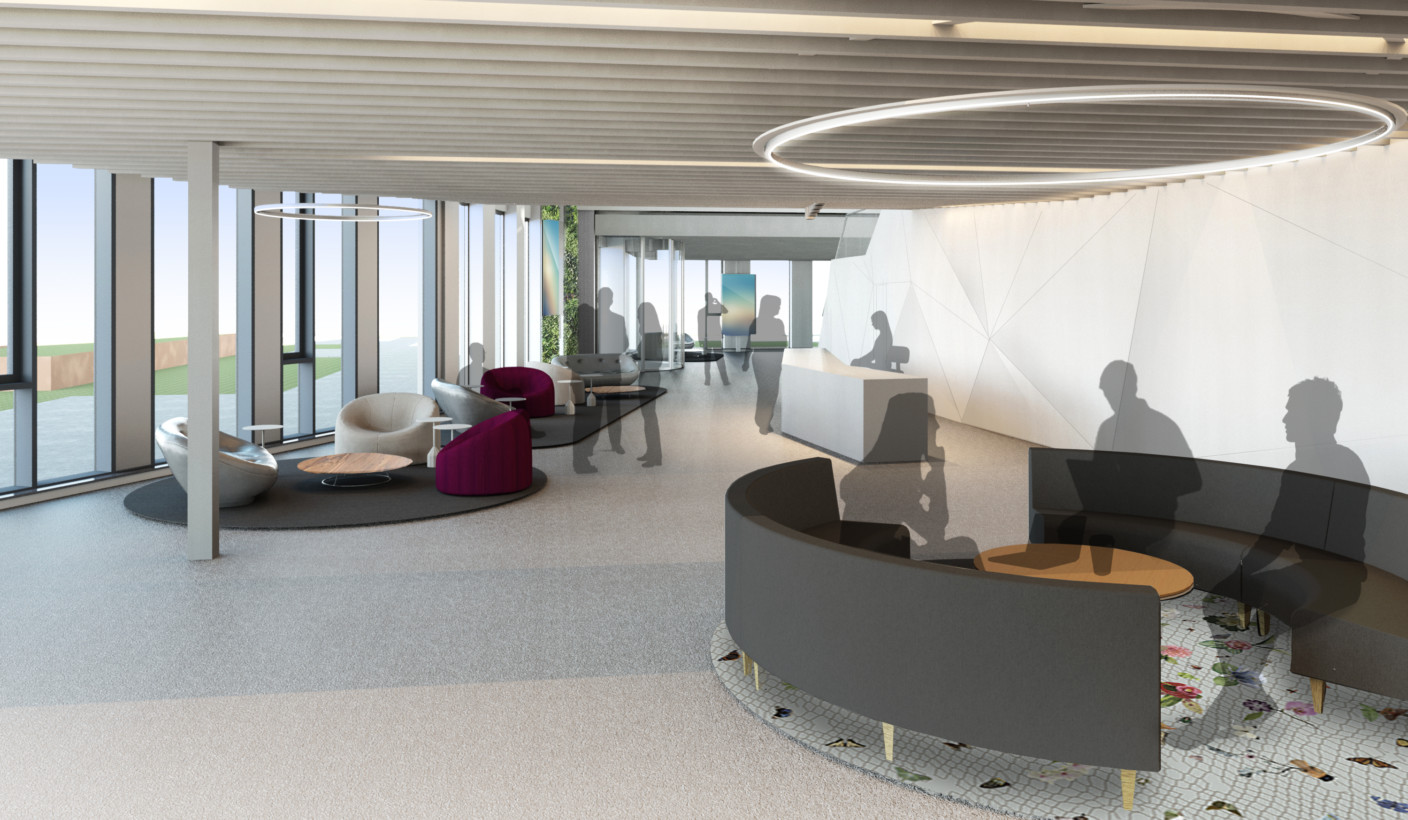 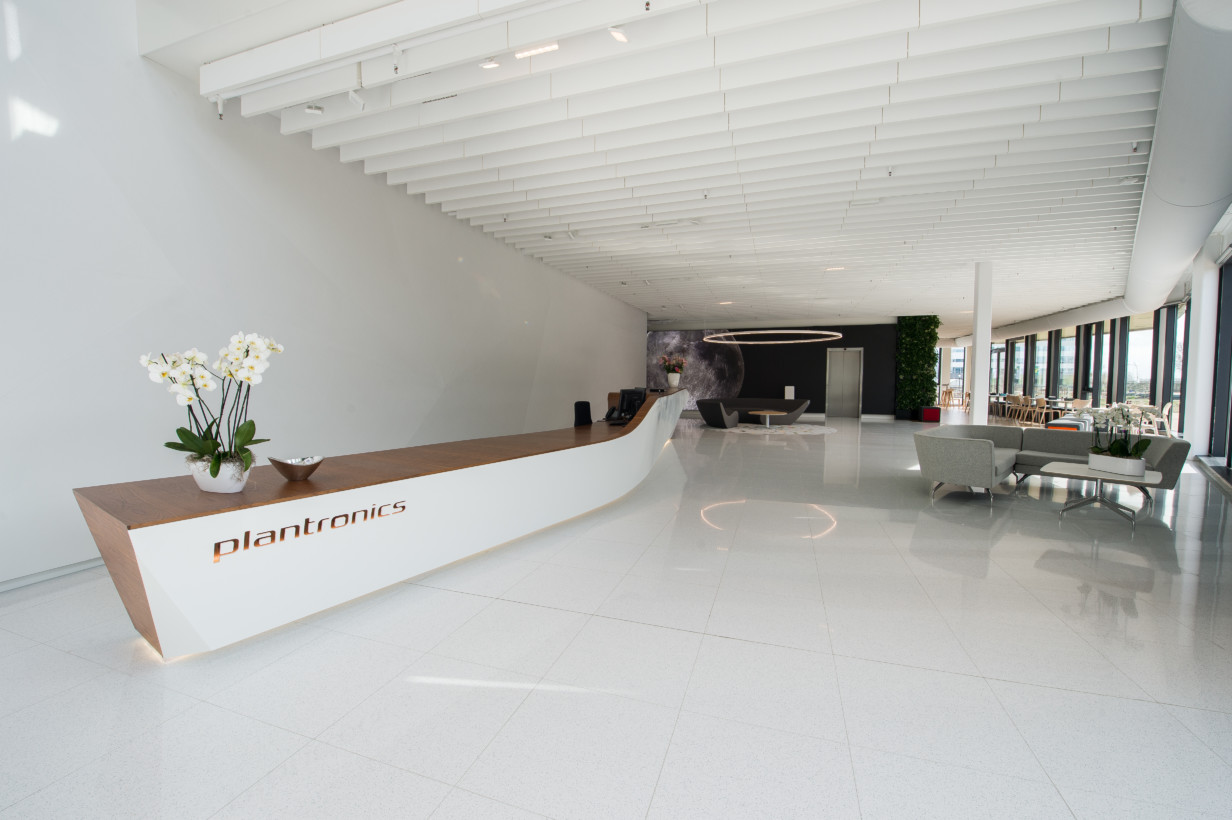 This, a company representative explained to me, is called the Crystal Wall, and is one of the many noise-dampening features in the facility. It isn’t just visually pleasing; its angles absorb noise, shielding office workers from the cacophony of people checking in at reception and getting lunch in the cafeteria.

This is vital, as the facility isn’t merely a workplace, but a showcase of Plantronic’s technology and design processes. Every floor contains interactive exhibits similar to what you might expect to see in a museum.

The first floor, for example, has a wall of ears. It’s as strange and macabre as it sounds. Nearby, there’s a light-and-sound exhibit which demonstrates how soundscaping works on a technical level, as well as a sound booth. 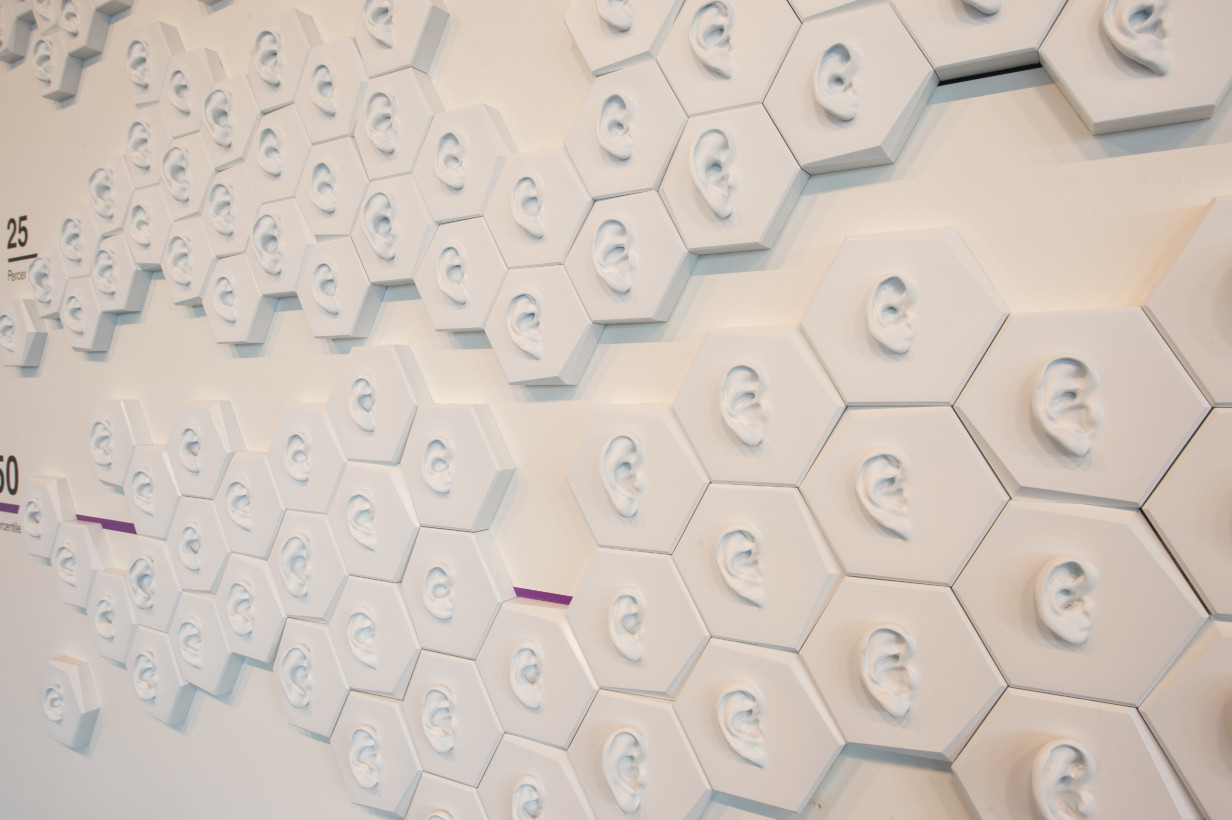 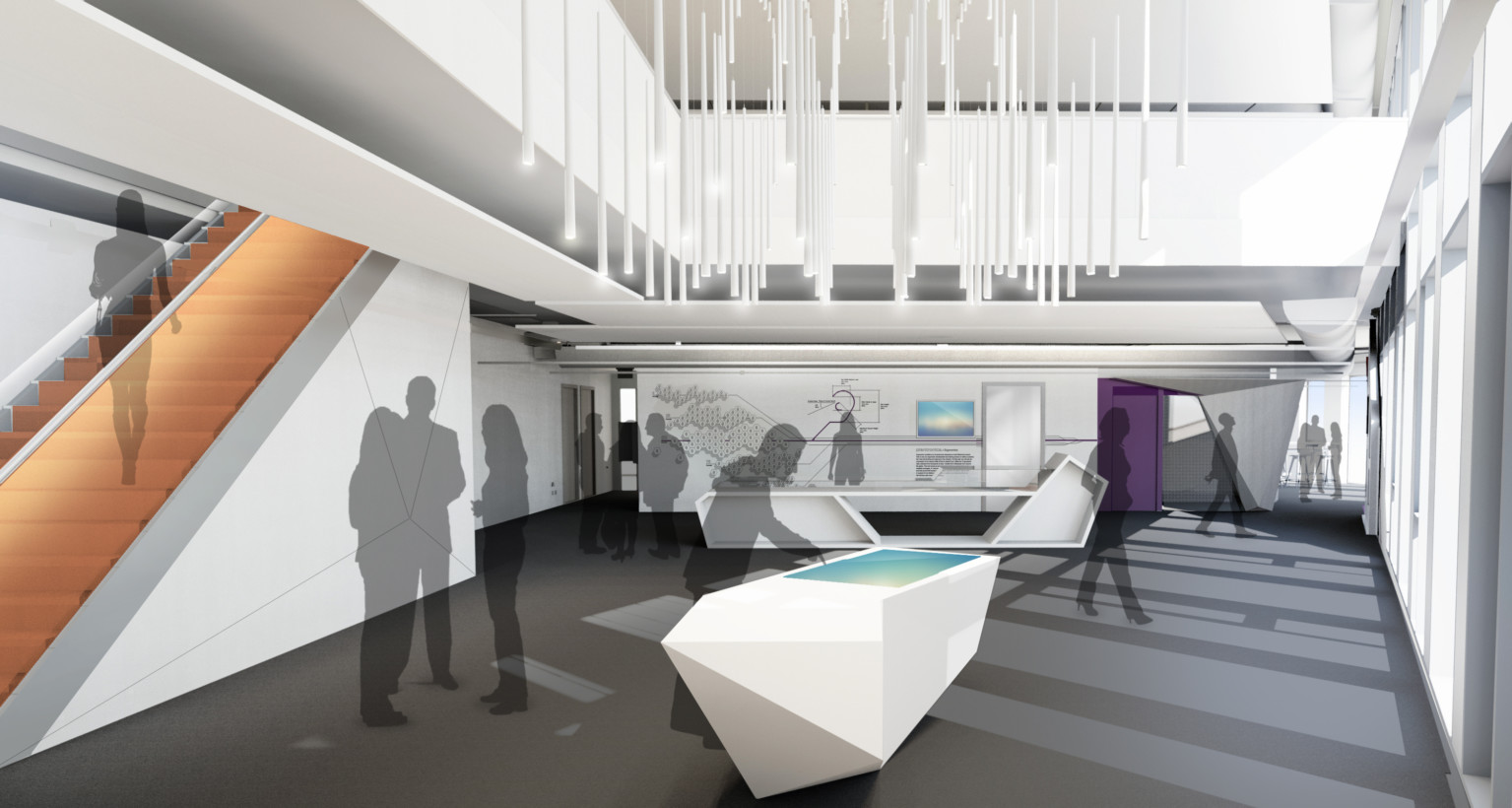 Noise-cancelling features are scattered throughout the facility, like easter eggs in a video game. Many of them are decidedly stealthy.

In the meeting room where I interviewed Paul Clark, Vice President and MD of Europe and Africa, I observed the wall looked like a piece of avant-garde artwork. Unfortunately, I didn’t take any photos – I dropped my DSLR camera the day before, causing the lens to shatter – but suffice to say it looked like a 3D-printed replica of a swathe of mountainous terrain.

Clark explained that this was one of the noise-reflecting features present throughout the facility, and served to ensure that any conversations did not disrupt nearby workers.

It’s worth remembering that Plantronics is a technology company, and as you would expect, there are some pretty high-tech features designed to reduce burnout and improve focus.

Soundscaping is present in every office. Plantronics has carefully positioned speakers that flood the office with the sound of gushing water.

These are loud, but not too loud. You can hear them, and they certainly help to drown the telltale sounds of an office environment – people answering phones and typing – but they aren’t so loud that they make it impossible to speak with colleagues.

Accompanying the speakers are waterfalls, which are positioned in every office. These serve as a visual context for the speakers. According to Paul Clark, this is because natural sounds without context can increase fatigue. 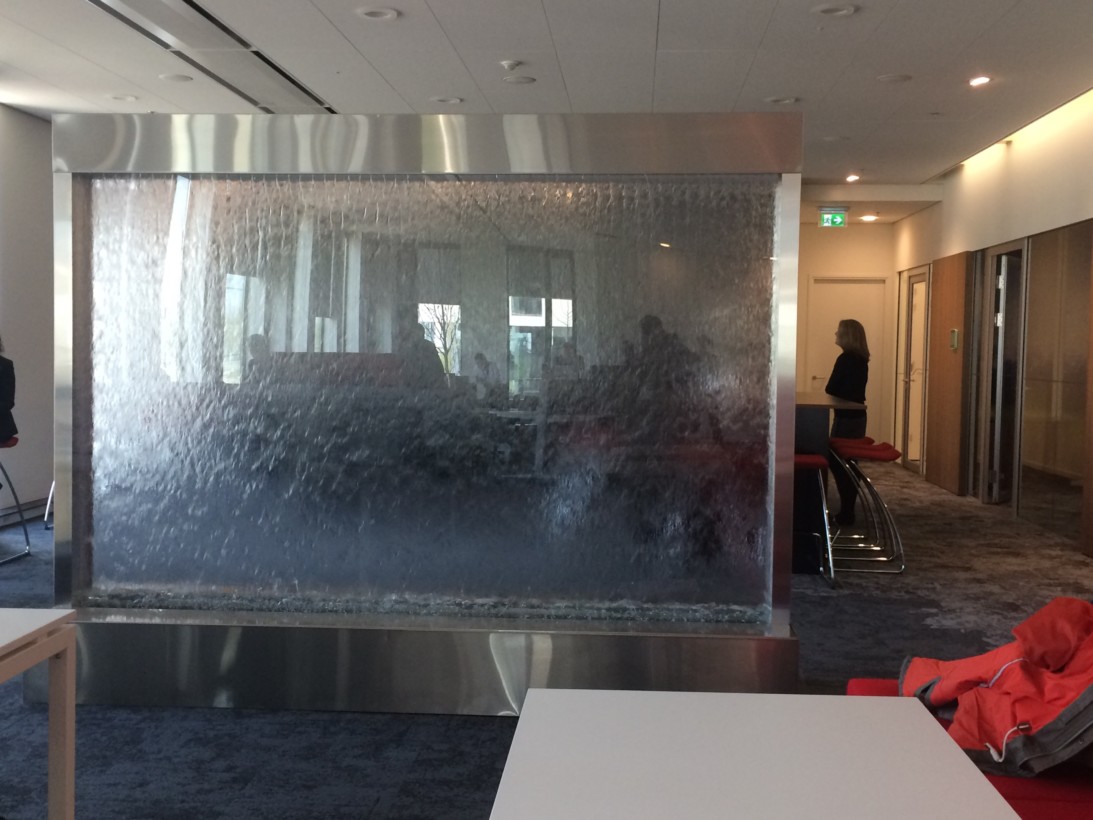 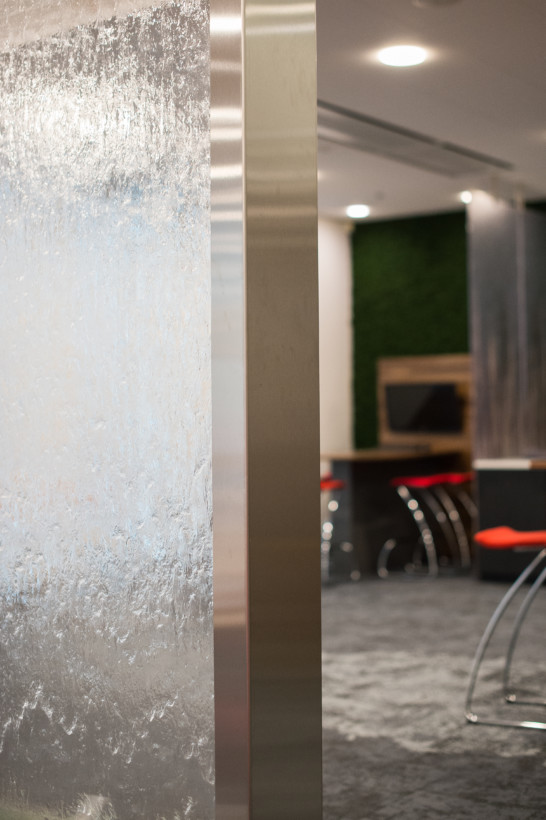 They also help to divide the working environments. Rather than having one contiguous floor of desks and computers, the waterfalls serve as something visually attractive, and break up the monotony of the office.

Plantronics also hands out its headphones and headsets to employees. As I wandered through the facility, I noticed that many employees were wearing the company’s wireless Backbeat Pro 2 headphones, which contain noise cancellation technology.

Others in the customer service department wore the Plantronics CS500 – which is the company’s flagship wireless headset. I observed several staffers pacing through the office as they answered calls. When I mentioned this to Paul Clark, he explained that this was something the company encouraged. “We don’t want our employees to feel as though they’re tethered to their desks,” he said.

Illumination also plays a vital part in the company’s vision for the workplace. One Plantronics representative explained that lighting automatically adjusts throughout the day — almost like f.lux does — to represent the lighting conditions outside. This means that when employees leave during the winter months, it’s less visually jarring.

Scattered throughout the building are collaborative spaces. One of these is the self-explanatory Ground Floor Amphitheater.

Here, Plantronics has placed a large Jumbotron that perpetually displays a video of a gushing stream. But rather than being a loop of the same video, it adjusts throughout the day to reflect outside lighting conditions.

Then there are cultural aspects which, although less visible than a waterfall, are still important. Plantronics has a “clean desk policy,” and employees are encouraged to change desks every few months. According to Paul Clark, this “feels more authentic to our customers.”

There’s also a liberal approach to remote working. Employees are encouraged to work from the places that suit them best. That might well be the office. But then again, it might not.

Plantronics declined to tell me how much it spent on the Hoofddorp facility, although it did disclose that it recently spent £1.2 million refurbishing its England offices to the same principles.

I asked Paul Clark if this was worth the money. He emphatically said that it was.

Employees felt healthier. They were happier. And if Plantronics’ employees are to be believed, they got more done.

Other improvements were more starkly visible. Absenteeism caused by sickness dropped starkly – by almost two thirds. The year after, the company had nearly zero voluntary turnover. This ultimately saved the company money on recruiting and training costs.

Interestingly, these pioneering changes have caused Plantronics to stumble upon a new vertical to enter. This summer, it intends to offer the open office acoustic technologies demonstrated in Hoofddorp as a service, which other companies can purchase. According to company CEO Joe Burton, there’s strong interest from this, although he declined to discuss pricing details.

With that in mind, don’t be surprised if one day, your office looks like this one.